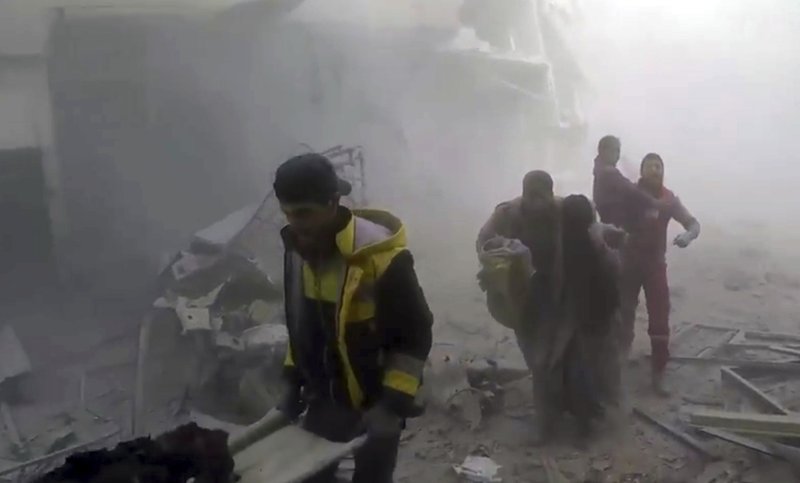 BEIRUT, Feb 27:  A Russia-ordered “humanitarian pause” has gone into effect to allow civilians to leave a rebel-held enclave near Damascus, giving a brief respite to the residents of the besieged area that has been under intense attack by the Syrian government for weeks.

Syria’s state-run Al-Ikhbariya TV broadcast footage from a crossing point manned by the Syrian military between the enclave, known as eastern Ghouta, and Damascus, saying preparations were underway to allow civilians to leave, including those in medical vehicles. The TV said a restaurant was also set up there.

Russia’s state news agency Tass said Russian military police on the ground have set up the humanitarian corridor with the Syrian troops.

The Wafideen crossing point is near Douma, one of the largest towns in eastern Ghouta, and is about 20 kilometers (12 miles) from the center of Damascus. The TV showed small buses waiting at a parking area, but there were no signs of anyone coming out of the enclave.

Al-Ikhbariya’s journalist on the ground said mortar shells had targeted the crossing, preventing civilians from leaving. It was not immediately possible to verify the claim. A least a couple of mortars were heard as the broadcast was live, some appeared to be outgoing from government areas.

The director of the Syrian Observatory for Human Rights, Rami Abdurrahman, said about five shells from government areas fell on the enclave. One shell fell in an area where the government had begun a ground offensive, and it was not clear if it was fired by the government or the rebels.

The Russian five-hour humanitarian pause, ordered by President Vladimir Putin, comes as a U.N. cease-fire failed to take hold in eastern Ghouta. Residents and aid groups criticized such unilateral truces for lacking international monitoring and consensus of all the parties.

Ingy Sedky, spokesperson for the International Committee of the Red Cross, said humanitarian corridors need to be well planned and must be implemented with the consent of parties on all sides.

“This is essential so that people can leave safely if they chose to do so,” she said. “And for those who decide to leave, all measures should be taken to provide assistance, protection and shelter to them. And those who remain must be protected from any attacks.”

The enclave’s residents fear they could face harassment and possibly arrest if they go into government areas, after years of living in the rebel-held enclave.

A weekend resolution unanimously approved by the U.N. Security Council for a 30-day cease-fire across Syria failed to stop the carnage in eastern Ghouta where more than 500 people have been killed since last week.

At least 34 people were killed on Monday by airstrikes and shelling, according to the Syrian Observatory for Human Rights. The U.N. estimates that nearly 400,000 people live in dire conditions from the siege in eastern Ghouta, which has been under intensive bombing by government forces for weeks.

Rami Aburrahman of the Syrian Observatory for Human Rights said violence has dramatically declined in eastern Ghouta overnight but reported a number of shells on Tuesday morning. It was not immediately clear where they landed or who fired them, Abdurrahman said.

Firas Abdullah, a Douma activist, said a bomb landed in the town after the pause began, as well as three ground missiles.

Civilians caught in the violence have mocked Putin’s order of a five-hour open corridor, saying it gives only a couple of hours of calm before violence resumes. The Army of Islam, which is the largest insurgent group in Ghouta, said the Russia-ordered pauses circumvents the U.N. resolution.

Russia’s military campaign to support Syrian President Bashar Assad has helped turned the tide of the war in the Syrian government’s favor.

The eastern Ghouta residents also fear their region would meet the same fate as the eastern, rebel-held half of the city of Aleppo, where a similar Russian-ordered pause in 2016 called on residents to evacuate the area and for gunmen to lay down their arms.

Abu Ammar Dalwan, a member of the Army of Islam in Ghouta, said government shelling continued after the cease-fire and helicopters were flying overhead. He denied his group was shelling the Wafideen corridor.

Dalwan said Ghouta residents had decided to stay following years of violence, even though they had the option of leaving through tunnels which were operational until the recent assault began.

Dalwan said evacuating people under the threat of shelling amounted to a war crime. “We want the international community to stop such a war crime,” he said.

Nepal goes down 2-1 to Tajikistan on home ground

KATHMANDU, Sept 6: Nepal suffered a 2-1 defeat at the hands of Tajikistan in the AFC Asian Cup 2019 Qualifiers on... Read More...

LAHAN, Aug 31: A little girl was injured after a cooking gas cylinder suddenly exploded in a house belonging to... Read More...