Nepal goes down to Palestine 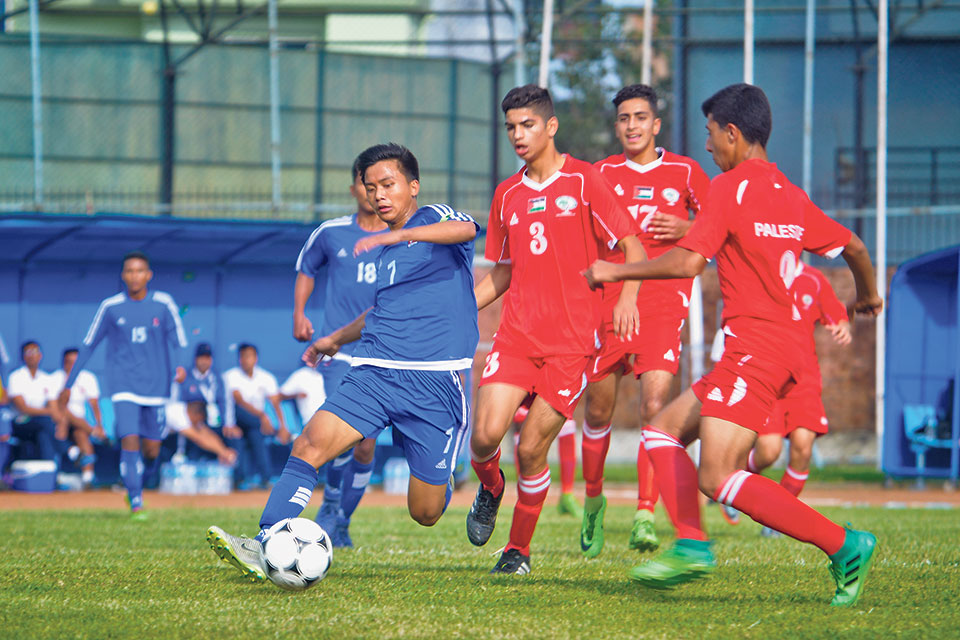 KATHMANDU, Sept 25: Nepal has wrapped up the AFC U-16 Championship 2018 Qualifiers with a disappointing 2-1 defeat to Palestine on Sunday.

After failing to save an early lead at Halchowk Stadium, Kathmandu, Nepal faced second defeat in Group D of the Qualifiers which ended its hope of qualifying as the best runner-up.

Brijesh Chaudhary scored Nepal’s only goal while Mahmoud Wridat struck a brace for Palestine.
Regardless of a goalless draw with India on the same day, Iraq has qualified to the Championship as the group winner with seven points from three matches. Iraq had overcome Nepal (1-0) and Palestine (4-0) in the earlier matches.

The second placed Indian team, which acquired five points from one win and two draws, has chance to secure its place in the Championship as the best runner-up. The Indian side had defeated Palestine 3-0 before playing 2-2 draw with Nepal on Friday.

India’s qualification fate, however, will only be decided on Sept 29 following the conclusion of Group H of the qualifiers in Yangon, Myanmar.

Alongside 10 group winners, five runner-ups will join host Malaysia in the Championship to be held in Malaysia next year.

A total of 45 Asian nations were divided into the 10 groups in the Qualification phase.
Since the top two teams were already confirmed from the earlier match between Iraq and India, host team Nepal started the match with a target of producing its first win of the Qualifiers.

Brijesh Chaudhary who had scored Nepal’s both goals in the 2-2 draw against India on Friday put the home team in the driving seat scoring the opener from the spot in the 10th minute. Nepal was given the penalty after striker Akash Budha Magar was fouled inside the box by Palestinian defender Muath Barhoush.

Palestinian side which had failed to score any goals in its first two losses, found its first goal of the Qualifiers in the 28th minute and made the score line 1-1.

Midfielder Mahmoud Wridat, after receiving the pass from midfield, beat Nepali goalie Bishal Sunar and scored in the empty net.

Palestine took the lead for the first time in the match with Wridat founding the net again in the 75th minute. Second half substitute Bashar Said disposed Nepali defender Ashim Gurung in the midfield and sprinted with the ball towards the box before squaring into Wrodat’s path. Physically strong Palestinian midfielder Wridat beat two Nepali defenders in the box and finished from close range.
With a win over Nepal, Palestine jumped to the third position in the table while the host team remained in the last place with one point.

Nepali head coach Sunil Kumar Shrestha said that it was the worst performance of the entire qualifiers. “It was a must-win match for us and we were confident of doing so. But our performance was below the par,” said Shrestha.

He also said that the morale of his players was the major reason behind the win. “We treated our players psychologically because we wanted to go home with a win. Or players reacted superbly despite early defeats to Iraq and Iraq,” said Jalayata.

Nepal goes down to UAE

Nepal goes down to Kyrgyzstan