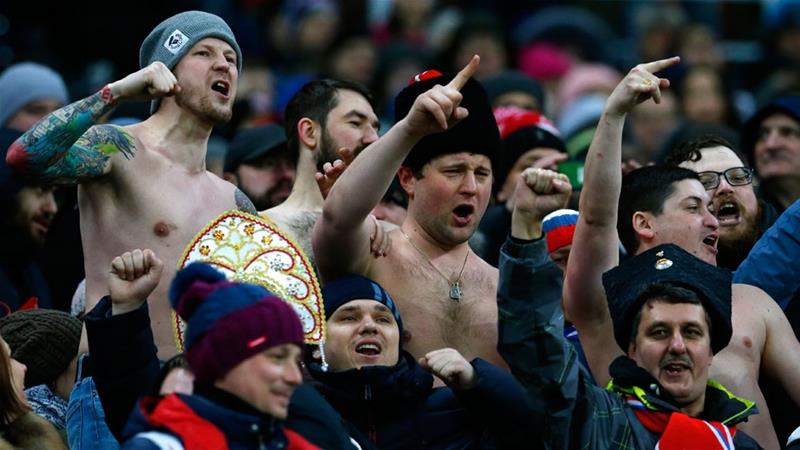 England football fan Di Cunningham was a little apprehensive about travelling to Russia for World Cup 2018.

There have been concerns among rights groups over the rise in homophobia and the safety of homosexual fans in the socially conservative European nation.

Homosexuality, which was classified as a mental illness in Russia until 1999, is a controversial issue in a nation which does not recognise same-sex marriages.

Russia decriminalised same-sex interactions in 1993, but hate crime against the LGBT community (lesbian, gay, bisexual and transgender) has been on the rise since the country passed a controversial law banning the spread of "gay propaganda" to minors in 2013.

Russia is ranked 45 out of 49 European countries in terms of gay rights by the ILGA-Europe, a network of European LGBT groups.

Cunningham, who will be attending England's first match against Tunisia on Monday in Volgograd, said her alliance of LGBT football fan groups has received threatening anonymous emails, warning that they would be "stabbed" if they made the trip to Russia.

"We have received several warnings that LGBT fans will not be welcome in Russia and some were quite drastic in terms of what would happen to us if we did go," said Cunningham, organiser of Three Lions Pride, an LGBT football fan group of England supporters, adding that it was "unfortunate" that FIFA is holding such a prestigious football tournament in a country where "some people are unwelcomed".

Pride in Football, the UK alliance for fan groups that belong to the LGBT community, has since lodged a complaint with FIFA - football's governing body - and were told that the threats are being investigated by the tournament organisers.

Despite the reassurances, Cunningham says a lot of LGBT fans are scared to attend the month-long sporting spectacle in Russia.

"There aren't many openly gay LGBT fans going because most people don't feel that their safety is guaranteed," Cunningham told Al Jazeera.

Fare network, the anti-discriminatory body that works in collaboration with FIFA, reported an increase in anti-gay and racist chanting in Russian football over the last year.

There were 12 incidents of homophobic behavior by fans inside the stadiums, according to the report by Fare network and the Moscow-based SOVA Centre, released last month.

The report noted that fans increasingly labelled opponents as "gay" as a means of abuse.

"These levels of discriminatory chanting indicate that xenophobic views remain deeply rooted among many Russian football fans," the report said.

Commenting on the findings, Pavel Klymenko, Eastern Europe development officer for Fare network in Moscow, said: "Given the evidence of, and the seriousness of these issues in Russian football, of course, some concerns remain for the visiting minorities especially, LGBT fans."

Troy Townsend, education manager at UK-based anti-discriminatory group Kick It Out, said he was "very concerned" about the homophobic trend in Russian football that was present ahead of the World Cup.

"It's just a continued spate of lines that have been coming out of Russia - those that we see or those that maybe we don't see - that would mean there has to be concern about what happens during the actual tournament," he said.

Up to 10,000 UK nationals are expected to travel to Russia for the World Cup, according to a Foreign Affairs Committee report.

UK-Russian relations have been fraught of late after the British government accused Moscow of allegedly poisoning former double agent Sergei Skripal and his daughter, Yulia. British MPs have warned that English fans face a number of risks at the tournament, including "attacks motivated by racism, homophobia or anti-British sentiment".

England's LGBT fans travelling to the tournament have been advised "not to publicly display their sexuality", under the travel guidelines issued by Football Supporters' Federation in collaboration with the Foreign and Commonwealth Office.

"The simple fact that a government does not incorporate laws and regulations that prohibit discrimination and at the same time protect the freedom of expression of people (or anti-LGBT propaganda associations), that question the LGBT cause and promote persecution, is a direct violation of civil rights," said Juan Pablo Morino, sport secretary at the Argentinian LGBT Federation.

Morino, while condemning "discriminatory and hateful practices" in football, added he was more concerned about the daily life of the residents of Russia -  "those who must live with this all year".

In an attempt to clamp down on discrimination and promote diversity, FIFA introduced a new anti-discrimination monitoring system for the 2018 World Cup qualifiers and the FIFA Confederations Cup.

Three anti-discrimination match observers will be present in the stands at all 64 World Cup games in Russia, monitoring the behaviour of spectators.

Referees on the pitch will have the authority to suspend and even abandon the match if discriminatory behaviour persists.

"We have a strong monitoring system in place," Federico Addiechi, FIFA's head of sustainability and diversity, said in a statement, earlier this month. Furthermore, everyone who is part of the match organisation, including staff, volunteers, teams, stewards and security personnel has been briefed and trained to ensure that, if discriminatory incidents occur, the right action is taken swiftly," he added.

Fare network is also independently launching three initiatives during the tournament this summer - a Diversity Guide, a Diversity House project and a WhatsApp emergency hotline - for the safety of visiting LGBT and ethnic minorities.

Rights groups and LGBT fans have welcomed the efforts by the tournament organisers, but some fear for their safety outside of the stadiums.

"We have a real sense that we will be safe in the stadium, even if we do have a rainbow insignia; that we will be free to show them in support of our teams in terms of promoting the LGBT community in football, but it's not clear how safe we will be as we conduct ourselves as fans in those host cities," said Cunningham.

FIFA's 2017 disciplinary code makes no mention of sexual discrimination, but players are suspended for at least five matches for offending "the dignity of a person or group of persons through contemptuous, discriminatory or denigratory words or actions concerning race, colour, language, religion or origin".

Article 67 of the code also imposes liability for improper spectator conduct, which usually pertains to fines or warnings for the national federation.

LGBT and anti-discriminatory groups have urged that more needs to be done and banning orders should be enforced to effectively eradicate homophobia from football.

"Ultimately we have got to hold footballing bodies, the nations and their federations accountable for the acts of their fans," said Kick It Out's Townsend.

Despite the concerns around homophobia and the challenges of holding a mega sporting event, Fare network is hopeful that the tournament runs smoothly without any incidents.