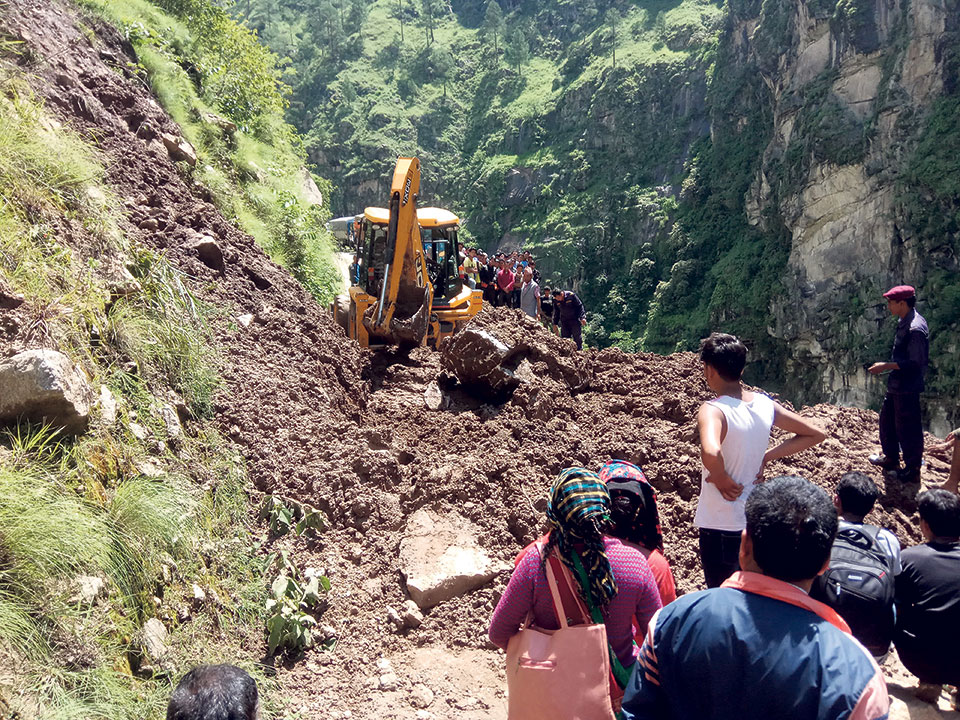 An excavator clears landslide debris along the Karnali Highway in this recent picture. Photo: DB Budha/Republica

JUMLA, Aug 17: Sher Bahadur Bohora of Jumla recently traveled to Surkhet last week. That was not the first time he made the trip. However, he was never scared as he was on that trip. ‘That was not a journey, it was a nightmare’.

“Karnali highway is not safe at all. The rural roads opened haphazardly connecting the highway have made it a hazardous road to ply,” he said. “While traveling through it this time, I felt that I might not reach home alive.”

Widening of the road networks is one of the most remarkable happenings that took place across the country in the last few years. This gained further momentum after the restructuring of the nation was complete and local bodies came into existence. Building road was the major concern of people before the elections, and it continues to draw their attention.

Reports say that local representatives compete with each other to take roads to their constituencies faster so that their political hold remains intact. And all this has taken a toll on the quality of roads.

“Landslides were falling, and it was just like a death trap. We were stranded there for hours, having nothing to eat and nowhere even to sit comfortably. If you look down the cliff, you only get nervous. Deadly journey!” Bohora narrated about the recent trip to Surkhet. “Earlier we would not see such frequent landslides,” he added.

Even little rain triggers landslides in the highway these days. Soils have become fragile due to the digging without considering the geological condition of the landmass.  Environmental aspect has been ignored by almost all local bodies while widening the road networks. According to Bohora, technicians and engineers are not consulted while planning and undertaking road projects by most local bodies.

“There is no such practice. It is the locals who decide everything; local representatives do what they like, they bring excavators, dozers. Many local representatives own such machines. And roads construction is treated as a casual thing to do rather than a technical work that needs experts,” he lamented.

Landslides have left several parts of Karnali highway dilapidated. Local bodies have mostly connected local roads with the highway where the highway is narrow. Because of the newly constructed sub-roads, the highway’s blacktopping has been damaged at most of the places.

“Now, the highway and the rural roads look almost the same at many places. Both are without blacktopping or gravel,” said Bohora. “Traveling through it is way riskier than before.”

He said he had been stranded along the Sherbada section of the highway for four hours during the journey. And throughout the time he thought about the roads and insensitive activities of the local bodies and their mute supporters. “If this goes on, we are only digging a hole for ourselves. Bad roads are death traps, what else?”

Provincial government plays a negligent role in constructing local roads. Stating that the federal government has not handed over the budget for local roads, it stays away from the matter. On the other hand, local bodies have both budget and rights to decide for a local development project. But sadly, most of the local authorities lack technical expertise. “And yet, they just move ahead in implementing such projects haphazardly,” Bohora stated. “The situation is worse in Karnali,” he added.

From Jumla to Surkhet, the 232 kilometers long road has witnessed woes of farmers no less. Apple farmers recently lamented that they are not able to deliver fresh apples to the market due to poor roads. Similarly, other fruits and vegetables do not reach their destination on time. These have affected the local economy.

“It is only ordinary people who travel by road here. If you have money, you go by air,” reported Bohora. “For commoners, everything is a hassle.”

The tourism sector is no less affected. Those who come to view the mesmerizing Rara Lake are left with painful memories due to the dilapidated roads. “There is no presence of the authority on the road. Even in case of emergencies, you have to leave everything to the god,” Bohora remarked.

KATHMANDU, June 13: "We used to spend four days inside a bus traveling from Jumla to Nepalgunj," said a group of... Read More...

JUMLA, Nov 4: Apples grown in Jumla have fetched Rs 100 per kg in the district headquarters itself. ... Read More...