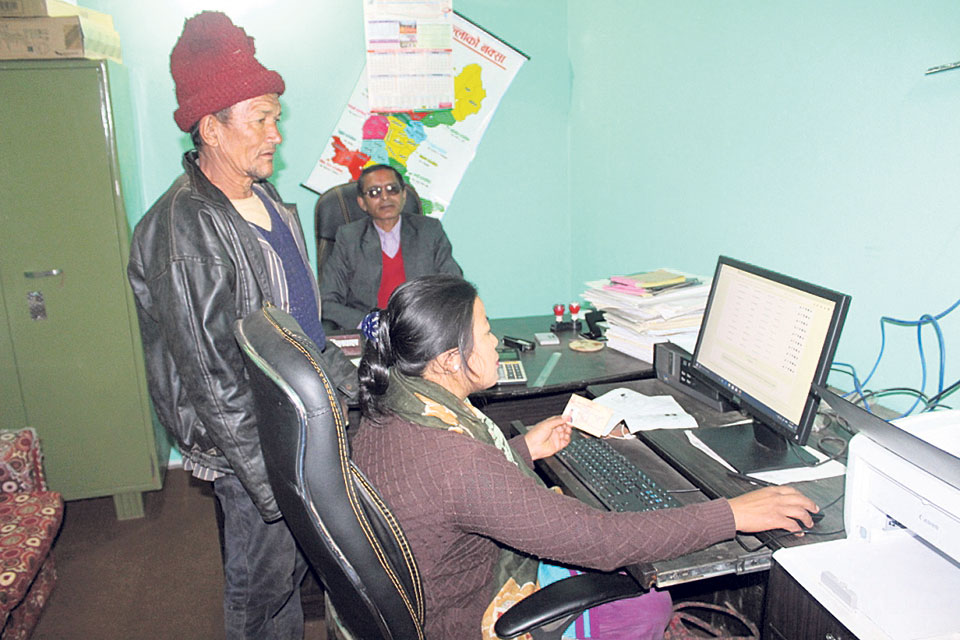 Officials at the Jwalamukhi Rural Municipality preparing a computerized birth certificate on Sunday.

DHADING, Jan 15: Karna Bahadur and Shreemaya Shrestha recently got their marriage registered. The locals of Jwalamukhi Rural Municipality had reached the rural municipality's office in the first hour on Sunday thinking that it might take hours to get the work done. To their great surprise, the couple was handed over the certificate within minutes.

“We had never anticipated that they could do such things within minutes and so swiftly in minutes. It's really surprising to us,” said Shreemaya. “Digitization is an amazing thing. They received our documents, filled the form on the computer and then gave us certificate instantly,” she added.

This experience has made the couple feel that the days of hassle for getting paper work done at the rural municipality office is just over now. No matter how many people reach the office with such work, they will get their work done just as quickly, it seems, Shreemaya stated.

The staffs of Jawalamukhi Rural Municipality agree. They informed that the office has been using computer to automate most of the work, nowadays. “We have gone digital. It's a huge change,” said the rural municipality's Chief Binod Raj Timilsina.

Along with the rural municipality offices, government has adopted using computer systems in other service areas. Health posts here have begun to keep the data of newborn on the computers. Timilsinna said that all official papers will be prepared using the computer system in the days ahead.

“As soon as the child is born we prepare his or her birth certificate in computer, get it printed and hand it over to parents right away,” informed Bharat Gurung, in-charge of the health post in the rural municipality.

The local body has plans to digitalize all the offices under it. It is presently working on acquiring required instruments and human resources to achieve its goal, Timilsinna noted.

“Now, there is no option of going digital. We have planned to register birth, death, marriage and all other important events that way. Apart from that, all office works will be done through computers in the days ahead,” Timilsinna stated.

“We promised a lot to the public during the local elections. One of the biggest promises was that we would give very smooth service to the people in all wards. And we are now working to materialize that promise,” he added.

Internet service in all seven wards has made it possible for the municipality to materialize the dream of going digital. This has already started simultaneously from all wards. However, there are few things yet to be addressed in order to digitalize all the works of the rural municipality, Timilsinna said.

“We have internet services in all the wards of our rural municipality. But we need few more basic tools and human resources in place to make the VDC fully digital,” he said. “In the days to come, pen and papers are going to be fully obsolete,” he added.

Badri Nath Lamsal, chief executive of the rural municipality locals have felt tangible changes in the working procedures of the local body. As soon as the new team assumed the office, service delivery has become way smoother than before, he said.

“There was a proper functioning local office for several years. Local level election was held after nearly two decades. People had huge expectation,” he said. “And we are very much committed to meet their expectations. Availing smooth services to people is the first step towards it,” he added.

Lamsal cited shortage of human resource in the wards and municipality office for not being able to provide best services. Rajendra Maski, an official at the rural municipality office expressed satisfaction over the new way of working. Earlier, when things were recorded in paper files, it used to be very lethargic, he said.

“Computer makes it so much easier. It is really a significant thing for us in village,” he remarked. Maski said that the office has already issued 758 birth certificates, 126 death certificates, 279 marriage certificates and 79 migration certificates since going digital.

No one can become PM by making noise: Dr Koirala
23 minutes ago