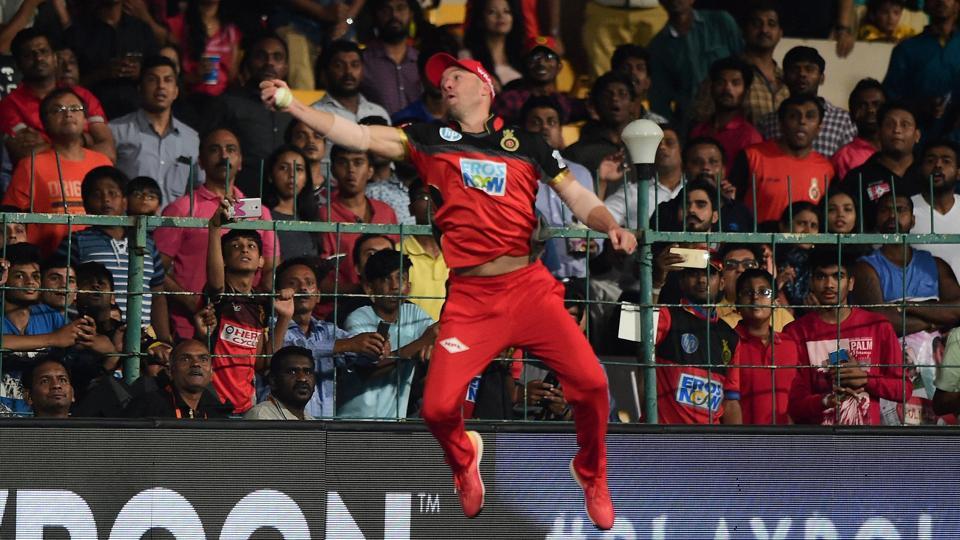 Sunrisers Hyderabad won the toss and opted to field against Royal Challengers Bangalore in an IPL 2018 match at the M Chinnaswamy Stadium on Thursday.

May 18: Royal Challengers Bangalore (RCB) clinched a humdinger of a match to keep themselves alive in the Indian Premier League (IPL 2018) with a 14-run win over Sunrisers Hyderabad (SRH) in their final home game at the M Chinnaswamy Stadium in Bengaluru on Thursday.

Needing 20 runs off the last over while chasing a monumental target of 219, SRH ended at 204/3, managing to score just five off the last six balls. SRH skipper Kane Williamson’s 81 and 135-run stand with Manish Pandey (62 not out) went in vain as the table-toppers slipped in the closing stages of the game.

Sunrisers opener Shikhar Dhawan was caught and bowled by Yuzvendra Chahal in the sixth over but Alex Hales played a useful innings of 37 but not before he was given two leases of life. He was finally dismissed when AB de Villiers took a one-handed ripper, jumping in the air at deep mid-wicket to send the England opener back.

Earlier, asked to bat, a 107-run partnership between AB de Villiers (69) and Moeen Ali (65) for the third wicket guided Royal Challengers Bangalore to a challenging total of 218/6. De Villiers and Ali hit half-centuries to lay the platform for a big total as RCB did not start well, losing both openers -- Parthiv Patel (1) and captain Virat Kohli (12) -- early on.

De Villiers turned on the show, taking risks but as the old saying goes, fortune favoured the brave. The South African turned on his ‘Mr.360’ avatar with the crowd going wild with their chants of ‘ABD’.

Playing in his 250th T20, De Villiers brought up his fifth half-century in this edition and 27th in IPL history off just 32 deliveries. He smashed 12 boundaries and one hard-to-believe six, going down on his knees to pull the ball over long leg.

Ali too got into the mix to score an even faster half-century, his first in IPL, off just 25 deliveries. The England all-rounder hit two boundaries in his 34-ball knock but as many as six maximums.

But the 57-ball partnership was broken by Rashid Khan (3/27), who cleaned up both the batsmen in the 15th over. The Afghan spinner was in top form as he had earlier clean bowled Kohli too.

Rashid not just stalled the RCB run flow with his 12 dot balls but also stunned everyone with a one-handed catch to dismiss Colin de Grandhomme (40) at the deep mid-wicket boundary in the final over.

Meanwhile, Bhuvneshwar Kumar’s replacement Basil Thampi had a day which he would like to forget, ending up with the most expensive figures in IPL 2018. In four overs, Thampi got smashed for 70 runs.