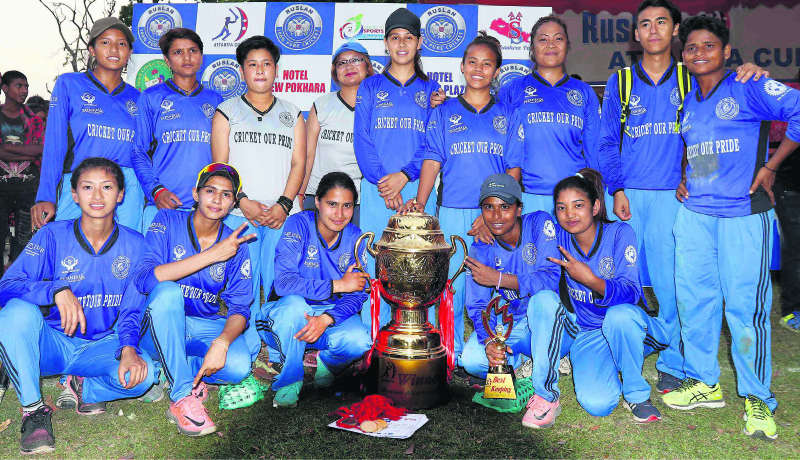 ATTARIYA, May 9: Rising Cricket Women has lifted the title of the Ruslan Attariya Cup Women's T20 Cricket Tournament defeating Armed Police Force (APF) by 16 runs in the final on Tuesday.

Sarita Magar, who came to bat at number three, contributed 21 runs, smashing two boundaries off 21 balls before getting caught in leg before wicket in Pooja Nimavat's delivery. Likewise, Karuna Bhandari made 24 runs with the help of five boundaries facing 20 balls. Meanwhile, APF's middle-order batswomen collapse cost dear for the team. Rising's Pooja, who was the pick of the bowlers, sent APF's other three batswomen to the pavilion including Binu Budha Magar (5), Ritu Kanaujia (8) and Mamata Chaudhary (5) to prevent the departmental side from reaching the target. Similarly, Shahnaz Prabin and Kriti Sen Thakuri claimed one wicket each.

Meanwhile, Rising's Pooja Nimavat was declared the woman-of-the-series for scoring 107 runs and taking 11 wickets throughout the tournament and received Rs 25,000. Similarly, Shampa Mukherjee of the same team was announced as the best wicketkeeper while APF's Jyoti Pandey and Sarita Magar were announced as best batswoman and bowler respectively. Each of them were awarded Rs 10,000.