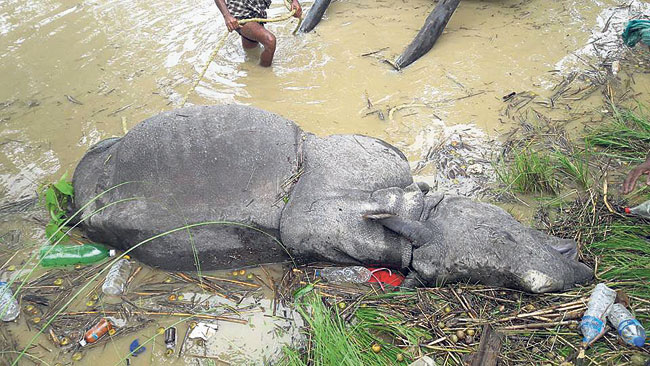 CHITWAN, March 9: An adult male rhino and a tiger have been found dead in the Chitwan National Park area recently.

According to the Park's information Officer, Lokendra Adhikari, the rhino, assumed to be aged around 30 years, was found dead at Kalkata Tapu near the bank of Narayan River.

Adhikari shared that the dead rhino could have succumbed to injuries from a clash with another rhino since its horn and the hooves were intact. "It rules out the possibility that the rhino was killed by poachers," added Adhikari.

With this, the rhino fatalities in the Park in the current fiscal year 2020/21 have reached 22. Of them, four of them were killed by poachers and rest perished due to various natural reasons. Preparation is afoot to conduct rhino census from March 22 this year.

Likewise, the CPN team also found a tiger in dead condition at Chaparchuli stream. The dead big cat, estimated to be 4-year-old, was spotted on March 7, shared Adhikari.

The sex of the dead tiger, however, could not be ascertained. It is the first tiger found dead in the Park this fiscal year.

Two rhinos including one calf found dead in CNP