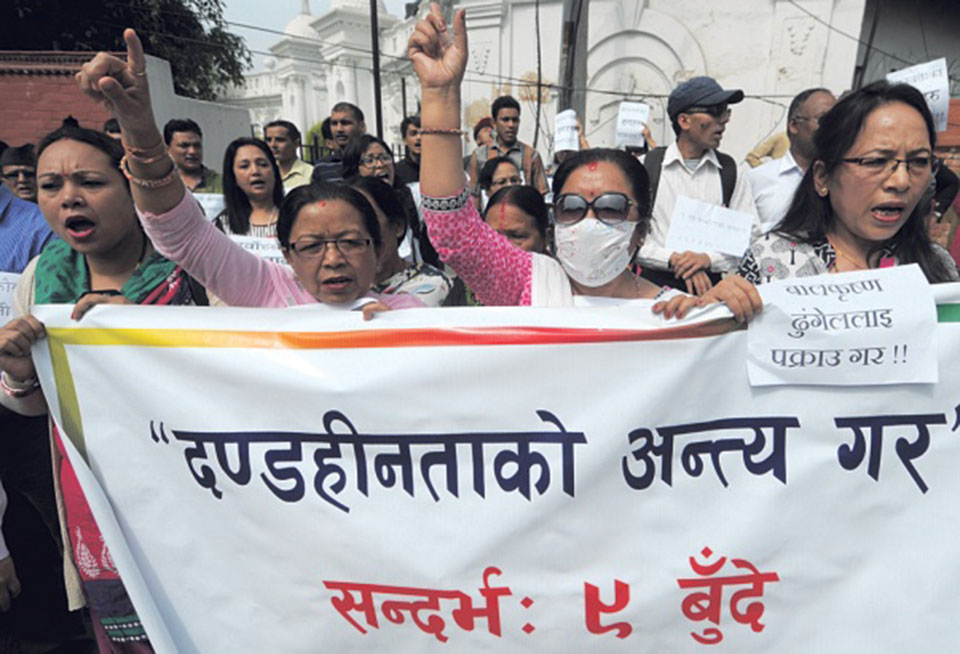 After over four years of official truth commissions, their legacy raises several concerns that demand a serious review. Previous mistakes need to be corrected immediately to avoid a further legitimacy crisis in transitional justice mechanisms. The government did not amend legal flaws in the current transitional justice act in line with Supreme Court verdict, thereby ignoring the calls of victim alliances and civil society. This is one major cause of lack of progress in transitional justice (TJ) process.

Officials of Truth and Reconciliation Commission (TRC) and Commissioners of the Commission of Investigation on Enforced Disappeared Persons (CIEDP) are retiring without completing their mandated tasks. This marks a historic loss in TJ process. We spent time and resources for four years at the cost of human suffering from a brutal war, doing virtually nothing.

Since the signing of Comprehensive Peace Agreement (CPA) in 2006, Nepal’s transitional justice debate has been largely controlled by security forces and political elites. A number of ordinances and parliamentary bills along with the existing act on TRC and CIEDP that were framed in the last 12 years have failed to address human rights violations in a fair, just and dignified manner.

First of all, TRC Act itself was flawed. It has a number of clauses that raised questions about its legitimacy not only among the domestic actors but also international community and United Nations. While this question of legitimacy is yet to be addressed, the government has started the process of new appointment in the TJ bodies that are yet to be reconstituted. Without legal amendment and adequate trust building measures with victims and civil society, the candidates who believe in victim’s dignity, legal values, moral ethics, human rights and humanitarian law may not be interested to join the reconstituted bodies, for national and international community will keep raising legitimacy question.

The government has sought to reappoint new commissioners based on a faulty act. This will hamper victim-centric transitional process to achieve truth, justice and reparation.

The government formed a committee led by former chief justice Om Prakash Mishra to appoint new commissioners. But this was done without adequate consultations with the victims, and without setting a proper work plan to make the TJ bodies better.

What now?
First, the government must start a wider consultation to review past mistakes, find a wise solution together with the victims, correct legal flaws respecting Supreme Court’s verdict and international legal obligations, conduct the reappointment process transparently, and mandate them with specific policies on punishment, amnesty, legal measures, reparative measures and special court provisions. After addressing these issues with all stakeholders, government should draft the law and adopt an effective implementation policy and plan of action to include all actors in the process.

But as is the case, the government does not seem to care much about these issues. It is repeating the past mistakes. The government is not clear about the questions of mandate, level of independence, competency, legitimacy and the role of new commissions. It seems to be going after a quick fix without a long-term solution. Such an approach is unlikely to address justice concerns and victims’ needs.

A section of the civil society members, who earlier advocated for justice for the victims, seem to be defending the state. This does not bode well for TJ process. On the other hand, civil society actors and lawyers who have been advocating for principled transitional justice approach and victims’ rights, look keen to file their candidacy for the commissions, while validity of transitional justice law is still under question.

In this situation, all actors must again speak out against war crimes and potential threats to justice and humanity. The National Human Rights Commission (NHRC) has crucial responsibility in taking a strong stance for victims’ rights and for ensuring humanitarian support to all victims. The NHRC must strongly stand for transitional justice norms, based on its principled commitment to truth, justice, reparation and non-repetition of conflict.

It bears restating that NHRC’s recommendation to the government on conflict related cases from Bhairabnath disappearances, Lamjung exhumations and Doramba killings and many other war crimes has not been implemented. Therefore, NHRC must speak out together with the wider victims’ alliance to stand for their rights and to ensure that the transitional justice process is meaningfully resolved. We need to stand against injustice, structural violence and institutional impunity and remain committed to defending the victims.

Civil society and international community should also remain engaged with TJ process. This will create greater pressure on the government to amend laws and form the powerful commissions to investigate past crimes and provide justice to war era victims. All actors should play a constructive role in driving a victim-centred approach to transitional justice and to contribute to supporting war victims to achieve a long-awaited truth, justice and reparative needs.

This is the time for a real shift and a review based on past mistakes and non-repetition. The government must address the victims’ call for justice through consultations, ensuring real participation, and guarantee fairness in the national transitional justice process, thereby building trust for future.

Reconstitution of TJ bodies and reappointment of commissioners alone won’t help much. Victims have already suffered due to failure of TJ bodies to provide them justice. They should not suffer any more.

The author, whose father was disappeared by the State in 2001, is a victim rights defender and advisor to Conflict Victims National Alliance

To forgive or not to forgive

Failure of the government to adhere to the Supreme Court verdict in relation to amnesty could further agonize the victims, setting... Read More...

KATHMANDU, Feb 3: A week before expiry of the extended tenures of the Truth and Reconciliation Commission (TRC) and the... Read More...