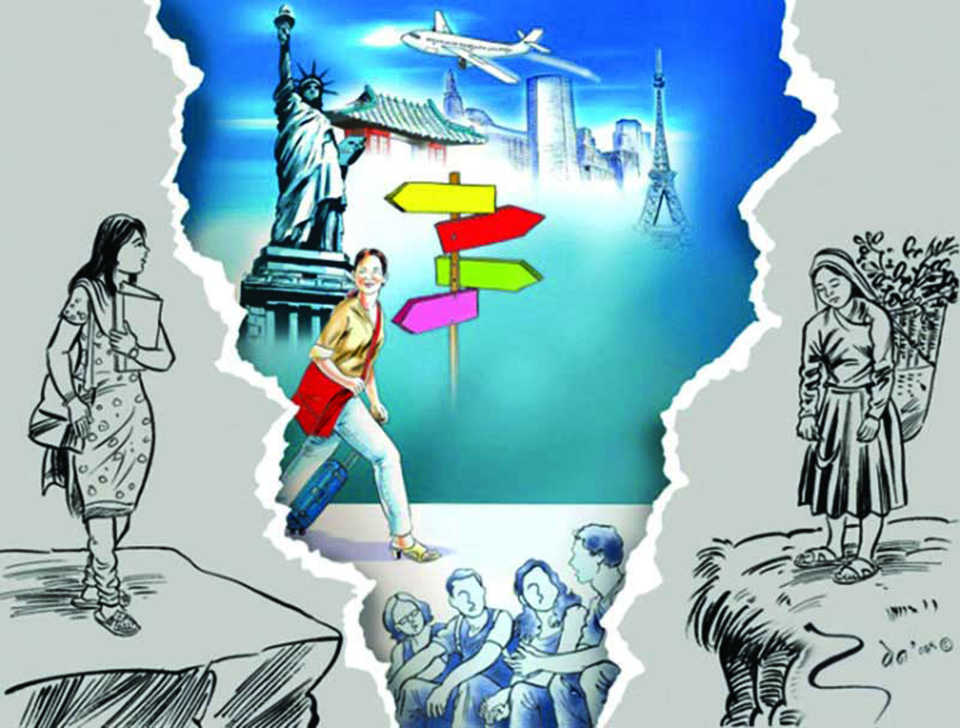 It is true that remittances have contributed a lot in socio-economic development of Nepal with around 56 percent of the Nepali households receiving money from outside. However, time has come to reassess the migration policy since the country is slowly undergoing the long-term adverse impact of mass exodus of Nepali youths to the foreign lands.

Increasing number of returning coffin boxes is just the tip of the problem. Its socio-economic and cultural impacts are even more alarming. Thousands of acres of agro-field are left barren while Nepal is importing agro products worth billions of rupees, leading to ballooning trade deficit. It is even more distressing when we recall the fact that Nepal was once not just self-sufficient in agro products but also used to export its surplus. Lack of adequate and proper nutrient has hindered our march toward achieving Sustainable Development Goals of eradicating hunger.

Our over dependence on remittances has also led to decline in entrepreneurship and encouraged excessive consumerism, which is in no way sustainable. Strong family bond is slowly disintegrating as at least one grown up youth from almost every family is out in the foreign land. The remaining family members, especially children, have to bear the brunt of this migration.

When foreign employment is an informed choice, the outcome is bound to be positive. But foreign employment, in our case, and for that matter in most of the developing countries, is more of a compulsion rather than choice. Prolonged political instability, armed conflict, excessively low economic growth and strong pulling factors of green pasture emanating from globalization and neoliberal policies of the governments have all contributed to the increasing number of Nepali migrant workers.

Once the remittances dry up, we might relapse to the same sorry state if we do not put some safety valves in place in time.

With the adoption of federal, democratic and inclusive constitution and formation of governments at all three levels, it is an opportune time for Nepal to think about utilizing our human resources for our own national development. Nepal is in the midst of accruing demographic dividend, but if we fail to utilize it now, we have to wait long to materialize our vision of ‘Prosperous Nepal and Happy Nepali.’

It is heartening to note that the government has taken some concrete steps in order to address some of the long overdue anomalies in foreign employment sector. One such step is its recent decision to make it mandatory to attest all the demand papers from the concerned missions of Nepal. It shows the commitment of the government to make foreign employment more reliable, secure and decent. But this is not enough.

The government needs to equip all the missions with the required wherewithal so as to make them capable enough to check the validity of these papers. Otherwise, it will make no difference whether missions are involved in the process or not. After all, our missions abroad were not established with the aim of dealing with the issues of foreign employment. With the passage of time, this function has been added to them as the process of globalization got more integrated triggering movement of laborers across the borders.

If the government’s intent to undertake so many mega projects is to be materialized then all aspiring Nepali migrant workers do not need to toil hard in the scorching heat in the desert of Gulf countries. They can earn money and livelihood living with their families in their own home land.  Thus time has come to invite more investment in the country itself in the sectors of comparative advantages like tourism and hydropower by creating conducive environment

It has been proved that remittance-led development is bound to be susceptible to the variables beyond the control of labor sending countries.

Can investments be efficient?

At a time when protectionism is on the rise, the risk of trade disruptions is only increasing ... Read More...

Rather than the victims, rapists should be persecuted, ostracized and humiliated. Survivors need support both from the state and the... Read More...