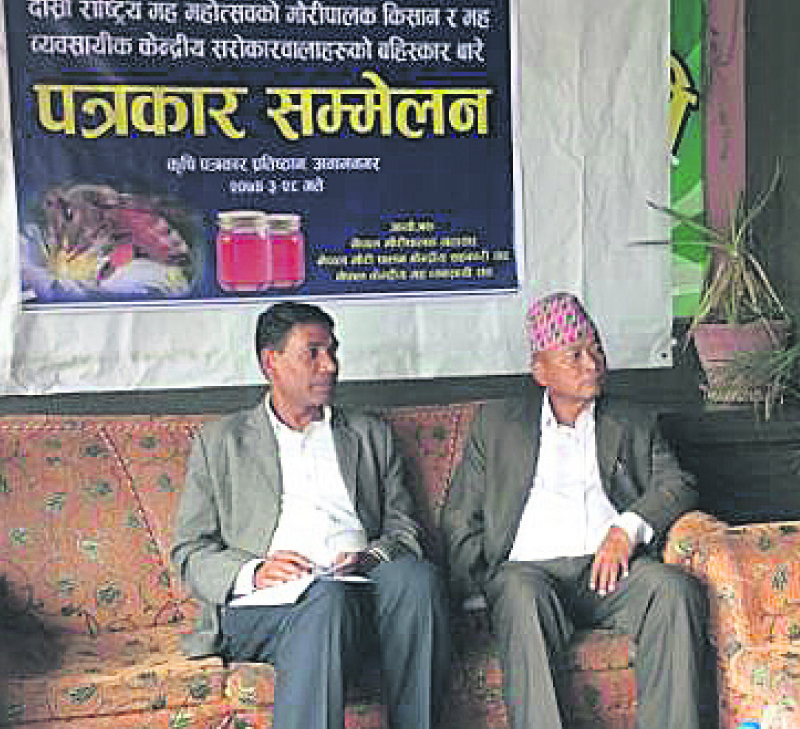 Rukum feels the heat of climate change but farmers are getting climate-resilient
For roughly 300 people from 48 households in Ghetma-1, Bankejiula of Rukum district, Bankejiula irrigation canal is a lifeline, a very thin lifeline.

Before a users’ committee built this canal, with support from development partners like the UK Aid, European Union, Republic of Cyprus and the UNDP, there was an earthen canal, a local said while interacting with the media. The seepage of water was considerable back then, meaning crops not needing much water would get it at the expense of crops that would need a constant supply of water (like paddy).

With a concrete canal in place now, the seepage has stopped, much to the relief of subsistent farmers in the locality. Kumhe Pun (68) of Bankejiula-1 said the canal remains operational round the year. Before construction of the concrete canal, potato farming and corn farming was less intensive, he said. Post-construction, farming is more intensive and farm yield has also gone up, said the patriarch of a seven-member family comprising himself, his wife, three daughters and their children.

Climate-resilient
An increase in farm yield should give hungry humanity a reason to celebrate, but in this case the associated cost seemed a bit high. As conversation progressed, Pun revealed that Jhyaledhan (an indigenous variety of paddy) had become extinct with farmers like him opting for improved paddy variety in the hope of increasing yield. A happy Pun said: “Earlier, in my paddy fields, I used to harvest five muri of Jhyale dhan. After switching to improved paddy, which does not demand as much water, the yield has increased to 10 muri.”

Unlike GMO seeds, Pun can use Nepal grown seeds and continue to re-use them after each harvest.

Ludre Khadka (59) said his family has also switched to improved paddy variety. The patriarch of a seven-member family comprising four sons, one daughter and (second) wife is satisfied with the paddy yield. He says indigenous paddy variety planted in his fields used to yield around four muri, whereas improved variety (312 Shankar) produces six muri. Isn’t that a huge relief for a community that’s been coping with drought conditions? What’s more, 312 Shankar rice is tasty too, he says.

Clearly, this man from a community susceptible to food insecurity arising from drought conditions was happy to find Nepal’s indigenous paddy varieties in a purer and improved form.

Vijaya Singh, Assistant Country Director of UNDP Nepal, said indigenous seed varieties that farmers had been cultivating for long time were not suitable to increasing drought conditions because of climate change and needed replacement with Unnat Jaatko drought-resistant varieties. NCCSP has distributed Unnat Jaatko seeds like Sukkha 4 variety of paddy and other drought-resistant varieties of seeds based on the recommendations of National Agriculture Research Council and performance of these varieties were found satisfactory in comparison to indigenous varieties.

No winter rainfall
In normal times, light rainfall during the winter prevents winter crops like wheat from wilting. But this winter, there was no rainfall and many locals still do not know the cause behind it. Khadka laments that the government does not give them food aid, though they are food insecure. He says lawmakers do not care.

Ghattas (traditional water mills) have ceased to exist in many other parts of Nepal, but not in Rukum. Khadka says he also owns and runs a water mill that brings him a monthly income of around Rs 4,000. And he augments his income by fishing in the Thuli Bheri, a tributary of the Bheri River. Sahar, Dhumke, Thuli Bheri is teeming with Chuche, Barule, Asla, Rim (looks like snake, so he says), Bam, Budhna, Bandelo, Lhapo and Kursi, among other varieties of fishes, according to Khadka. That makes Thuli Bheri a fisherman’s paradise, even if he is juggling between running a water mill, tending to the fields and doing other domestic chores. Much to his relief, Khadka does not have to fight for irrigating his fields because they are close to the source of water that feeds the canal.
Water woes
Meena Khakda (53) is wife of Ludre Khadka. With her first husband, she has one son and three daughters. She has cordial relations with them: She says they even came to meet her some time back. With Ludre, she has none.

A look into her kitchen was insightful: She had an improved cooking stove fitted there.

Unlike a traditional stove, this stove emits less and the smoke empties out of the chimney, helping protect her and other family members from respiratory diseases.

However, cooking is not the only chore that rural women like Meena of Bankejiula have to perform. Fetching water is one of the other major chores, which is easier said than done in a water-deficit community.

Sunita Chanara, a local, says water sources have dried up. And the measly amount of water that they get from a source—there’s no piped water supply in the village—is dirty. People with fields in the lowlands hardly get any water for irrigation, she says.

Water woes have not spared Yamuna BK (32) of Bankejiula-8, either. Her husband Prem Prakash BK, a contractor, lives in Leh and Ladakh for almost six months every year, meaning the onus is mainly on her to ensure there’s enough water to meet requirements of a household that has at least three members—she and her two sons aged 15 and 12 years. She laments that no politician has bothered to alleviate their water woes, though they have promised many things.

Unlike crops, it may not be possible to develop human beings that can survive without water, not at least in the foreseeable future. This means people around the world, including those from Ghetma, have no option but to adapt themselves to the changing climate and its effects, with a little help from friends like the government and other development partners.

A school with just four students

RUKUM, May 7: With the objective of protecting Yarsa, a valuable herb with aphrodisiac function, from extinction, the Yarsa   Management... Read More...

RUKUM, Jan 31: A person died of a stomach cancer in Rukum on Sunday night after failed attempts to draw... Read More...