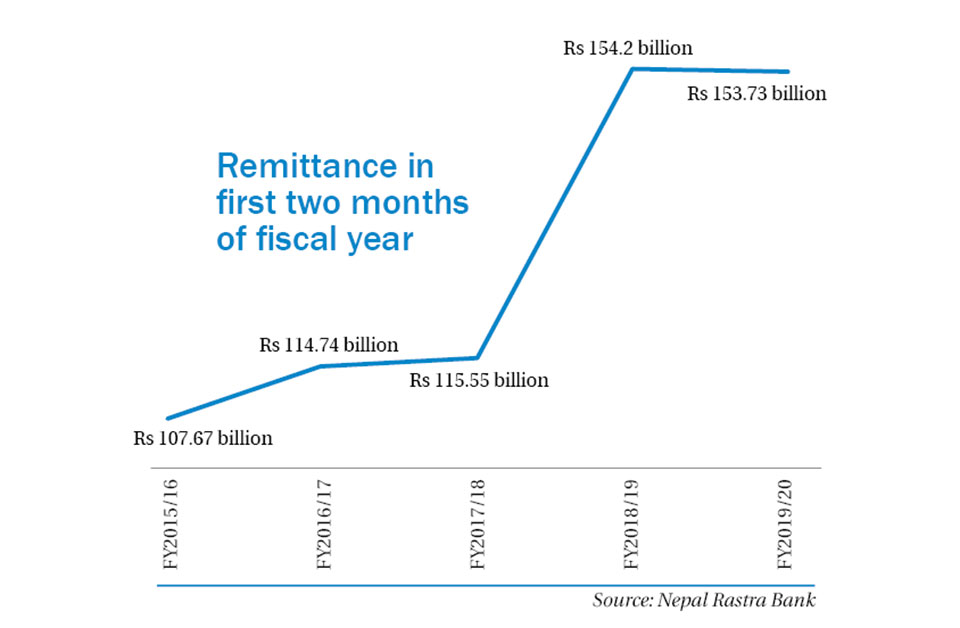 KATHMANDU, Oct 24: Breaking from a trend of continuous growth in the remittance inflow, the money transfer of Nepali workers from abroad has observed a decline in the first two months of the current Fiscal Year 2019/20.

According to the ‘Current Macroeconomic and Financial Situation of Nepal (Based on Two Months’ Data of 2019/20’) released by Nepal Rastra Bank (NRB) on Wednesday, the remittance inflow fell 0.3% in Nepali rupee term to Rs 153.73 billion in the first two months (between mid-July and mid-September) in the current fiscal year compared to the corresponding period of the last fiscal year – FY2018/19.

According to the NRB, Nepal had received a total of Rs 154.2 billion in remittances in the first two months of the last fiscal year.

In US dollar terms, the remittance inflow has fallen by 1.3% to $1.36 million in the first two months of the current fiscal year.

While some experts say that a small decline of workers’ transfer should not be a reason for worry as it is the figure of only two months, there are others who find the negative growth of remittances a matter of concern.

The fall in remittances has occurred a little before the festival season, when people abroad usually send money back home.

Also, the negative growth of remittances has occurred although the exchange rate of most of the foreign currencies, including the US dollar, has remained at a higher side. Higher exchange rate not only tempts workers abroad to repatriate their earnings, it also increases the amount of remittance in domestic currency term.

Remittance companies’ executives attribute the fall in the number of workers abroad for the decline in remittance inflow.

“Malaysia remained closed for employment of Nepali workers for almost one and a half years now. Its impact is now being reflected in the flow of remittance,” Chandra Tandon, vice president of Nepal Remitters Association (NRA), told Republica.

According to Tandon, remittance inflow should have gone up during this period for celebration of Dashain and Tihar festivals.

“Not only Malaysia, some other Mid East countries that are major destinations for Nepali workers are also cutting off their projects and vacancies. So, there is less demand of workers and even those workers who were working there are returning home,” added Tandon, who is also the managing director of City Express Money Transfer Pvt Ltd.

He also projected slackness in remittance inflow in the coming months.

“The remittance inflow is likely to fall this year. We are not much optimistic about the growth of remittances,” added Tandon.

Nepal is significant market for us