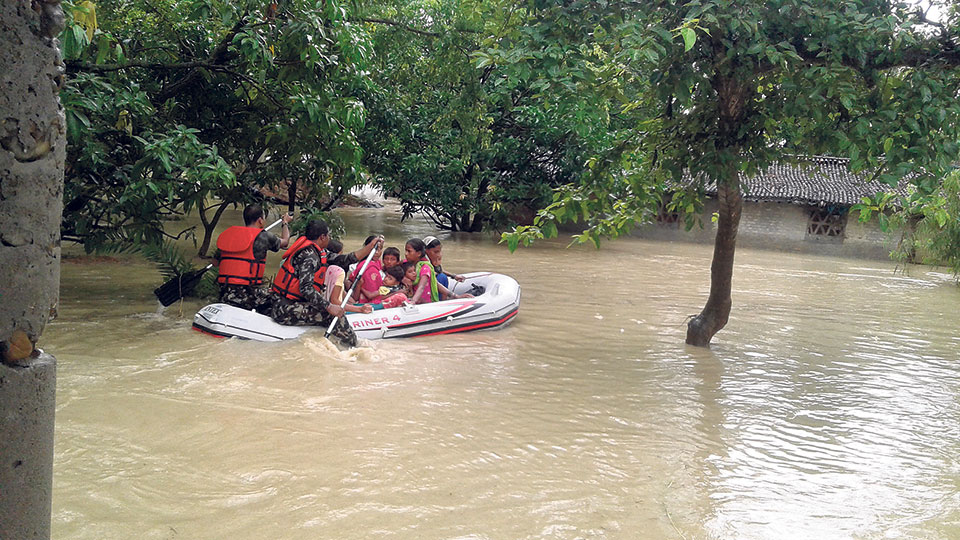 Security personnel use inflatable dinghy to rescue women and children from their flooded homes in a village in Sarlahi district on Sunday. The District Police Office, Sarlahi said many security personnel deployed in rescue operations in the flood-hit south-eastern part of the district are out of contact as their communication sets and cell phone batteries have died and there is no way to charge them as much of the district is without electricity since the past four days. Photo: Tanka Chhetri/Republica

KATHMANDU, July 15: The government’s efforts for the immediate rescue of flood and landslide victims across the country and relief for the affected has failed to impress them.

By Sunday evening, the death toll reached 63, according to Nepal Police.

The fear of disease outbreak has also been bothering the affected families. While 70,000 families have been reportedly rendered homeless due to floods in Rautahat district, hundreds of others have been displaced in Sarlahi, Bara, Parsa, Makawanpur, Solukhumbu, Itahari, Sindhuli and Udayapur districts.

According to police, 324 families have been displaced in Sunsari. Settlements in Barju Rural Municipality of Sunsari have been the worst affected in the district.

“Water has inundated around 25,000 houses while 324 houses have been fully damaged,” said DSP Pratit Singh Rathore.

“We have yet to collect the exact details, but there are reports of massive damage. Due to the lack of resources in the waterlogged areas, we have not been able to provide quick relief to the victims,” he said, adding, “It will be easier for relief and rescue now as the rains seem to have receded.”

In Sarlahi, the rescue and relief teams of Nepal Army, Nepal Police and Armed Police Force themselves are facing trouble. According to DSP Rathore, some teams are out of contact.

“The roads are damaged and there is no communication. The affected areas also lack electricity,” he added. “Some of the teams are out of contact.”

The situation is equally worse in Dolpa due to floods and landslides. Though a rescue team of 55 had reached the district on Saturday to search for nine missing people, only one body has been recovered so far.

“They searched for the whole night on Saturday and Sunday as well, but couldn’t find the missing ones. The body of a woman has been found,” said Police Chief of Dolpa Mukesh Kumar Keshari.

“The rescue operation is underway,” he said. Telecommunication towers, electricity poles and roads are badly damaged in Dolpa.

The flood victims in Dolpa have accused the government of not doing enough for rescue and relief. According to a local of Dolpa, Bhanu Bhakta Bohora, the government has taken a snail’s pace approach to tackle the crisis. Bohora, who lost his home to a flood, says that the lack of disaster preparation results in this kind of situation every year.

“Even when they know that floods and landslides occur every year, they are not ready with emergency packages,” he said. “Unlike earlier, we have three tiers of government - federal, provincial and local - now. But they lack coordination for quick rescue and relief of people hit by calamities,” he added.

Bohora said that he is not impressed with the announcement of the government to provide Rs 200,000 to Rs 300,000 to the victim families.

“I would find them sincere toward the people only if they reach out to the victims on time and give them relief. Just announcing certain amount, which they provide later, is not helpful in the current situation,” he remarked.

KATHMANDU, July 3: The Nepali Congress has urged the government to forward effective rescue and relief of the landslide victims... Read More...

Hotel industry should be made an industry of national priority thru law: HAN President Rana
21 minutes ago