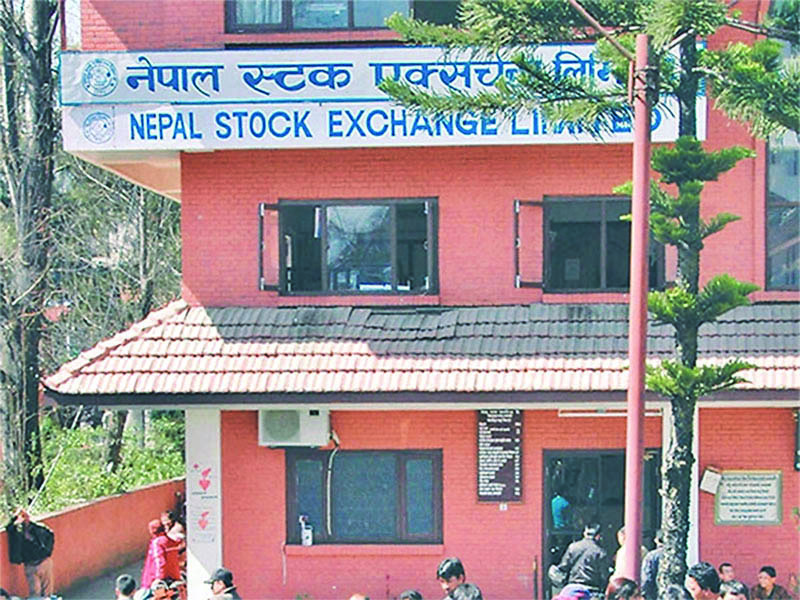 Capital market is an integral part of a country’s economy and financial system. It is the major source of long-term finance needed for operating corporate bodies in sustainable way.

Such funds are raised through issuance of securities (shares, debentures, bonds, mutual funds, etc) in the primary and secondary market. In Nepal, the erstwhile Nepal Industrial Development Corporation (NIDC) established in 1959 fulfilled the financial needs for such entities in the form of credit to some extent.

However, the concept of securities market for managing funds was virtually non-existent. As such the process of industrialization could not gain momentum for decades. In this backdrop, the establishment of Securities Marketing Centre (SMC) in July, 1976 marked the formal beginning of securities trading in Nepal. After the promulgation of Securities Exchange Act (1983), it was renamed as Securities Exchange Centre (SEC) in 1984. Till then the stock market was underdeveloped as very few companies floated public shares and the presence of investors was negligible due to lack of proper literacy.

The securities market went through the process of modernization with the SEC’s conversion into Nepal Stock Exchange (NEPSE) in May 1993 followed by the introduction of NEPSE Index as a major tool of measuring the strength of market. The NEPSE also acted as a regulator in parallel to a market operator creating conflict of interest. The first amendment in the Securities Exchange Act paved the way to create the Securities Board (SEBO) as an independent regulating authority on June 7, 1997 with a clear mandate to regulate and develop the capital market.

The SEBO was renamed as Securities Board of Nepal (SEBON) after the promulgation of Securities Related Act (2007) which played an instrumental role in creating necessary infrastructure for developing the capital market. However, the pace of market was very slow due to little attention by the government and absence of adequate legal framework. Besides, lack of mutual understanding between the SEBON and NEPSE created a situation of ‘cold war’ due to ‘hangovers’ of their own. NEPSE’s role to act as frontline regulator of stock brokers, list companies and other intermediaries is mandatorily continued till now.

Structural Reforms
Amidst legal hurdles and other challenges, Nepal’s capital market, both in primary and secondary fronts, have expanded, diversified and modernized remarkably after the SEBON embarked on several structural reforms at massive scale in recent years. It has witnessed the presence of more than 400 participants rendering varied services under SEBON’s regulatory ambit.

The SEBON has also envisioned issuing license for another stock exchange to spark healthy competition in the secondary market. Two commodity exchange markets are in the process of establishment following the promulgation of Commodities Market Act (2017). The recruitment of fresh human resources of various categories in different phases has enhanced SEBON’s regulatory capacity substantially to deal with the increase in number of market intermediaries. Earlier, it operated with ridiculously limited number of employees.

The introduction of central depository services supplemented by ASBA/C-ASBA services has simplified, expedited and secured securities transactions remarkably in the front of automation in trading, clearing and settlement. The provision of viewing market depth through NEPSE’s website and dissemination of information on real time basis has facilitated the investors. Most importantly, the implementation of long-awaited platform called ‘NOTS’ (NEPSE Online Trading System) has provided direct access to investment activities for the investors by eliminating cumbersome formalities in the course of securities trading.

New provisions on margin lending and institutional advisory services have helped to diversify the services of stock broker and merchant banker respectively apart from strengthening their capital base. Additional provision of carrying out stock brokerage services through commercial banks is expected to expand the securities market in all provinces. Brokerage and OTC charges have been slashed to boost the market. Similarly, the OTC market which since long remained dormant had been activated and the issuance of FPO and right share systematized.

The entry of more real sector companies in the securities market is expected to minimize the dominance of financial sector prevailing since the 1980s. Legal provision for setting up specialized investment funds (private equity fund, venture fund and hedge fund), floating local bonds by international organizations and promoting bond market are also geared toward promoting the market. Review in categorization of listed companies as the mechanism of circuit breaker system is also a remarkable reform.

The SEBON’s bilateral agreement with the central bank has paved the way to exchange information related to fraudulent, unhealthy practices (like insider trading, money laundering  and banking frauds) which are major factors affecting the securities market. Besides, the beginning of publishing its annual Policy and Program since 2017/18, though belated, is a remarkable move toward making its operations and activities transparent. It serves as a guideline for driving the SEBON’s developmental as well as regular activities in parallel to central bank’s monetary policy.

Besides, it has come out with other useful reading materials and commemorative publications for investors. Similarly, its affiliation with international regulatory organizations like the IOSCO and OECD has helped to upgrade and harmonize regulatory frameworks compatible with globally recognized best practices and standards. In this context, the successful hosting of international conference and roundtable in Nepal by SEBON in coordination with OECD in July last year provided opportunity to share mutual experience on financial consumer protection and education among the Asia and the Pacific countries.

A sound foundation backed by strong infrastructure necessary for modernizing the capital market is in place now despite several constraints. It can be attributed to SEBON’s success in maintaining proper coordination and understanding with other stakeholders like the government, central bank and NEPSE. However, there are several issues that have still remained outstanding.

Breaking the dominance of financial sector in the market through the entrance of more real sector companies and encouraging more private limited companies to encourage conversion into public limited companies is yet to gain momentum. Despite the passage of more than four decades, the number of investors engaged in securities market, though in increasing trend, is limited to about 1.6 million having predominance of small investors with literacy rate of about 18 percent.

Long-awaited frameworks on market makers and stock dealers are yet to be set up to stabilize the secondary market in the event of erratic fluctuation. Provision of institutional investors like Employees Provident Fund, Citizen Investment Trust and Social Security Fund apart from creating conducive environment for Non-resident Nepalis (NRNs) to participate in Nepal’s securities market should be top agenda of the SEBON. Besides, the privatization of NEPSE is important to enhance its competitive professionalism in the changed market scenario. Similarly, efforts toward cross-border trading of securities should be initiated.

The SEBON has celebrated its Silver Jubilee and its responsibilities are ever increasing. But it is still housed in a rented building. Ironically, the construction of its own office building despite laying foundation at Jawalakhel a decade ago, failed to materialize. It indicates the helplessness of SEBON and laxity on the part of the government.

In the changing financial environment, the SEBON’s capacity in terms of regulation, supervision and grievance handling needs to be upgraded to boost the confidence of the investors. It is possible only if it is backed by a strong legal framework ensuring adequate autonomy. Currently, the SEBON’s autonomy is narrowed due to very limited authority provided by the Securities Related Act (2007) which is an umbrella legislation of capital market. In fact, this part is ignored since long whereas the autonomy of NRB, the regulator of banking sector, has always been emphasized by international organizations like IMF and World Bank time and again.

The existing legislation does not even permit SEBON’s chairman to attend international meetings without the consent of Finance Ministry. Although all SEBON board members, including the chairman, are appointed by the government, it cannot frame regulations and recruit necessary human resources independently.

Obviously, the SEBON needs to be equipped with adequate operational autonomy in the backdrop of emerging challenges. At the first place, it should be governed under a special Act (charter) with restructuring in its Board of Directors which, from its very beginning is also represented by ICAN and FNCCI.

The ICAN is an umbrella organization of Chartered Accountants who are engaged in carrying out accounting and auditing of financial intermediaries including listed companies, stock brokers and merchant bankers licensed by the SEBON. Similarly, most of the FNCCI officials are stakeholders of these companies holding key positions. Such a structure of the Board creates conflict of interest in the regulator’s operation and activities. Hence it needs to be reviewed to eliminate the possibility of undue influence in the course of decision making.

The appointment of SEBON’s chairperson, who also concurrently serves as its Chief Executive looking after the day-to-day affairs, should be based on professional competency and regulatory capacity. It would leave a damaging impact on the capital market in particular and the financial sector in general if the selection of its leadership, including the chairman, is based merely on political affiliations, as is commonly observed in appointment in other sectors.

Satisfying the expectations of large number of irritant investors having little knowledge about the trend of securities market as well as managing occasional outcries and pressures from various sections particularly when the securities market faces downward trend, is indeed challenging. Hence, programs related to financial literacy carried out by SEBON for existing and debutant investors should be continued. The establishment of an apex academy should be expedited to fulfill the gap of adequate competent human resources, financial literacy and technology.

More emphasis should be given to promote ethical practices among the players to make them accountable to shareholders through effective monitoring of the status of corporate governance of listed companies as well as the code of conduct of SEBON board members and employees to make the market sustainable and internationally credible.

Closer coordination and collaboration with other stakeholders like the government, NRB, Insurance Board and NEPSE, among others, is of paramount importance as they together are responsible for promoting, diversifying and modernizing the capital market.

The author is former Executive Director of Nepal Rastra Bank

Nepal is a country on the move. Politically, despite having only just emerged from decades of turmoil, Nepal’s democracy is... Read More...