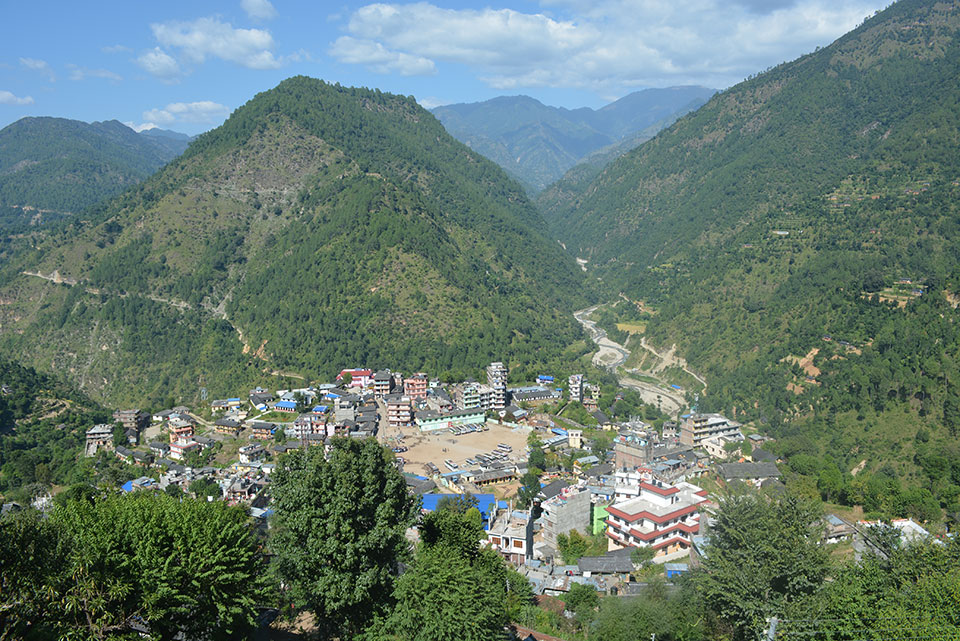 ROLPA, Aug 19: When he was posted to Rolpa 22 months ago, a dejected senior agriculture officer, Lal Kumar Shrestha contemplated like quitting his job. Rolpa was the last place he wanted to move to. He had always heard that even basic facilities are not available there. He decided to retain and with a very heavy heart, he finally moved there. After reaching there, he was surprised. His twenty-two months there passed ‘in the blink of an eye!’

“Hearing about my posting in Rolpa gave me a jerk. I was very much upset, and even thought of quitting the job,” narrated Shrestha. “But after living for nearly two years here, I can confidently say that Rolpa is totally different than what people generally think about it,” he added.

Speaking at farewell program organized for him and other officers, Shrestha thanked Rolpa and its locals. He termed the people in Rolpa as ‘extremely humble and honest’. “Having the opportunity to work with nice people like was a huge opportunity for me,” he said.

According to Shrestha, Rolpa is a very comfortable place for officers like him to work. Unlike generally perceived, there is no lack of facilities anymore, he asserted.

“Both at the personal and the institutional level, Rolpa is a great place to deliver. No officer, staff should hesitate to come here,” he stressed.

Shrestha has experience of working in around half of districts across the nation. Among those, he terms Rolpa the finest place. “Be it about people, about roads and other facilities, about weather and environment, Rolpa stands out,” he praised.  However, it is not just Shrestha, who has been so impressed by this small town. DSP Gyanendra Prasad Phuyal, who was also recently transferred here, shared the opinion.

“Just like Shrestha, even I was not very confident about having a good stay here before coming to this place. But being a policeman I had no choice, we are bound to reach to any corner of the country as and when our institution orders for it,” shared DSP Phuyal. “But come and stay here and your image about Rolpa will change forever,” he added.

According to Phuyal, Rolpa people’s honesty and simplicity is unmatched. This makes it so easy to work, ‘basically for police’. “And it is not just about people, even the lifestyle here is quite impressive,” he stated.

Rolpa is considered as the cradle of the Maoist insurgency. The decade-long war had started from here. It was not a developed place when the war was launched. The war further affected it.

“A grim picture comes to mind when people talk of Rolpa. A land devoid of roads, schools, hospitals, markets, etc,” said Phuyal. “ But the reality is different.”

Rolpa is no more a ‘remote zone’, thanks to ample of road connections. Similarly, power and communication facilities are not a far-fetched dream anymore. There are markets in Libang, Sulichuar, Ghartigaun. Schools and colleges are there for students. Hospitals and clinics are opening up.  Despite such changes in Ropla, civil servants still hesitate to come to Rolpa. So, most of the government offices are understaffed here.  According to Shrestha right advertisement of Rolpa will bring change in this scenario.  “People’s image about Rolpa should change and that will not change unless it is advertised correctly,” he said. “Rolpa is one of the most beautiful places in the country and now it is well equipped to develop by leaps and bounds due to new roads and other facilities. Government and non government sectors must realize it,” he added.

According to Shrestha, those who come to Rolpa once cannot go back easily. “You will fall in love with Rolpa. You can live a classy life here and if you are a civil servant, can serve people in a very fulfilling manner. This place gives you a satisfying experience,” he said.

Chief Administration Officer at the Thabang Rural Municipality, Suryalal BK agrees that ‘the old image’ of Rolpa is the reason behind civil servants unwillingness to come to Rolpa. He also stressed on the need of letting the world know of the ‘new Rolpa’.

“Our biggest disadvantage was the lack of road. This isolated us from the rest of the world. Now, we have roads, some of which are even blacktopped. And we have a lot more facilities available for those who want it,” BK narrated. “But few people know that Rolpa is thriving. They still carry the same old image of Rolpa in their mind and think low of us, this idea needs to change,” he added.

According to BK, even though Rolpa stood ten years of conflict, people later showed no trace of aggression or disturbance. Instead, they learnt to live in harmony, with love and understanding.

“Even for researchers, it could give a nice opportunity. It was the battlefield for long. Now, people are no more filled with desire to avenge. The war instead taught them to be more loving and harmonious,” he noted.

There are 72 wards in total in 10 local bodies of Rolpa. Almost all the wards are interconnected through roads.

Woman arrested with 5 kg of hashish

ROLPA, Dec 23: Bar Maya Pun, 55, was arrested with five kilograms of hashish during a vehicle check at Thawang... Read More...

121 students to miss SEE in Rolpa

A large number of children still deprived of education in Rolpa