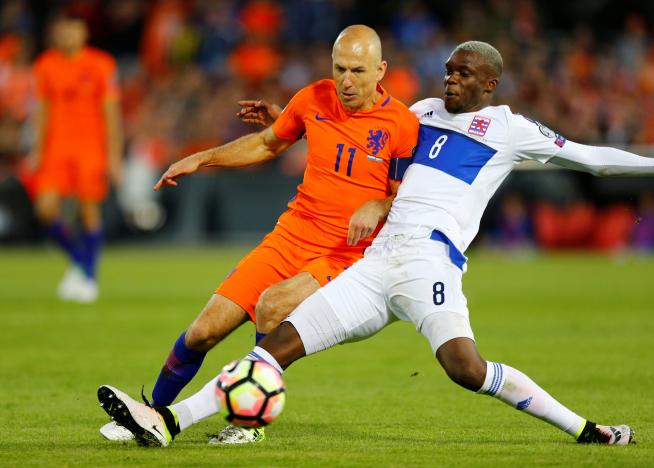 ROTTERDAM, June 10: Wesley Sneijder marked his birthday and a record 131st appearance for the Netherlands with a goal as the Dutch beat Luxembourg 5-0 in a World Cup qualifier on Friday to stay in contention for a trip to Russia next year.

Captain Arjen Robben, Georginio Wijnaldum, Quincy Promes and Vincent Janssen added the other goals but it was the 33-year-old Sneijder, breaking Edwin van der Sar’s record number of caps, who was the star in Dick Advocaat’s first game back as coach.

The win left the Dutch in third place in Group A, three points behind co-leaders Sweden and France.

Robben opened the scoring in the 21st minute after Wesley Hoedt had won possession and played a precise through ball for his captain to run on to.

Sneijder netted the second 13 minutes later, repaying Advocaat’s faith in starting him, after being set up by Memphis Depay.

Joel Veltman broke down the right to set up the third goal as Janssen missed out with a sliding effort but Wijnaldum was following up to finish.

Promes scored the fourth in the 70th minute, arriving unmarked at the back post to head home Stefan de Vrij’s cross.

With six minutes left Janssen was brought down by Luxembourg goalkeeper Ralph Schon and got up to hammer home the resultant spot-kick.

The Dutch next meet France away in Paris on Aug. 31 in their bid to fight back from a poor start to the qualifiers.

Their 2-0 loss in Bulgaria in March led to coach Danny Blind being fired before Advocaat returned for a third spell as national team coach.

June 26: The sprightly great-grandmother ushered in her 102nd year with an indoor skydive. ... Read More...

Costa returns to Chelsea side, scores on 100th appearance

LONDON, Jan 23: Still to clear up the ambiguity over last weekend's absence from the Chelsea team, Diego Costa did his talking... Read More...