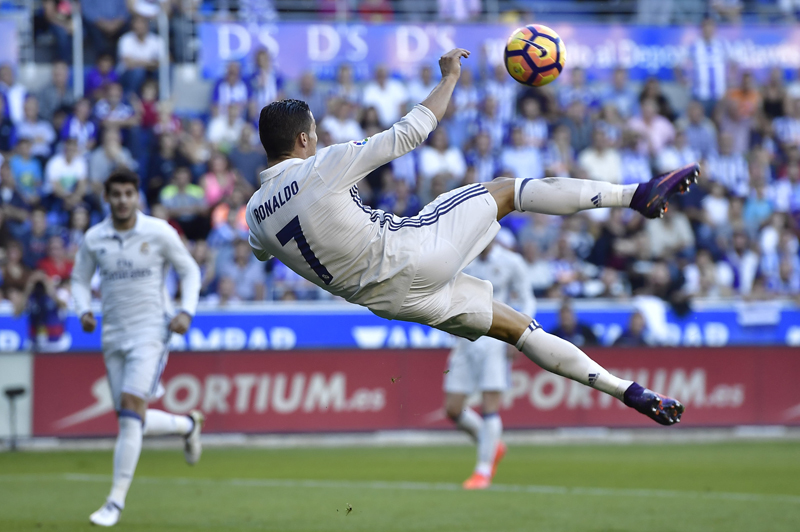 BARCELONA, Spain, Oct 30: Cristiano Ronaldo missed a penalty kick but scored three times to restore his touch and help Real Madrid increase its lead of the Spanish league on Saturday.

Ronaldo could have scored a fourth in Madrid's 4-1 win at Alaves if not for goalkeeper Fernando Pacheco, who saved his spot kick.

Madrid's win ensured it stayed two points ahead of Barcelona after the defending champion moved into second place with a 1-0 win over bottom-side Granada. Atletico Madrid also won to move into third after overtaking a Sevilla side that was the only top team to stumble.

Ronaldo's first multi-goal performance of the season for Madrid was his club record 31st hat trick in La Liga. And it came just when voices in the Spanish capital were wondering if Ronaldo's 31 years were finally catching up with him.

"(Ronaldo) is patient and is showing it on the pitch," Madrid coach Zinedine Zidane said. "I'm very happy with his performance. We are always going to ask him for goals, but he was very good in every facet today."

Ronaldo got his hat trick following his worst start to a season since his debut campaign at Madrid in 2009. Before Saturday, he scored only four times in nine matches, twice in the league and twice in the Champions League. By comparison, Barcelona rival Lionel Messi has struck 14 times in this campaign.

An early goal by Deyverson gave the home fans hope that newly promoted Alaves could add a win over Madrid to an impressive list of results, which include a shock victory at Barcelona and a draw at Atletico Madrid.

But Ronaldo leveled the score 10 minutes later from the penalty spot after Deyverson appeared to use his arm inside the area to block Gareth Bale's free kick. Ronaldo sent Pacheco the other way before firing home.

Ronaldo put Madrid in front shortly after with a vicious strike that deflected off a defender before looping over an outstretched Pacheco.

With Madrid hurt by an injury to defender Pepe that forced him to be substituted, Alaves didn't roll over, and goalie Keylor Navas had to deny Victor Camarasa and Deyverson to protect the visitors' advantage.

After Pacheco blocked Ronaldo's spot kick, Marcelo set up both substitute Alvaro Morata and Ronaldo to score in the final minutes.

"Ronaldo lives to score," Marcelo said. "He's happy today, but more so for the three points than his goals."

With Messi, Neymar, and Luis Suarez having a subdued night, Barcelona needed another goal from midfielder Rafinha in its 1,500th match at Camp Nou to see off the league's worst team.

Rafinha netted his fifth goal of the season with a bicycle kick to fire in a ball that Neymar sent off the post in the 58th.

"That wasn't our most brilliant game," Barcelona manager Luis Enrique said. "We lacked sharpness and it didn't come easy, but the win was never in danger."

Yannick Carrasco and Kevin Gameiro each scored twice to lead Atletico Madrid to another commanding win. Atletico is ahead of Sevilla on goal difference, and three points behind Real Madrid.

Gameiro's second goal to make it 3-1 just before halftime came from an excellent headed pass by Antoine Griezmann.

But Carrasco topped that effort with a scorching solo goal struck from the edge of the area after a long sprint that sealed the win in fine style.

Jorge Sampaoli's Sevilla endured its first non-win in five matches across all competitions. Luciano Vietto scored on the break to give Sevilla the lead four minutes into the away match, but Moi Gomez volleyed in the equalizer soon after.

DORTMUND, Sept 28: Borussia Dortmund scored a late equalizer to earn a 2-2 draw against Real Madrid in the Champions League on Tuesday, the... Read More...

MADRID, Sept 28: Real Madrid solved one of its problems during its trip to Germany in the Champions League: Cristiano... Read More...