Hundreds of neo-Nazis mass for festival to mark Hitler's birthday 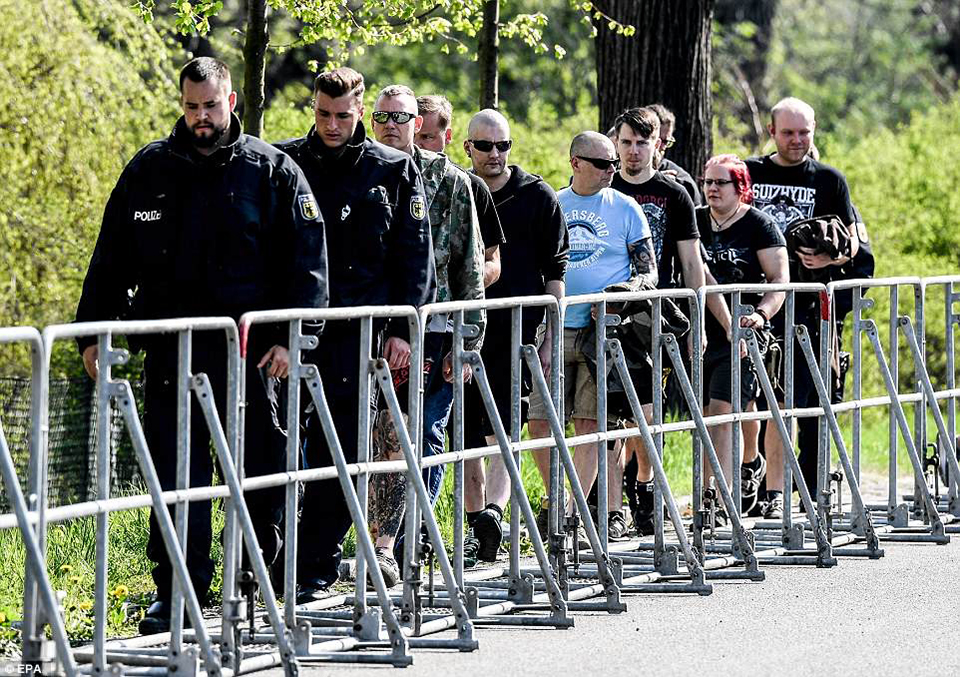 BERLIN, April 21: Hundreds of neo-Nazis were missing Friday on Adolf Hitler's birthday for a two-day festival in a remote eastern German town where citizens and anti-fascist groups staged spirited counter-protests.

Many of the mostly male right-wing extremists wore T-shirts with slogans such as 'Keepers of the Race', 'White is my favorite color' and 'Adolf was the best' while the event was guarded by a group called 'Aryan Brotherhood'.

Hundreds of armored police ringed the site of the 'Schild und Schwert' (Shield and Sword, or SS) festival near the Polish and Czech borders that was expected to also attract eastern European extremists.

Police were backed by water cannon and armored vehicles, mounted patrols and boats patrolling the Neisse border river, on the western banks of which the shaven-headed and often heavily tattooed attendees were pitching their tents or parking camper-vans.

They said they expected about 1,000 participants.

While neo-Nazis have long staged underground concerts for recruiting and fund-raising, a major two-day music festival with a tent city and tickets selling at up to €45 is seen as an escalation of an emboldened far-right movement.

The Shield and Sword lineup features bands linked to the far-right and hooligan scene as well as a 'fight night' event Saturday called 'Kampf der Nibelungen', a reference from Germanic and Norse mythology, featuring boxing, kickboxing and mixed martial arts.

'To live is to fight,' declares the event website. 'At all times it was fighters who defended their clan, their tribe, their homeland.'

The SS festival organizer is Thorsten Heise of the far-right fringe party NPD, which is openly xenophobic and anti-Semitic.

Heise led journalists on a police-guarded tour of the ramshackle compound, a hotel and former industrial textile factory that closed soon after the 1989 fall of the Berlin Wall and later suffered river flood damage.

A far-right merchandise salesman who identified himself as Tommy, 31, and wore a t-shirt with the slogan 'HTLR SCHNTZL', said Germany's biggest problem was 'the uncontrolled influx of foreigners into our homeland'.

'Look at the chaos, now we need concrete barriers at Christmas market,' he said, referring to security measures after a 2016 Berlin jihadist attack that claimed 12 lives.

The event comes as Germany, after a mass influx of asylum seekers since 2015, is witnessing a revival of far-right and ultra-nationalist groups and has seen the anti-immigration Alternative for Germany (AfD) enter parliament.

Hundreds of people also flocked to two counter-demonstrations held well away from the far-right festival in separate parts of Ostritz, a town of 2,300 people, in a remote region of the ex-communist eastern state of Saxony.

'The fight against right-wing extremism must come from the middle of society,' he said.

'I'm very happy that local authorities and police have found ways to make things difficult for the concert, so hopefully, they won't come back here again. We don't want these people here.'

Organizer of another gathering, Mirko Schultze, 50, who is also a Saxony state politician of the far-left Die Linke party, said: 'Facism is not an opinion, it's a crime

'This is a meeting of the European extreme right. We're trying to occupy the public space around the hotel site to make clear that we defend democracy here, because otherwise Ostritz will become their new meeting ground.'

Musician Sebastian Krumbiegel, 51, of the band 'Die Prinzen', said that 'over there they are celebrating the birthday of Adolf Hitler, the man who set the world on fire.'

A 75-year-old pensioner living near the festival site, who asked not to be named for fear of reprisals, told AFP: 'It is a shame that the government cannot ban this, given all the pain that Hitler brought to Germany.'