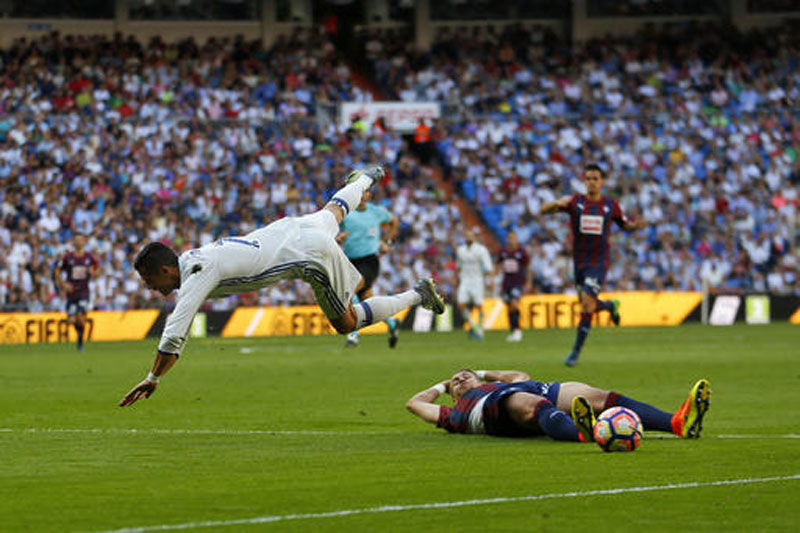 MADRID, Oct 2: Real Madrid was held by Eibar at home on Sunday, drawing for the fourth straight time and dropping out of the Spanish league lead.

Fans jeered Madrid after the 1-1 tie at the Santiago Bernabeu, which allowed Atletico Madrid to provisionally take over first place following its 2-0 win at Valencia. Atletico and Zinedine Zidane's Madrid, which had led since the first round, each have 15 points from seven matches but Atletico has a better goal difference.

Barcelona plays at Celta Vigo later Sunday and can go first on points with a win.

Midfielder Fran Rico put Eibar ahead with a header in the sixth minute and Gareth Bale equalized from close range in the 17th, but Madrid was not able to capitalize on its scoring chances until the end, prompting some booing from fans.

"That is normal when the results are not good," Madrid goalkeeper Keylor Navas said of the crowd's reaction. "The fans come here looking for the victory. They are upset, just like we are."

Alvaro Morata, who replaced Karim Benzema at halftime, had a goal disallowed for offside in the 54th, after Cristiano Ronaldo just missed with a close-range header. Bale struck the post with a header in the 60th.

Madrid was coming off league draws against Villarreal, also at home, and at Las Palmas. It also drew at Borussia Dortmund in a Champions League match.

It was the first time that the Spanish powerhouse failed to earn a victory in three consecutive league matches under Zidane.

The coach still couldn't count on key players because of injuries, including Marcelo, Casemiro and Luka Modric, who earlier Sunday successfully underwent arthroscopy on his left knee to extract a fragment of damaged cartilage.

It was the first point earned by Eibar against Madrid at the Santiago Bernabeu. The small Basque club is eighth in the 20-team standings with 11 points from seven matches.

"It was historic," Rico said. "Many players can spend years without being able to do what we did here today. We are very happy, we know it's not something you get to achieve every day."

Antoine Griezmann scored in the 63rd minute and Kevin Gameiro in injury time to give Atletico the win at Valencia despite Alves' saves in each half.

Alves stopped Griezmann's penalty in the 44th, but the France forward was able to open the scoring with a left-footed shot from inside the area early in the second half. Griezmann had already missed from the spot in the team's 1-0 win over Bayern Munich in the Champions League on Wednesday. He also missed in the Champions League final last season, when Atletico lost to Real Madrid.

The Brazilian goalkeeper also saved Gabi Fernandez's penalty in the 69th, but Gameiro sealed victory for the visitors in injury time.

"The two penalties mean nothing to me," Alves said. "I wanted to win the match."

It was the fourth win in the last five league matches for Atletico, with the only setback being a 1-1 draw against Barcelona at Camp Nou.

LONDON, Nov 28: Hired to revitalize Manchester United, Jose Mourinho is instead turning the clock back and losing his temper... Read More...