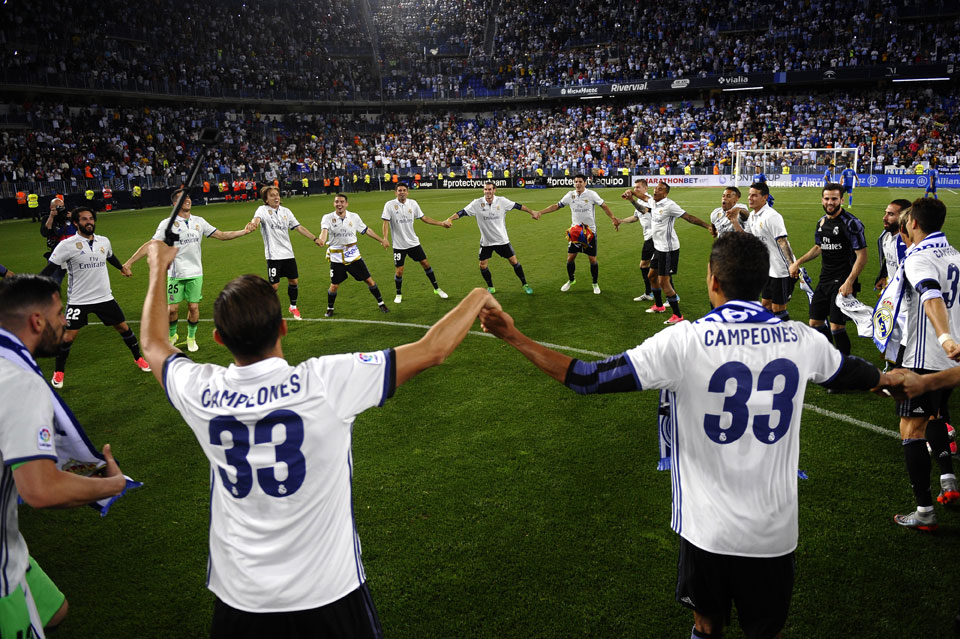 MADRID, May 22: Real Madrid won the Spanish league for the first time in five years on Sunday, and kept rival Barcelona from its third straight championship.

Zinedine Zidane's team secured its 33rd league title with a 2-0 win at Malaga with goals by Cristiano Ronaldo and Karim Benzema.

"To win the title in the last round feels that much better," Cristiano Ronaldo said. "We deserved it."

The last-round victory gave Madrid a three-point advantage over second-placed Barcelona, which rallied from two goals down to beat Eibar 4-2 at the Camp Nou.

Madrid entered the final weekend needing a draw to guarantee its first title since 2012 and avoid its worst title drought since the 1980s.

Ronaldo put Madrid in control early in Malaga, entering the area and rounding the goalkeeper before finding the open net, after a pass by Francisco "Isco" Alarcon two minutes into the match at the Rosaleda Stadium. It was Ronaldo's 14th goal in his last nine matches in all competitions.

While Barcelona struggled in its game against Eibar, Karim Benzema sealed the victory in the 55th minute off the rebound of a close-range shot by Sergio Ramos, securing Madrid its second league title in the last nine years.

Madrid hadn't gone five straight seasons without a league title since 1981-85. It will pursue its third Champions League title in four seasons in a final against Juventus in Cardiff on June 3. It would be Madrid's first double in the European competition and in La Liga in nearly six decades.

It was the first league title for Zidane, the former France great who took over Madrid for his first head-coaching job less than 1 ½ years ago.

"It is very important to lift this trophy again after so many years without being able to win La Liga," said Zidane, who was thrown up and down by his players after the final whistle. "I've won everything with this club, but this title is special. This is the happiest day in my professional career."

Players wore shirts with the No. 33 — in a reference to the 33rd title — as they celebrated on the pitch before heading back to Madrid to meet their fans in a major public plaza.

Madrid has already won the European Super Cup and the Club World Cup this season.

At the Camp Nou, Barcelona saw its chances of another league title take a hit after Japanese midfielder Takashi Inui scored in the seventh and 61st minutes.

Barcelona started its comeback with an own-goal by Eibar defender David Junca in the 63rd, and Luis Suarez equalized in the 73rd after Lionel Messi had missed a penalty kick a few minutes earlier.

Messi, the league's scoring leader with 37 goals, converted another penalty in the 75th and closed the scoring in injury time.

Eibar played a man down from the 74th as defender Ander Capa was sent off.

It was Barcelona's last game at the Camp Nou with its coach Luis Enrique, who is leaving the club after the season ends.

"I can't complain about our team," Luis Enrique said. "We fought until the final minute and we never gave up. We have to congratulate the champions."

Barcelona will play the Copa del Rey final against Alaves next Saturday.

Atletico Madrid earned a 3-1 win over Athletic Bilbao in an emotional final game at the Vicente Calderon Stadium, which will be demolished to give way to a modern housing complex.

Fernando Torres scored two goals early in the first half and Angel Correa added another in the second as the hosts said goodbye to the stadium where it has played for the last 50 years.

Atletico next season will move into the Wanda Metropolitano, a modern 68,000-capacity stadium on the outskirts of the Spanish capital.

"It's hard to express our feelings after a day like today," Torres said. "We have a lot of memories here, a lot of things went through your mind. It's been 50 years of a lot of happiness in this venue. It was an honor to be part of it."

The nearly 55,000 fans who packed the Calderon stayed at the stadium long after the final whistle on Sunday as the team organized a series of tributes for the occasion.

The stadium will still host the Copa del Rey final next Saturday, and a day later an exhibition match involving former players will officially close the venue.

Athletic Bilbao ended in seventh place after the loss at Atletico, without one of the two spots for the Europa League next season.

Villarreal secured fifth place with a 3-1 win at Valencia, and Real Sociedad ended sixth after scoring late in a 2-2 draw at Celta Vigo.

Villarreal finished with 67 points, three more than Real Sociedad and four more than Athletic, which can still qualify for Europe's second-tier tournament if Barcelona beats Alaves in the Copa del Rey final.

Third-placed Atletico had already qualified for the Champions League, along with fourth-placed Sevilla, which will have to go through a playoff to get into the competition's group stage.