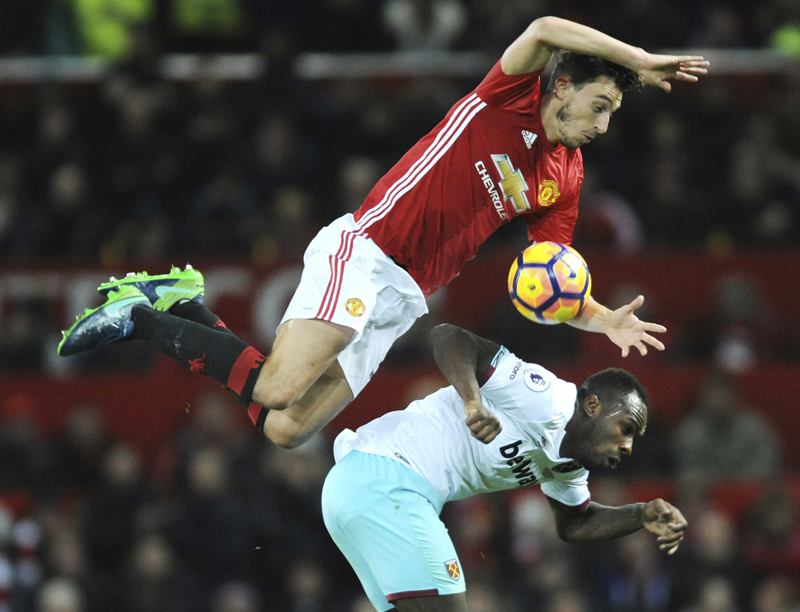 LONDON, Nov 28: Hired to revitalize Manchester United, Jose Mourinho is instead turning the clock back and losing his temper in public.

A 1-1 draw with West Ham on Sunday left United 11 points behind leader Chelsea and without a win in four league matches at Old Trafford for the first time since 1990.

That dry home spell came toward the end of a 26-year title drought which ended in 1993 with Alex Ferguson collecting the Premier League trophy. Ferguson retired in 2013 with 13 title triumphs to his name and Mourinho was appointed to recreate the Scot's winning mentality at the club after three lackluster years under David Moyes and Louis van Gaal.

The only current similarity between Ferguson and Mourinho, who was fired a year ago by Chelsea, is the fiery temper on the Old Trafford touchline. At least with Ferguson it produced results.

Mourinho was sent to the stands for the second time in a month on Sunday after being enraged by Paul Pogba being booked for an apparent dive and kicking a water bottle.

United had just recovered after conceding inside 90 seconds from Diafra Sakho's header. Pogba set up Zlatan Ibrahimovic to nod in the equalizer in the 21st minute.

"One day it will have to happen for us," said Mourinho's assistant, Rui Faria. "We'll start winning."

If they don't, United faces a second season out of the Champions League and a 30 percent drop in sponsorship cash from Adidas of around 20 million pounds ($25 million). After a third of the season, United is eight points behind Arsenal in the fourth spot to qualify for Europe's elite competition.

After a four-game goal drought, Alexis Sanchez rediscovered his scoring touch with a double either side of Theo Walcott's header.

A defensive blunder gifted Sanchez his 12th-minute opener, pouncing on the loose ball after an errant back pass by defender Steve Cook.

A dubious penalty — won and converted by Callum Wilson — allowed Bournemouth to level in the 23rd. Wilson barged into Nacho Monreal before the defender was penalized for fouling the Bournemouth striker.

Arsenal took until eight minutes into the second half to go back in front with Theo Walcott heading in Monreal's cross. Sanchez completed the win in stoppage time from substitute Olivier Giroud's pullback, highlighting the need for Arsenal to extend the Chile forward's contract which expires in 2018.

"It is important," Wenger said. "We will not sort it tonight. We have some time in front of us. You (the media) like us to spend money, so you should be happy!"

Charlie Austin scored after only 41 seconds on a miserable return to Southampton for former manager Ronald Koeman.

Josh Sims opened his Southampton debut by teeing the ball up for Austin's header.

Southampton climbed to 10th place, two points behind Everton, which has won only one of its last eight league games in Koeman's first season in charge.

The architect of the only goal acknowledged it shouldn't have been awarded.

Charlie Adam's push on Valon Behrami was missed by the referee before his header came off the post and cannoned off Watford goalkeeper Heurelho Gomes' legs into the net.

"I think it was a foul actually," Adam said.

Watford finished with 10 men. Miguel Britos was sent off in the 90th minute after receiving a second yellow card for a foul on Xherdan Shaqiri.

MADRID, Oct 2: Real Madrid was held by Eibar at home on Sunday, drawing for the fourth straight time and... Read More...

Central Committee of the CPN (US) meeting today
38 minutes ago