Real fall 16 points behind Barca after draw with Celta 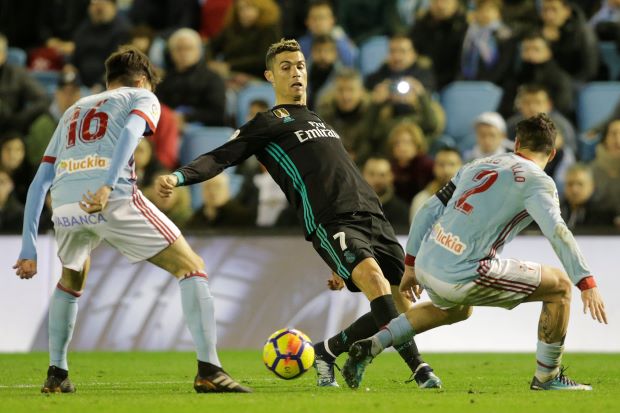 BARCELONA, Jan 8: Real Madrid’s faltering title defence continued as they were held to a thrilling 2-2 draw at Celta Vigo on Sunday which saw them fall 16 points behind runaway leaders Barcelona, who beat Levante 3-0 to stay nine points clear at the top of La Liga.

Real looked to be heading for a second successive league defeat after their 3-0 loss to Barca in their last outing when Daniel Wass lobbed over Keylor Navas to put Celta ahead in the 33rd minute.

Gareth Bale instantly responded by scoring twice in three minutes to put the stuttering champions in front before halftime but Celta came right back at Zinedine Zidane’s side, with Iago Aspas squandering a penalty before Maxi Gomez levelled with a header in the 82nd minute.

Aspas was denied another penalty late in the game while down at the other end Real’s Lucas Vazquez hammered the ball straight at Celta goalkeeper Ruben Blanco, while Cristiano Ronaldo fired wide of the near post.

Real stay fourth in the standings on 32 points while Barca have 48 although they have played one game more.

Real travelled to Vigo without Dani Carvajal, striker Karim Benzema and captain Sergio Ramos while Celta, who knocked Real out of the King’s Cup last season, were emboldened after drawing 1-1 with Barca in the Cup on Thursday.

Bale made his first start in the league since Sept. 20 after finally recovering from persistent muscle problems and pulled Real level after Wass’s strike with a slick first-time finish before giving them the lead by knocking a pass from Isco in with his back heel.

Celta appealed for Navas to be sent off when he felled Aspas and was only shown a yellow card while the Costa Rican was also let off when he stepped off his line before diving to his right to palm away the striker’s spot-kick.

“We made a lot of errors, we gave the ball away a lot, something we don’t normally do and we did it at important moments in the game, when we could have caused them more damage,” Real coach Zinedine Zidane told reporters.

“We have to stop making these errors and be more consistent.”

Barcelona had seen their lead over nearest challengers Atletico Madrid reduced to six points on Saturday but restored the gap to nine after Lionel Messi, Luis Suarez and Paulinho scored in a routine win over Levante.

Barcelona thrashed Sporting Gijon 6-1 to go top of La Liga on a dramatic night in Spain on Wednesday as... Read More...