Rautes begging to celebrate Dashain despite welfare funds worth millions 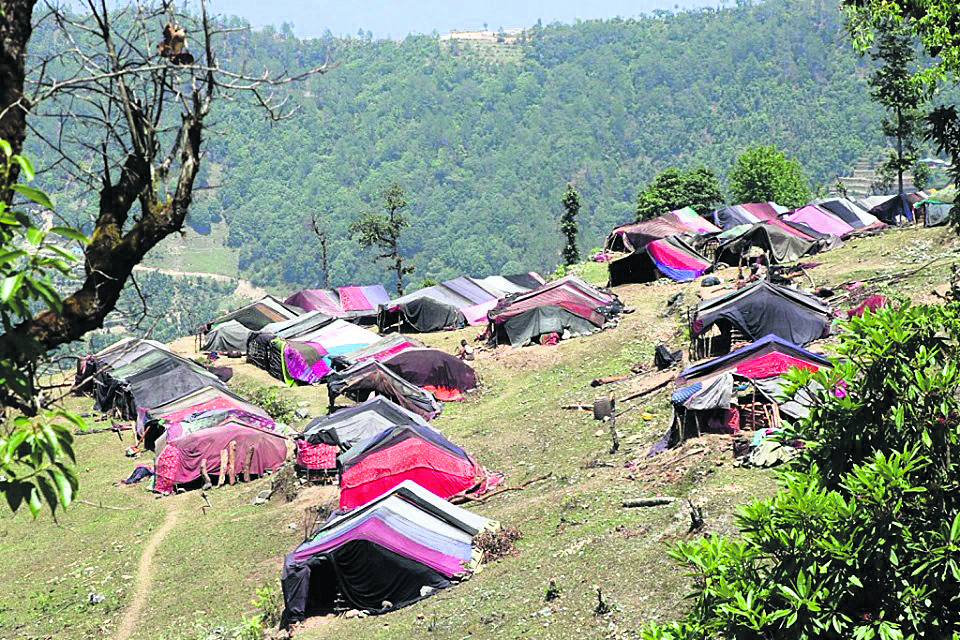 A Raute settlement is seen in Dailekh in this recent picture.

DANG, DAILEKH, Oct 1: Until two decades ago, ‘life was fun’ for the Rautes (a nomadic ethnic group). Dashain or any other festival would be even greater fun. There was a different kind of social fabric back then.

They would carry utensils made of wood and visit door to door and villagers would give them food and vegetables. They would be loaded with gifts even without asking.

They would intensify hunting for boars, monkeys and birds during such festivals. And the meat would last for days.

“Starting from Fulpati to the end day of Dashain, they would only be merrymaking,” recounted Satya Devi Adhikari, president of Raute Utthan Pratisthan. “They would dance, sing and make surrounding environment very vibrant,” she added.

According to Adhikari, culture and tradition of the Raute community is already on the verge of extinction. Their Dashain is no more the same now. “Neither do they go for hunting, nor visit villages for food,” she said.

“They are actually adapting to the mainstream life style. They love to slaughter goats just like others do, some prefer chicken and some families like to have both,” she added.

There were dense forests around Raute settlements in the past, where they would hunt. These days, forests have thinned across the district. Similarly, community forest members guard it from Rautes.

“Their lifestyle got hitched as the villages gradually transformed into towns and things changed around them. They had little choice left other than to adapt,” Adhikari explained.

Dashain has now become quite costly for the Rautes, as they now confirm to the mainstream culture. To fulfill their needs, they now travel to different districts and seek alms.

“It is Dashain and we need money to celebrate it. Therefore we are reaching out to different government offices and requesting for donations,” said Narayan Shahi, a Raute leader.

“We have to collect donations so that our community members can celebrate Dashain,” he added.
Shahi stated that arrangement of goat for Dashain feast is more challenging. “Once we are able to arrange a goat for feast, everything else will be in the right place,” he said, adding, in the lack of it Dashain will be colorless.

The local of Dailkeh Shai, along with his community people, was in Dang last week for the very purpose. He said that he had visited several government offices for managing Dashain expenses.
There are several organizations including Samajik Sewa Kendra and Raute Utthan Pratisthan which claim to work for the welfare of the Rautes. The government allocates separate budget for them. And yet, Rautes remain poor. When they get sick or need some emergency help, they have no way but to beg for help.

Officials at the Samajik Sewa Kendra informed that Rs 4.6 million has been allocated for the welfare of Raute and is supposed to be spent by 2020. According to Basanta Shrestha, the project manager, the organization has been working towards improving health and nutrition status among Raute. “This project expires in 2020 and there is budget of Rs 4.6 million,” he said.

He stated that there is no need for the Rautes to beg from anyone but do so out of habit. “Even though they are provided with food and other necessities, they don’t stop begging,” he remarked.
But Rautes denied such claims. They state that not a single organization is actually interested in really helping them. “They do talk to us a lot, but they do not really care. We have to manage everything on ourselves,” Mukhiya told Republica. “If they provided us everything we would not have to travel here and there to arrange resources for celebrating Dashain,” Mukhiya added.
Around 200 Rautes live in different jungles of Dailekh.