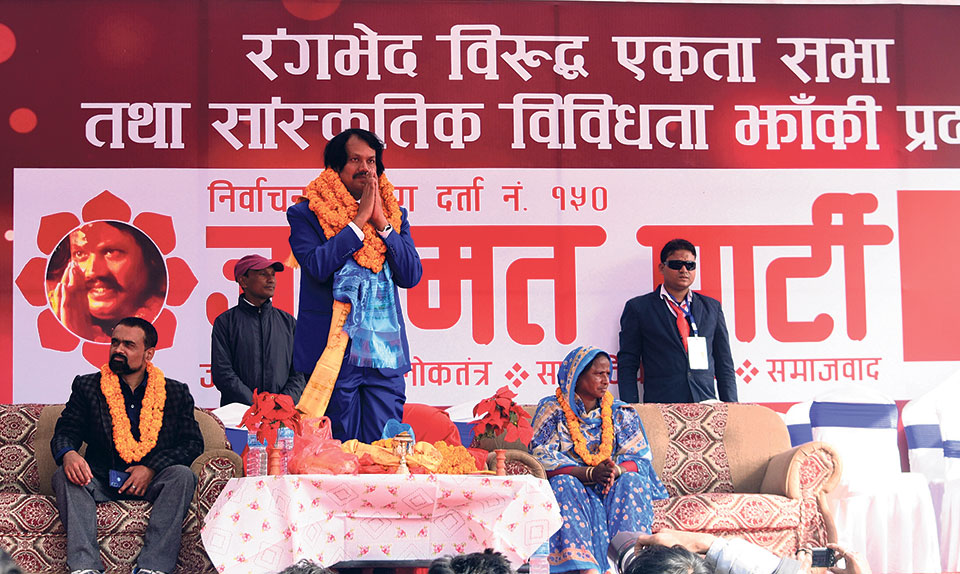 KATHMANDU, Nov 24: Janamat Party led by CK Raut, who was once outlawed for his secessionist agenda, organized a mass rally in Bhrikuti Mandap area in Kathmandu against what it called “color discrimination”.

This is the first mass protest organized by Raut-led Janamat Party in Kathmandu after it reached an agreement with the government to renounce its secessionist agenda and join mainstream politics in the country in March earlier this year. Raut had later registered Janamat Party with the Election Commission in May following the agreement.

A large number of people from Madhesh and elsewhere currently living in Kathmandu Valley had joined the rally named “Unity Rally Against Color Discrimination”. This is probably the first time any Madesh-based political party has organized this kind of rally in Kathmandu.

Addressing the rally, chief of Janamat Party Raut said the rally was an unprecedented event in the history of Nepal and creation of history in Nepal.

Raut alleged that although those who built Nepal as a nation did not even think of racial or color discrimination, rulers of the country later institutionalized this discrimination against people of the same country. He also recalled that Madhesi people had faced obstruction in Kathmandu when a Madhesi leader Gajendra Narayan Singh tried to organize mass rally in Kathmandu in the past.

Raut also argued that there is no point in questioning the patriotism of Madhesis as they are the people who have been safeguarding the border unarmed. “It was a golden period when Madhesis ruled this nation. Nepal was one of the prosperous countries in the world until Madhesis ruled this country,” he further said.

Raut complained that although Madhesis have been contributing to the nations in different ways they have been subjected to discrimination in all political systems since the time of Rana oligarchy, including monarchy, democracy and republican system. While highlighting the important roles played by Madhesis in all political changes that have taken place in the country so far, he vented ire that Madhesis were denied fair share of their participation in the state structures.

Observes in Kathmandu have termed the rally led by Raut’s party as an indication that his party aims to establish its strong presence among the people in the southern plains, voicing their issues and concerns prominently.

LAHAN, Dec 26: Members of the Janamat party led by CK Raut vandalized over a dozen vehicles in Siraha on... Read More...