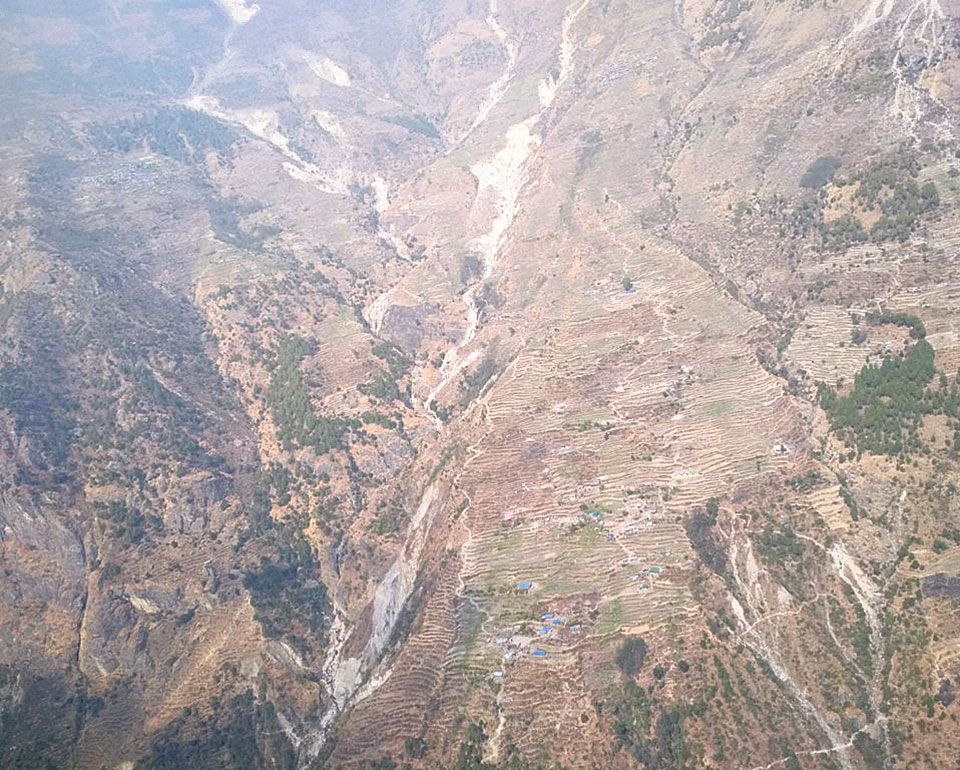 RASUWA, July 15: Massive landslides in Yabru village of Naukunda Rural Municipality wreaked havoc in the settlements last year. The landslides had rendered the land unsafe for settlement. Though the residents of the village lived in temporary shelters for some days, they returned and started living there after some weeks. They were aware of the looming threat of landslides, but returned stating that they did not find any place to relocate.

After nearly a year, the same villagers are frantically searching for a safer place to relocate. Because of the torrential rain during the past few weeks, the fragile landscape of the village has become even fragile, villagers claim. Small landslides can be seen around the village and the sight has terrified the villagers even more.

“We spent last monsoon fearing landslide throughout the season. The fear of being swept away or buried under the landslide tormented all of us day and night last year,” said a local Ganesh Tamang. “Though we survived last year, we don’t think landslides will spare our village this time. Already there are many landslides around here. Landslides can bury this village at any moment,” he said adding that everyone in the village is living in constant fear.

There are around 110 families in the village and all of them are presently looking for safe place to relocate. Last year, landslides washed away much of the land below the village. This year, the villagers claim that the land above their village can come down at any moment and bury the whole village. “Last year we returned because our houses were not destroyed by the landslides. The landslides had swept much landmass at the bottom of the mountain on which our village is situated. However, this year, it seems the mountain above our village is going to going to come crashing on the village.” Tamang said that they have been searching for better location to shift their families to but have not found any suitable place so far.

According to locals, the landslides could have been controlled if the rural municipality had worked on diverting water from entering the land cracks by construction water diversions on time. “If the rural municipality had constructed water diversion canals on time, the water would not have sipped in the cracked land. We were waiting for them to take some action. But now, it’s already late, we are not safe,” said Tamang.

Recently locals themselves took the initiatives and started constructing water passages but Tamang shared that it might be too late now. “We should have worked on building those water diversions few months back. I think it’s too late now,” he lamented.

House swept away by landslides
Landslide destroyed the house of Bir Bahadur BK of Bhanjhyangdanda, Naukunda Rural Municipality - 4 Friday night. Though there has been no human causality, it has left the family homeless. “We were having dinner when we heard a lot of hustle and growling sound. All of us rushed out of the house and started running away from the house. When we turned back, our house was completely buried under the landslide,” BK narrated.

Over 1,000 households under risk
Over thousand households are at severe risk of landslides in the district. National Reconstruction Authority has claimed that more settlements are facing greater risk of landslide because of the earthquakes in April 2015. Until last year, it had identified that 836 houses were prone to landslides. However due to torrential rainfall this monsoon, more houses have been added to the category.

“We have established disaster response funds under special disaster management and response committees at the local level. In case of natural disaster, these committees will be coordinating with concerned bodies to escalate rescue and relief operations,” said the district CDO Krishna Poudel. “The committee at the district level will coordinate with local bodies, civil society and NGOs. A dedicated hotline has been taken for the committee and its number has been advertised,” he added. Poudel stated that District Disaster Management Committee is leading the local level disaster management and response committees.