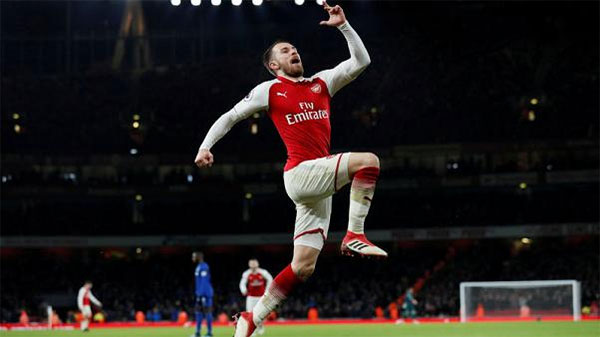 Feb 4: Aaron Ramsey scored a hat-trick on Saturday as Arsenal thrashed Everton 5-1 in the Premier League at the Emirates with a display of free-flowing football that the Gunners have sorely lacked away from home this season.

The home side blasted in four goals in the first half to put the game beyond doubt, leaving their woeful midweek loss at Swansea far behind them.

Ramsey scored twice inside the opening 20 minutes, either side of a headed goal from defender Laurent Koscielny.

The win leaves Arsenal unchanged in sixth place in the table, three points adrift of north London rivals Tottenham Hotspur, who visit Liverpool on Sunday. The Gunners travel to Spurs in a week’s time.

Everton’s loss pushes them down one spot in the table to 10th.

By the end of the first half Everton forward Oumar Niasse cast a forlorn figure, with the rest of his team appearing stuck in an ultra-defensive 5-4 formation deep in their own half.

But the visitors looked sharper at the start of the second half and came close with Niasse striking the post.

Forward Theo Walcott was substituted off on the hour mark to a standing ovation from his former club, and was replaced by Dominic Calvert-Lewin, who moments later headed in from close range.

That goal means the Gunners have failed to keep a clean sheet in the Premier League since mid-December.

Everton manager Sam Allardyce had been hoping his team would emulate the skill with which Swansea took three points off Arsenal on Tuesday. Instead he blasted his players’ “pathetic performance” in no uncertain terms at a post-match news conference.

“We set out to play that way but Swansea played at the top of their game and we played at the bottom of our game. The whole team played crap,” he told reporters.

By contrast, Arsenal manager Arsene Wenger expressed satisfaction with the level of skill his players brought to the game.

“We were quick, mobile, technically very sharp. We finished very well as well,” he said, adding that he was happy with the way his new players had integrated with the team.

“Overall it was a very convincing first performance,” he said of new signings Mkhitaryan and Aubameyang.

He singled out Mkhitaryan for praise after the Armenian helped to create three of his side’s goals, linking up repeatedly with winger Hector Bellerin on the left to pull Everton out of shape.

“He’s a good link player and works very hard as well. He looked well-accepted by the rest of the team.”

ENGLAND, Dec 14: With the tackles flying in and the noise levels ramping up inside Goodison Park, Arsenal's players faced a huge test... Read More...