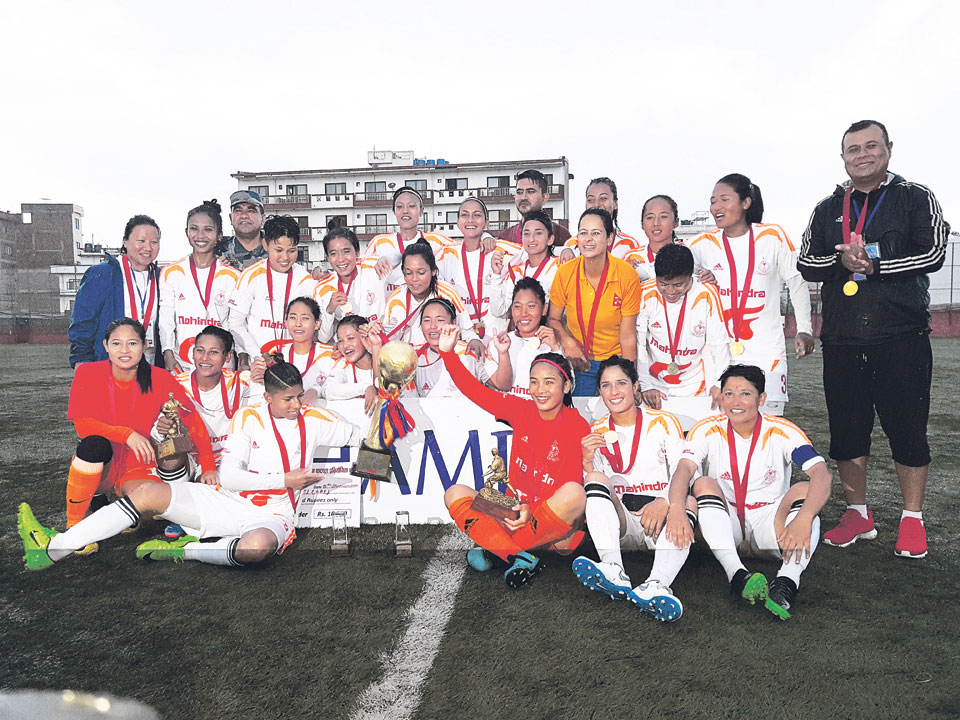 KATHMANDU, August 1: A Sabitra Bhandari inspired performance helped the departmental team Armed Police Force Club (APF) register a 3-1 victory over the other departmental team Tribhuvan Army Club in the league decider and clinch the Vice-president National Women’s League at the ANFA Complex in Satdobato on Tuesday. Bhandari scored a hat-trick for APF, who finished the league unbeaten.

APF took the lead through Bhandari on the 41st minute, but Army showed some signs of recovery as it equalized into the fourth minute of the second half.

In a tightly-contested match, APF took the lead again as Bhandari scored her brace in the 54th minute. Bhandari scored in the 82nd minute again to bag a hat-trick, which was enough to seal the title.

A total of five teams, three departmental teams APF, Army and Police, including Kathmandu and Rautahat District Football Association, took part in the tournament which started on July 23.

APF’s Bhandari was adjudged the best player of the tournament for her commanding goalscoring performance and was rewarded with Rs 25,000.

Likewise, APF’s Janak Singh was named the best coach, while Rautahat’s Rashi Kumari Ghising won the best forward title. Similarly, Army’s Punam Jharga Magar, APF’s Renuka Nagarkoti and Anjila Thumbapo Subba were declared the best defender, the best midfielder and the best goalkeeper of the tournament respectively.  They all got Rs 10,000 each.

Congress formally decides to vote against PM Oli
21 hours ago

ICUs in Valley overwhelmed, patients are flying out to other cities
6 hours ago
Dogadakesar Rural Municipality to use all its vehicles to transport COVID-19 patients
6 hours ago