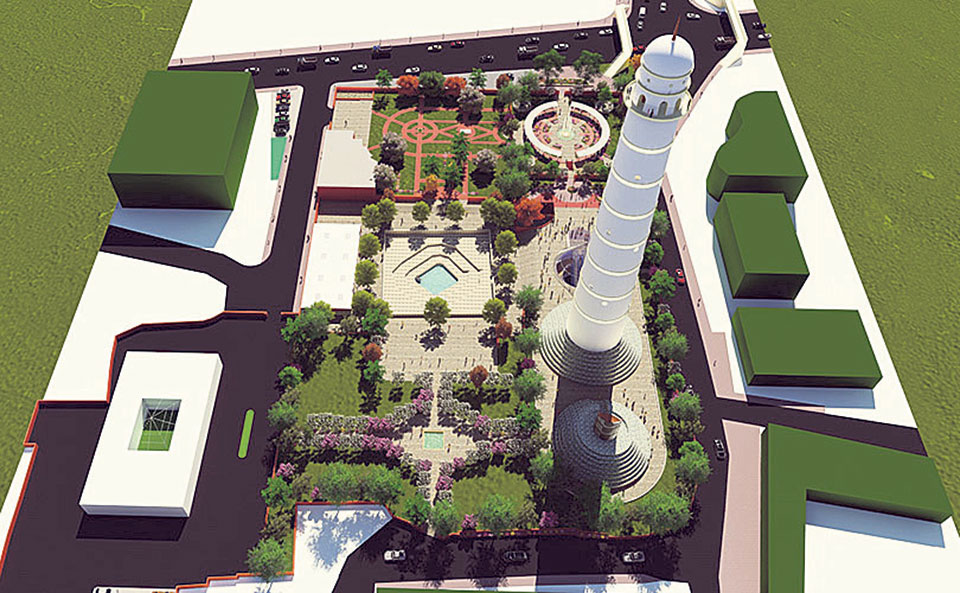 KATHMANDU, Sept 3: The National Reconstruction Authority (NRA) has finally opened the financial proposals submitted by five firms bidding for the reconstruction of Dharahara.

Raman Construction in joint venture with a Chinese company ZIETC is the lowest bidder with a quoted price of Rs 3.45 billion. NRA will soon invite the firm to sign a contract for rebuilding the Dharahara, which was destroyed at the first jolts of the April 25, 2015, earthquake.

Earlier, the notice for bid-opening slated for June 12 was put on hold as directed by the Office of the Prime Minister and Council of Ministers (OPMCM) following a complaint by one of the competitor firms, CICO-Kalika-Rasuwa, asking NRA to investigate the documents submitted by Raman Construction.

The opening of the financial proposals was postponed eight times since then and opened on Sunday.

CICO-Kalika-Rasuwa, which tried to disqualify ZIETC-Raman JV through the complaint, has quoted a price of Rs 4.39 billion, the second lowest bid. The difference is of Rs 940 million which will be saved if ZIETC-Raman JV gets the contract. Kumar- CFEC JV, ZIEC Lama JV and CR5CIC-Swachhanda JV quoted the prices of Rs 4.49 billion, Rs 4.5 billion and Rs 4.52 billion respectively.

NRA’s joint secretary Raju Man Manandhar informed Republica that they opened the financial proposals on Sunday after getting the nod from the OPMCM.

“The delay in opening the financial proposals was mainly a ploy to buy time for collusion between government officials and contractors but this ploy failed due to public pressure and media reports,” said a contractor who is also an executive of the Federation of Contractors’ Association, Nepal seeking not to be named.

A high-level official at NRA also echoed the contractor saying that collusion among the contractors except ZIETC-Raman JV is evident according to the prices quoted by them in the bid. “Kalika-Rasuwa group was sure to get the contract as all others quoted higher prices,” said the privy source adding that those involved in collusion tried for nearly two months to bag the contract.

Two big contractors were in a tug of war to win the contract also using their political nexus. At least three privy sources Republica talked to also claimed that the officials of the OPMCM had come under the influence of CICO Kalika-Rasuwa JV and put the process on hold. Promoter of Kalika Construction is former minister Bikram Pandey and that of Rasuwa Construction is Mohan Acharya, a lawmaker of the House of Representatives.

On the other hand, Raman Construction had complained about the possible collusion with the chairman of Nepal Communist Party, Pushpa Kamal Dahal. Speaking at the annual general meeting of the Chitwan Contractors Association in Chitwan on Wednesday, Dahal had said, “There is a nexus between the contractors and government secretaries in procurement. I told government secretaries not to do so but they did not listen to me and did as they wanted.” Though Dahal did not name the secretaries, his hint was clearly at the secretaries of OPMCM and NRA,” according to two contractors who participated in the event.

Organizing a press meet on June 13, Managing Director of Raman Construction Pvt Ltd Balaram Mahato had claimed he had been offered money to surrender to the collusion.

ZIETC-Raman had also filed a counter claim at OPMCM when the opening of the financial proposals was put on hold suddenly on June 12.

BANEPA, Oct 28: The family of Maya Lama of Panauti-1, Manedovan has spent four monsoons and three winters under the... Read More...