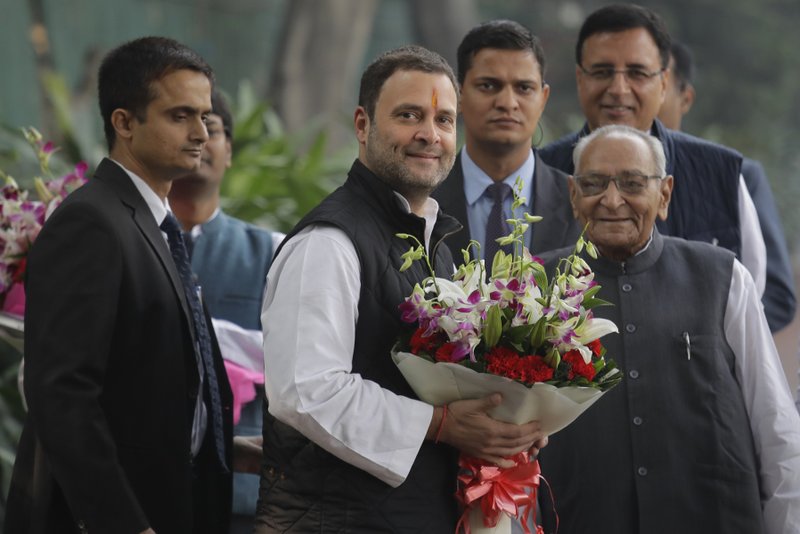 Without a serious rival for the top party post, Gandhi is likely to be elected Dec. 16.

He faces a challenging task of reinvigorating the party, which was ousted from power by Prime Minister Narendra Modi’s Hindu nationalist Bharatiya Janata Party in 2014. Modi is expected to seek re-election for a second five-year term in 2019 national elections.

The task is even more formidable with the Congress party suffering humiliating defeats in recent state elections, notably in Uttar Pradesh state, despite Gandhi’s active campaigning to win back people’s support.

Former Prime Minister Manmohan Singh announced Gandhi’s nomination at party headquarters. “This is yet another step in quest for serving the people through the Congress party,” he said.

Modi said Gandhi’s proposed elevation showed the Congress is a family-dominated party. “We don’t want this Aurangzeb rule,” he said at a public meeting in western Gujarat state, referring to Mughal emperors who chose their successors.

Gandhi entered politics in 2004, holding a parliamentary seat representing Uttar Pradesh state. The seat was held by his mother, Sonia Gandhi, until she shifted to a neighboring constituency. He was appointed party vice president, a position behind her, in 2013.

Sonia Gandhi has led the party for 19 years. She has had health problems but the family and party have released little information about them. She had surgery in the United States for an undisclosed reason in 2011, and has returned to the U.S. for regular check-ups since then.

Rahul Gandhi will be the sixth member of the Nehru-Gandhi family to lead Congress. His father Rajiv Gandhi, grandmother Indira Gandhi and great-grandfather Jawaharlal Nehru have served as prime ministers since India’s independence from British colonialists in 1947.

Party workers have been demanding Rahul Gandhi’s elevation since 2013.

His supporters argued he was rebuilding the party at the grassroots level and has taken a lead in Congressional campaigns in state elections in Uttar Pradesh and in Bihar in recent years. The party performed poorly in both states’ elections last year.