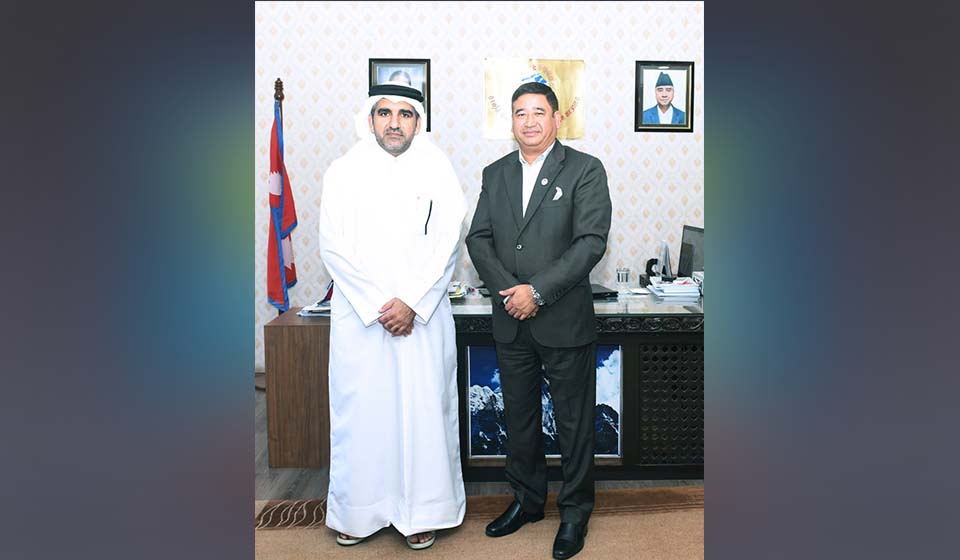 KATHMANDU, August 29: The Ambassador of Qatar to Nepal, Yusuf Al-Hail,  has paid a courtesy call on Minister for Culture, Tourism and Civil Aviation, Jeevan Ram Shrestha.

In a meeting held at the Ministry of Culture, Tourism and Civil Aviation on Monday, they discussed the possible cooperation between Nepal and Qatar in promoting tourism, as well as the bilateral relations between the two countries.

Acknowledging that it’s been 46 years since the establishment of diplomatic relations between Nepal and Qatar, Minister Shrestha said that he wishes to further expand the relations and cooperation between the two countries.

The minister and the Qatari envoy also discussed promoting Nepal's tourism at the 22nd FIFA World Cup tournament to be held in Qatar in November. Ambassador Hail said that the government of Qatar is always ready to support Nepali tourism.

They also discussed making Nepal-Qatar two-way air service more effective. On that occasion, there was also a discussion on Qatar Airways operating international flights from the Gautam Buddha International Airport.

At the end of the meeting, Ambassador Hail invited Minister Shrestha to visit Qatar.

KATHMANDU, April 21: The Qatari government has confirmed that the visa center will bear all the expenses of the medical... Read More...

Lessons for Nepal from post-blockade Qatar