KATHMANDU, April 3: Nepal U-19 national cricket team’s final 14-men squad has been announced for the upcoming ICC U19 Cricket World Cup Qualifier Asia 2019 on Tuesday. The tournament is set to be held in Malaysia from April 10 to 18.

The team boasts of plenty of experience with four players who, recently selected for the senior national cricket team during the United Arab Emirates tour, have been included to represent Nepal in the important event in Malaysia.

The youngest half-centurion in international cricket Rohit Kumar Paudel has been provided with the responsibility to lead the team ahead of former captain Aasif Sheikh who led the team in Youth Asia Cup earlier this year.

The world record holder for the youngest half-centurion in T20I cricket, Sundeep Jora, will provide stability in the middle order supported by Bhim Sarki. Likewise, the experience of Pawan Sarraf -- an off-spinning all-rounder who can also open -- will be key for Nepal team.

The consistent fast bowling duo of Rashid Khan and Kamal Singh Airee will be complimented by the left-arm spin bowlers Sagar Dhakal and Surya Tamang. Rit Gautam also retained his place after doing considerably well for the team in the last few tours.

Malla’s left-arm spin and big hitting with the bat make him the favorite to feature in the playing XI ahead of fellow debutants.

The new captain Paudel was confident on the balance of the squad. He was vocal about players being in good form who knew their roles in the team ahead of the important qualifier event.

“The players know their role which is a good thing heading into a crucial tournament. We are feeling good collectively with our performances in the recent practice tour. There are few experienced players in the squad which certainly makes my job easier in the middle. We can always talk to each other in difficult situations,” Paudel said.

Paudel welcomed the newcomers who, according to him, are set to freshen up the squad. He is especially excited about the left-arm pace bowling of Pratish GC. “The newcomers are always refreshing. They bring new ideas in the team. Pratish has done well swinging the new ball and also bowling well in death overs.”

Similarly, Hari Bahadur Chauhan, the seam bowling all-rounder turned wicket-keeper batsman, was ecstatic to be selected for the first time in the national team. He shared how head coach Das helped him for a swift transition in the new role for the team.

“This will be my first time as a wicket-keeper batsman. The team required a back-up keeper for the tour and the coach trusted me to do justice with the role. He had seen me wicket-keeping for Dhangadhi Stars during DPL. He also had given me few matches with gloves during the practice tour of India.”

Nepal team will be travelling to Malaysia on April 6. There will be no practice matches in Malaysia for the national team. Nepal, UAE, Malaysia, Oman, Singapore and Kuwait will be competing in the single round-robin format for one qualification spot from the Asian region into the main draw of 2020 U19 World Cup in South Africa.

Nepal will face Singapore in its inaugural match of the tournament on April 12 at UKM Oval.

The previous edition of Asia qualifiers saw Afghanistan beat Nepal in the final to secure its spot in the 2018 edition of U19 World Cup in New Zealand.  Now a test nation, Afghanistan has automatically qualified for the upcoming edition of the world cup in South Africa in 2020. 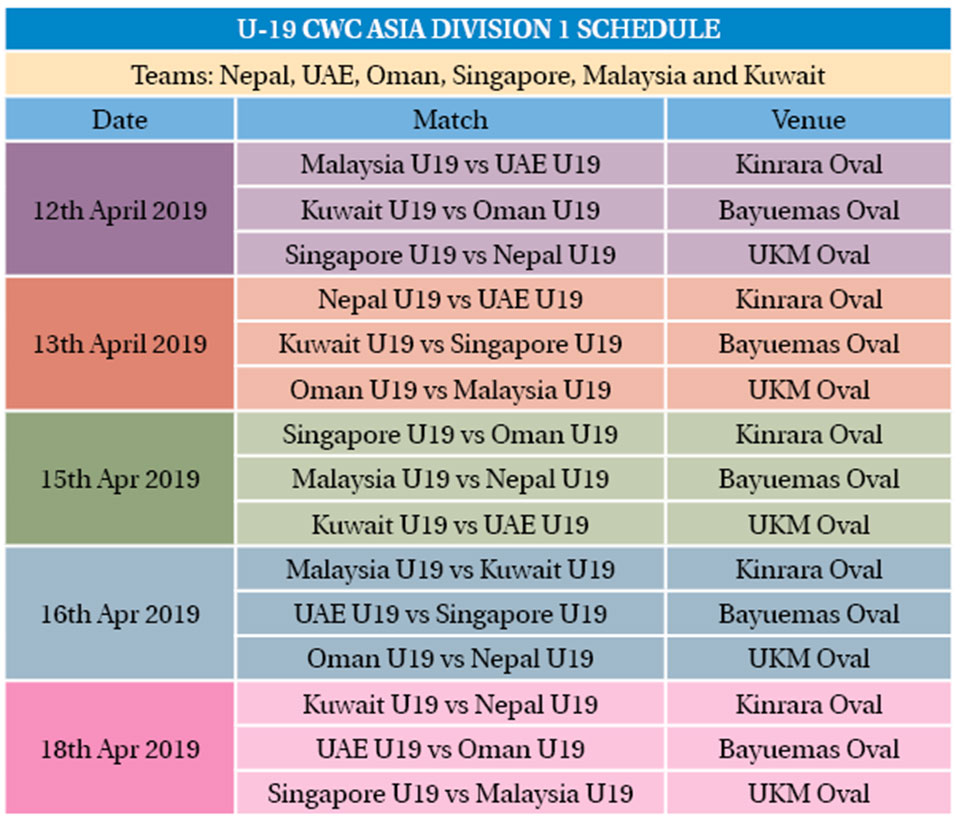