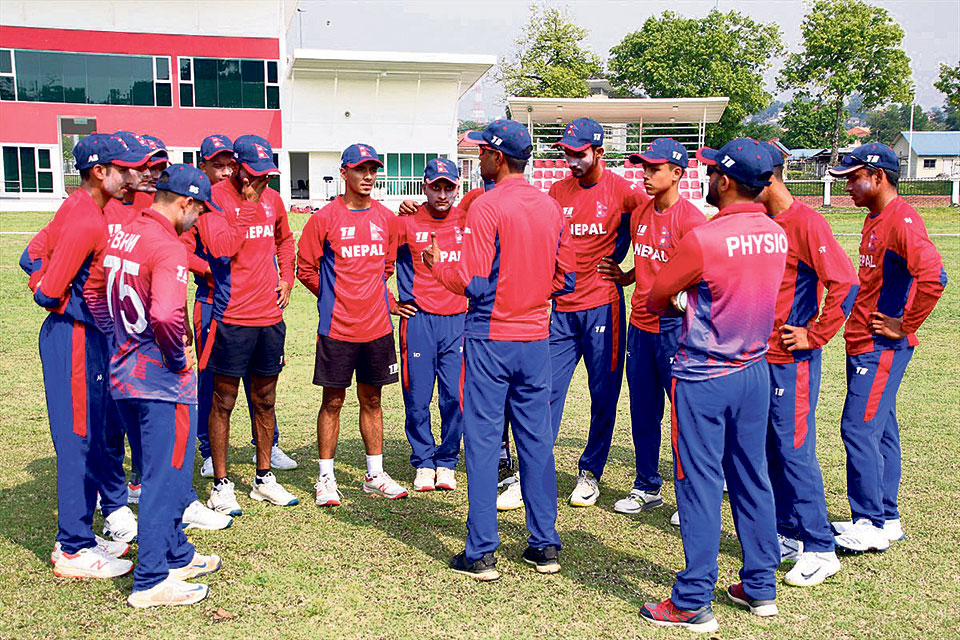 Nepal U-19 cricket team head coach Binod Das instructs the players during a practice session at the UKM Oval in Bangi, Malaysia in this recent photo. Photo Courtesy: Raman Shiwakoti

KATHMANDU, April 11: Nepal U-19 national cricket team will begin its world cup qualification challenge with a match against Singapore on Friday. Nepal starts as strong favorite for the regional Asian qualifier which provides teams with a winner-takes-all opportunity to compete in the World Cup.

Nigeria’s success in claiming a world cup spot has been inspiring for all the teams involved in the Asian leg. Along with Nepal and Singapore, home team Malaysia, Kuwait, Oman, and the UAE will compete in the ICC U-19 Cricket World Cup Asia Qualifiers taking place between 12 and 18 April, where the winner will become the 13th team to confirm their place in the ICC U19 Cricket World Cup in South Africa in 2020.

This is the second stage for teams in Asia, who due to the depth of strength in the region, competed in a Division 2 in 2018, where Kuwait and Oman qualified to continue their U19 journey.

Nepal’s 14-men squad was announced last week with a good mixture of new and experienced players. Four players including skipper Paudel were recently selected for the senior national cricket team during the UAE tour.

The youngest half-centurion in international cricket, Paudel replaced Aasif Sheikh who led the team in Youth Asia Cup earlier this year. Sheikh has been struggling for form in recent years and the competition for places prompted management to release him from captaincy duties. Two back up wicket-keepers -- Rit Gautam and Hari Bahadur Chauhan -- are selected to provide cover for Sheikh.

Opening batsman Gautam had represented Nepal in Youth Asia Cup in 2018 and ACC U-16 Eastern Region Championship in 2017. Similarly, Chauhan, who first came to reckoning after registering a century and a hat-trick in a single 50-over match during Inter-provincial Prime Minister Cup in 2017, is representing Nepal for the first time in international level. He gave up his seam-bowling skills to move his career further as batsman who can keep wickets.

The world record holder for the youngest half-centurion in T20I cricket, Sundeep Jora, will provide stability in the middle order supported by Bhim Sarki whose stakes have risen rapidly in the last year or so.

Newcomer Avishek Basnet will look to enforce his way into the playing XI in case of a starter’s lack of form or fitness.

Likewise, in all-rounder’s category, the experience of Pawan Sarraf -- an off-spinning all-rounder who can also open the batting -- will be key for Nepal team for flexibility. Sarraf will be complimented by all-round skills of new member Kushal Malla. Malla’s left-arm spin and left-hand big hitting with the bat make him the favorite to feature in the playing XI ahead of fellow debutants.

Nepal recently won the Andhra Pradesh tour 6-2 against the state team Andhra Pradesh’s U-19 team which has made captain Paudel positive ahead of the important tournament.

“The players know their role, which is a good thing heading into a crucial tournament. We are feeling good collectively with our performance in the recent practice tour. There are few experienced players in the squad which certainly makes my job easier in the middle. We can always talk to each other in difficult situations,” Paudel told Republica.

The consistent fast bowling duo of Rashid Khan and Kamal Singh Airee will be complimented by the left-arm spin bowlers Sagar Dhakal and Surya Tamang. Left-arm pace bowler Pratish GC has been graduated to U-19 team for the first time after representing Nepal U-16 national team alongside Gautam.  Skipper Paudel has high hopes with the newcomer.

According to the performance in the recent practice tour, most places in Nepal’s playing XI is more than settled with one between Gautam, Basnet, and Chauhan and one between Tamang and Pratish set to make the final XI against Singapore. Inclusion of Pratish will allow Nepal with an extra option seam bowling. Sarraf, Dhakal, and Malla are more than capable of bowling 30 overs in the match in a track helpful to spin bowling.

Nepal had last played U-19 world cup in Bangladesh in 2016 before missing out on 2018’s marquee age-level event which was held in New Zealand and won by India. Head coach Binod Das, who has represented Nepal numerous times for U-19 world cups before, said that the practice tour to India was effective and players now feel confident ahead of the qualifiers.

“We feel appropriately prepared for the qualifiers after our 15-day practice tour in India. We don’t know our opponents’ strength yet, but we trust in our ability against them.”