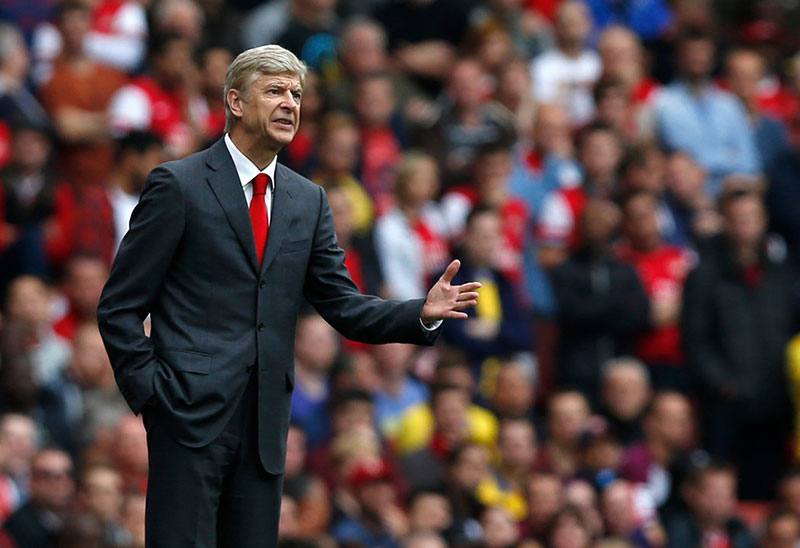 PARIS, Sept 12: One is a veteran of nearly 20 years at his club, the other started his new job only months ago. Both share the same goal: delivering European glory with teams lacking a Champions League title.

Paris Saint-Germain coach Unai Emery and Arsenal manager Arsene Wenger are on opposite trajectories when the Champions League resumes for their teams on Tuesday at the Parc des Princes. It will be Emery's first Champions League game as PSG's coach, while Wenger is starting a 19th consecutive campaign in Europe's most prestigious competition.

On the Champions League opening day, five-time winners Barcelona hosts Celtic — a team it inflicted six goals on the last time they played in the group stage — and Bayern Munich takes on Russian newcomers Rostov.

Here is a look at Tuesday's matches:

Unlike his former great rival Alex Ferguson, who turned Manchester United into a European powerhouse, Wenger has not tasted Champions League success since he was appointed Arsenal's manager 20 years ago.

Despite qualifying for the lucrative tournament for an English record 19 consecutive seasons, Arsenal has never won Europe's biggest prize, losing to Barcelona in the 2006 final.

The Gunners, who have won their last seven Champions League games in France, are looking to get beyond the last 16 for the first time since 2010.

Emery's record in the Champions League is quite disappointing compared to what he achieved with Sevilla in the Europa League. Emery, who replaced Laurent Blanc this summer, guided Sevilla to a third consecutive Europa League title last season but led his various teams to just eight Champions League wins in 25 games.

Arsenal, a team that has long had a heavy French influence, could be spearheaded by a France international for its trip to Paris with striker Olivier Giroud pushing for his first start of the season.

Basel hosts Ludogorets in the group's other game.

Benfica and Besiktas meet for the first time in European competition with the group looking wide open.

Benfica lost to Bayern Munich in the quarterfinals last season and Besiktas is looking to make it to the knockout round for the first time.

Jonas, who led Benfica in scoring last season, has been sidelined with a right foot injury since August.

Fellow strikers Kostas Mitroglou and Raul Jimenez, along with defender Jardel, all missed practice on Monday morning because of physical problems.

Hosting Napoli in the group's other match, Dynamo Kiev has a poor record against Italian sides, having won just twice in 20 matches with Italian opposition. Back in the Champions League after exiting in the group stage two seasons ago, Napoli is attempting to overcome the departure of standout striker Gonzalo Higuain to Juventus. Jose Callejon has been filling in quite nicely, scoring two goals in each of Napoli's last two Serie A matches.

Barcelona and Manchester City, two of the top candidates for the European Cup, start their respective campaigns against more accessible opponents before their highly anticipated clash in the group stage.

The good news for Celtic is that, despite its star power, Barcelona is beatable, as seen when recently promoted Alaves pulled off a 2-1 shocker at Camp Nou on Saturday.

The bad news is that Barcelona was playing without Lionel Messi, Andres Iniesta and Luis Suarez until the last half hour.

Expect all three back in the starting lineup.

"On Tuesday, we start the Champions League, a short competition that doesn't permit mistakes," Barcelona coach Luis Enrique said. "We have our chance to bounce back."

After a 5-1 win over fierce rival Rangers on Saturday, Celtic can look back to its win over Barcelona in the 2012 group stage.

Pep Guardiola goes into his first Champions League campaign as City manager having won all six of his games in charge.

Sergio Aguero should be recalled amid a domestic suspension, while Guardiola could rotate his fullbacks and wingers for a game against a Moenchengladbach team he'll know well from his three years in Germany with Bayern Munich.

Ancelotti was able to call upon substitutes Arturo Vidal, Douglas Costa and rising star Joshua Kimmich to make the difference against Schalke, and his squad is well-equipped for the rigors of Europe's premier competition.

The Champions League is uncharted territory for Russian runner-up Rostov, which has never before played in the group stage of a UEFA competition.

Dmitri Kirichenko's side will be counting on its defense — Rostov conceded only 20 goals in 30 games last season, a Russian league best — to keep the likes of Robert Lewandowski, Thomas Mueller and Franck Ribery at bay.

In the group's other game, 2015 runners-up Atletico Madrid and PSV Eindhoven are no strangers. Atletico needed to a penalty shootout to eliminate PSV from the round of 16 last season after both legs ended in a 0-0 stalemate. Both sides are undefeated this season.