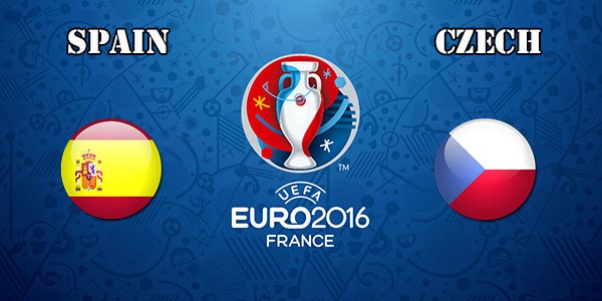 PARIS,June 13: Spain begin bid for unprecedented third straight European title as they face Czech Republic in their group D opener at Stadium De Toulouse. European Championship holders are seen as one of the favorite to lift up the trophy but their late form is questionable as they lost to comparatively weaker side Georgia in final warm up match.

The Czechs have an impressive track record at European Championships, finishing as runners-up in 1996 and losing to eventual winners Greece in the 2004 semi-finals, head coach Pavel Vrba will be looking to keep that positive Euro form when  they  meet Vicente del Bosque's side who are  unbeaten in last 12 games  in the  tournament.

Head coach Vicente del Bosque has hinted that David de Gea is likely to start in goal keeping over legendary Iker Casillas despite the controversy surrounding the Manchester United goalkeeper.
Juventus frontman Alvaro Morata is set to lead La Roja's attack, while playmaker David silva is in contention to win his 100th to be confirmed as one of Spain's greatest-ever players during the Euros.
Del Bosque could go with their traditional playig system 4-3-3 as they dont have injury issues.
Controlling the midfield with lot of ball possesion and creating goalscoring chances for attackers will be Sapain's game plan so the central midfield partnership of Busquets, Inesta and Silva could be the key for executing the tactics.

Czech Republic:
First choice defender Marek Suchy is suspended for the game against Spain so coach Vrba likely to call up veteran Michal Kadlec to fill the void. The tournament sees a return to France for Arsenal goalkeeper Petr Cech, who spent two seasons with Rennes in 2002-04, and he admitted he could not wait to get back. Captain Tomas Rosicky is set to start in attacking midfield as coach has promissed to give him free role behind the striker.

Spain are unbeaten in four games against the Czech Republic. The Czechs have scored only one goal in those four matched (netted by Jaroslav Plasil in March 2011).

Spain qualified for the 1998 World Cup at the Czechs' expense. The only goal in their two qualifiers was a penalty converted by Fernando Hierro.

The teams also met in Euro 2012 qualifying. David Villa scored twice for Spain in a 2-1 win in Granada, with Juan Mata and Xabi Alonso on target in their 2-0 away victory.

-This match is Spain and the Czech Republic's first encounter in a major tournament.

-The Czech Republic conceded 14 goals in the qualifying campaign, more than any other team to have qualified for the Euro 2016 finals.

-The Czech Republic have won seven of their last 10 games in the group stages (L3).

GENEVA, Aug 23: The richest clubs and biggest leagues in Europe are set to tighten their grip on the Champions... Read More...