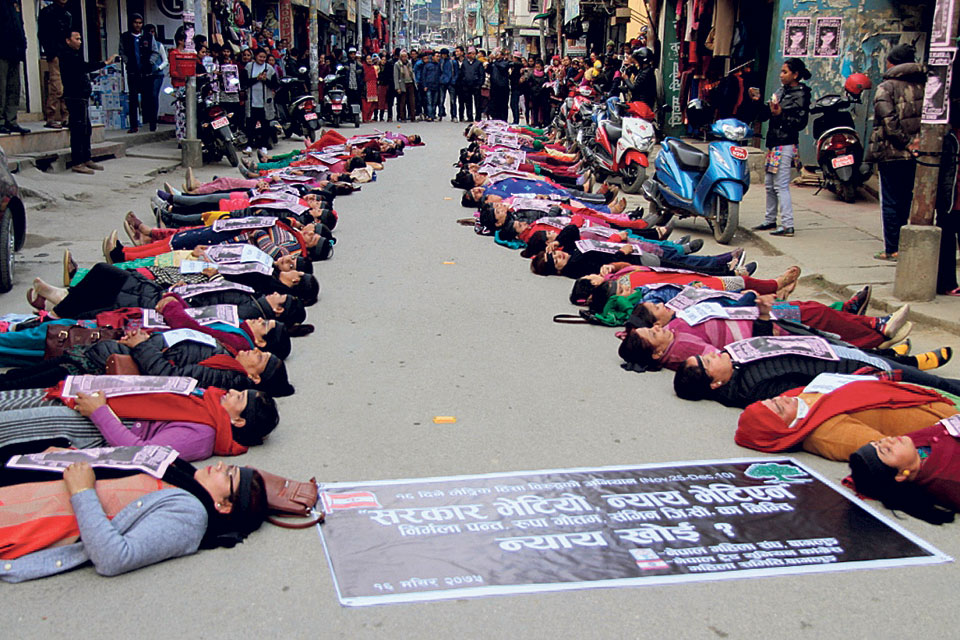 KATHMANDU, Dec 3: A group of youth has started pasting what they call ‘Nirmala stickers’ on their bags, jackets, bikes and cars in a bid to press for their demand for justice to rape and murder victim Nirmala Panta.

The youths said they adopted the unique way of protest aimed at pressing the government to deliver justice in the rape and murder case after the police, in a widely-criticized move, tore posters pasted on electricity poles and walls in the capital last week. The posters bore Nirmala’s image with the message “Government found, justice not”.

The youths claimed that they started the campaign to paste the stickers on their jackets, bags, and vehicles as a result of the police action to remove the posters serving the same cause from public places. “They tore the posters placed at the public places,” a campaigner told Republica, “But can they tear the stickers on our bags, jackets, and vehicles?”

It is the same group of protestors which had earlier pasted the posters on poles and walls in various places of the capital. They have also urged the general public to follow their lead in order to pressurize the government to deliver justice to the 13-year-old rape and murder victim Panta, whose body was found in a sugarcane field in Bhimdutta Municipality of Kanchanpur on July 27.

“It has been more than four months since Nirmala was raped and murdered. It is high time the public started mounting more pressure on the government,” added the campaigner, asking not to be named.

The government’s failure to nab the culprits has been criticized from various quarters, with people holding protests and rallies across the country, demanding justice for Nirmala. On Saturday, a peaceful civic rally marched from Maitighar Mandala to New Baneshwar in the capital, demanding justice for Nirmala and criticizing the government of its poor handling of the case.

Shattered by the hollow assurances of justice given to him by the authorities, Nirmala’s father Yagya Raj Panta has lately developed a ‘mental disorder’. Yagya Raj fell ill while staging a sit-in in his home district Kanchanpur, and was brought to Kathmandu where he is currently undergoing treatment at TU Teaching Hospital, Maharajgunj.

Murderer of Panta to be booked: Home Minister Thapa

Do not assume COVID pandemic reaching 'end game', warns WHO
49 minutes ago