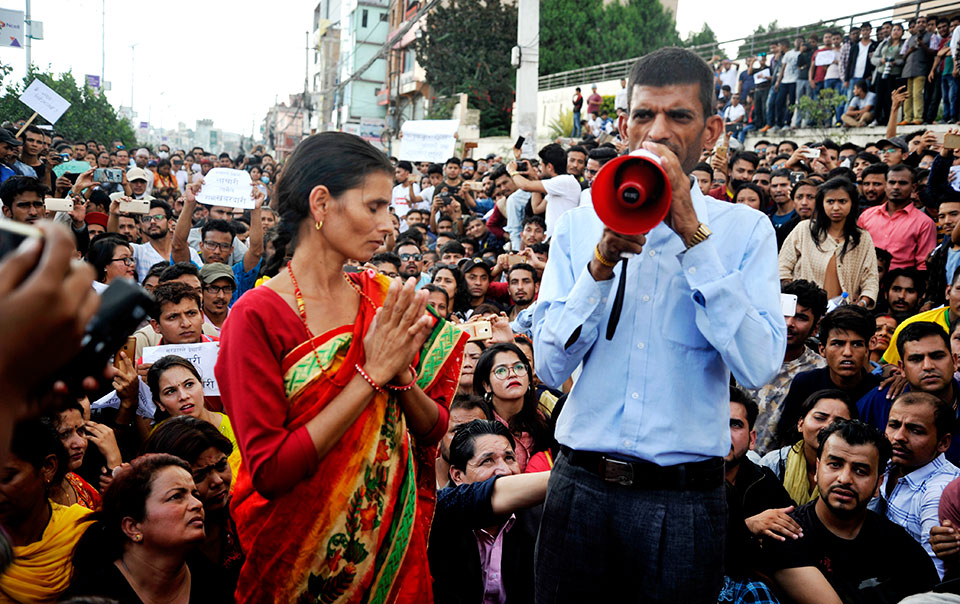 The father and mother of Nirmala Panta, who was raped and killed in Kanchanpur about two months ago, address the mass during a protest rally on Saturday demanding justice for the victim. Protests and demonstrations were organized across the country in order to pressure the government to book the culprits who raped and murdered Nirmala. Photo: Keshab Thoker/Republica

KATHMANDU, Sept 16: Thousands of civilians took to the streets in major cities across the country on Saturday to exert pressure on the government to conduct an impartial investigation in the rape and murder case of Nirmala Panta, a thirteen-year-old girl of Mahendranagar.

In Kathmandu, hundreds of civil society members including doctors, writers, journalists and human rights activists gathered at Maitighar Mandala at 1 pm to support the victim’s parents’ quest for justice.

The mass then marched through Babarmahal and Bijulibazar before convening into a mass meeting at New Baneshwar.  Writer Khagendra Sangroula, Dr Govinda KC, journalists Rishi Dhamala and Rabi Lamichhane, woman rights activist Hima Bista all took part in the rally where people from different walks of life were united in demanding justice for Nirmala.

Claiming that the rape and murder case is the most sensational criminal case Nepal has seen since the murder case of Namita and Sunita in 1980, writer Khagendra Sangroula said, “The current government claims that it is the government of the people but it has not been able to conduct a fair investigation into the case.”

Sangroula claimed that if a similar incident had occurred with the children of the higher-ups, the perpetrators would have been caught within 24 hours.

“Since the tragic incident happened to the daughter of a commoner, the perpetrators are being defended.”

Similarly, woman rights activist Hima Bista said that the government should have been more impartial in delivering justice to Nirmala.

“It has already been 52 days since Nirmala was raped and murdered,” she said, adding, “Why hasn’t justice been delivered till now?”

She also added that the rallies being organized across the nation were not held under the influence of any political party or organization but were the spontaneous reaction of the civilians.

In the rally, the protestors held placards which read “Why is the government staying silent when rape cases are increasing?”, “More than 50 days have passed, why justice is not delivered?”, “Why are innocent people tortured while culprits walk free?” and chanted the slogan of “Justice for Nirmala”.

In Pokhara, a silent protest rally walked from Manavadhikar Chowk to Mahendrapul before returning back to the starting point where the rally converged into a gathering. As the culprits of the rape and murder case could not be identified even in 52 days, the participants of the protest said that “the general public has felt that there is neither security nor justice in Nepal”.

They warned that they are ready to stage a protest wearing all black in front of Singha Durbar.

Silent protests were also staged in Damak and Kakarbhitta of Jhapa district, at Traffic Chowk of Biratnagar and in Tansen of Palpa through the initiation of social media. In Tansen, the rally started from Tundikhel and convened into a gathering at Shitalpati.

Protests were also staged in Inaruwa, Itahari and Dharan of Sunsari district. In Dharan, students of BP Koirala Institute of Health Sciences and Purbanchal Engineering College took to the streets demanding justice for the victim family while civilians took part in rallies in different parts of Itahari.

The protest rally in Chitwan included poetry recitation by local poets. The gathering where the poems were recited was held at Chaubiskothi of Bharatpur.

In Nepalgunj, the protestors wore black blindfolds symbolizing the blind nature of the government in delivering justice. In the protest staged at BP Chowk, the participants also announced a protest in front of the District Administration Office where they will blow whistles. The protest in Rolpa was accompanied by a candle lighting event. Major protests were also staged in Birat Chowk of Biratnagar, Gaighat of Udaypur and Pyuthan.