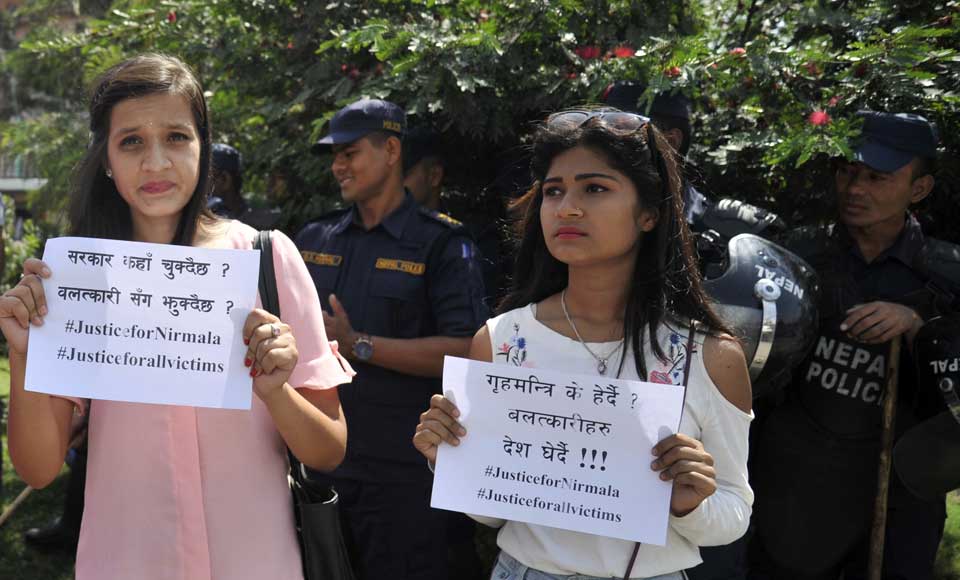 KATHMANDU, Sept 30: A group of civilians on Saturday gathered spontaneously at Maitighar Mandala to stage a protest demanding that the report of the high-level probe committee on the rape and murder case of Nirmala Panta be made public. They also demanded the government to book perpetrators immediately.

The protesters claimed that the public deserves the right to know the details of the report submitted to the Ministry of Home Affairs by the probe committee led by Director General of the Department of Prison Management, Hari Prasad Mainali.

They also accused the home ministry and the government of being careless in handling the case since neither the report has been made public nor the perpetrators identified till now.

During the protest, the demonstrators asked the government to take strong action against the rapists to discourage such incidents.

The protesters also held placards with various slogans. The placards read, 'Where is this government failing? Is it helping the rapists?', 'What is the home minister paying attention to? The nation is filled with rapists', and 'Deliver justice to Nirmala. The victims are facing injustice.'

It has been more than two months that Nirmala Panta, 13, of Bhimdutta Municipality-18, was found raped and subsequently murdered in a sugarcane field in the same municipality.

The police have come under scrutiny due to the way they handled the case, causing suspicion of their involvement is trying to protect the culprit. Dozens of rallies have been staged across the nation demanding justice for the thirteen-year-old.

Women stage sit-in for release of report on Nirmala case

KATHMANDU, Sept 16: Thousands of civilians took to the streets in major cities across the country on Saturday to exert... Read More...