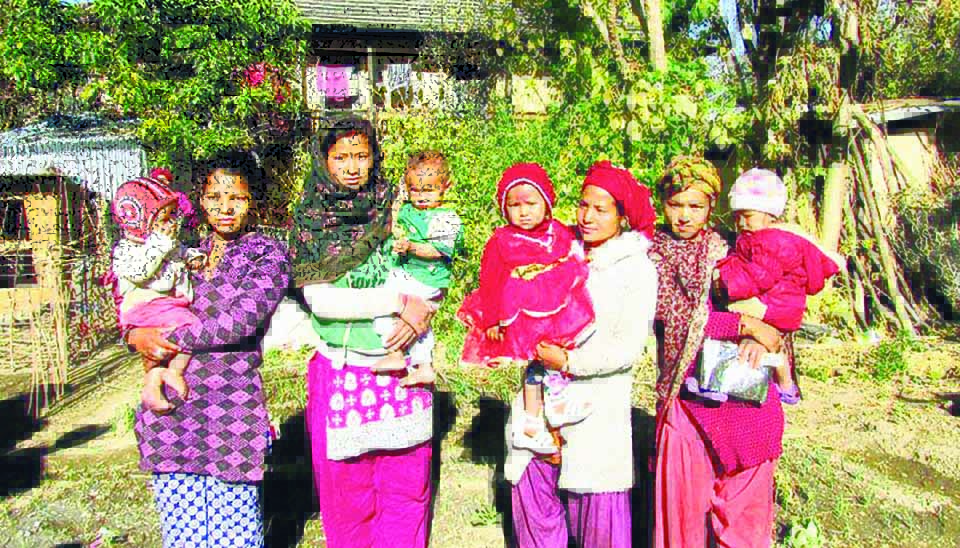 A group of mothers along with their infants stand outside a maternity clinic in Rukum district in this file photo.

ROLPA, Aug 4: Kumari BK, 28, has been living with a prolapsed uterus since the last eight years. Although she noticed the problem at the very beginning, she did visit the hospital for treatment. "I did not have the money for the checkup, so I did not visit the hospital," she said. Along with that, hesitation did not let her discuss the matter with other family members either. But these days, everyone around her knows about her condition."I cannot sit, move easily.

"They become a mother at a premature age and do not take adequate rest. Consequently, the uterus does not stay in its place. In lack of awareness, they hide the problem, and if they want to seek treatment, they cannot afford to consult a doctor."

Let nobody go through such suffering," laments the mother of two from Dhabang village. "I do not know how much I will survive in such a condition. I worry about the future of my children."BK had married when she was just 15. The next year, she gave birth to a baby girl. After four years, she had a son.

There were health complications right during the first pregnancy. However, neither she got health care, nor nutritious food for herself and the child."I had to work hard all the time. I did not take rest even when after delivering my babies," reports BK.BK's health started deteriorating right from the age of 16 due to early motherhood in one hand and the lack of rest, on the other. Doctors later told her she should not have another baby as her uterus was already not in its place due to premature pregnancy."But I had another baby soon after that, and that affected my health further," she laments. After her second baby, BK conceived for the third time, but unfortunately, she had a miscarriage. This further deteriorated her health.

According to health workers, BK's case is severe and needs a specialist's attention.

"She needs to be taken to a big hospital and get operated," said a local female health volunteer Bimala Dangi. "Her uterus has come out; it might get infected if not removed."

BK does not have a supportive family, either. Her husband is irresponsible. He drinks and creates a nuisance at home. He has started being even rude to her due to her poor health, said BK.

Heath volunteer Dangi states that BK is just one among many women in the rural villages of Rukum to suffer from a prolapsed uterus. Early motherhood and the lack of health facilities has been affecting women's health, she notes.

"They become a mother at a premature age and do not take adequate rest. Consequently, the uterus does not stay in its place. In lack of awareness, they hide the problem, and if they want to seek treatment, they cannot afford to consult a doctor," said Dangi.

Though women keep things to themselves in the early stage of a prolapsed uterus, they cannot hide it in the long run. It gets infected and starts stinking as the infection gets worse. When pus is formed and released, the situation gets out of control."Many mothers in Rolpa are living with a prolapsed uterus. It's a hellish life," said Dangi, adding that they cannot get to doctors on their own in lack of financial support. According to Dr Anil KC, a doctor at the Rolpa District Hospital, easy access to health centers, and free treatment are necessary to treat their ailments. Unless they are approached with free health care offers, the problem is not going to get solved.

"First, child marriages must be completely stopped. That will reduce the chances of early motherhood. Along with that, women with a prolapsed uterus should get treatment irrespective of their financial condition," said Dr KC.

Dr KC noted that a considerable number of women in Rolpa need medical intervention so that uterus related problems could be treated. "Due to the practice of early marriage, maximum women in this district are living with a prolapsed uterus," he said.

A few women make it to the district hospital on time. If not treated at an early stage, prolapsed uteruses have to be removed. "There is a huge number of women in Rolpa who require surgery for a prolapsed uterus. We do not have exact data on this, but we can fairly say that it is a problem of almost every home," said Dr KC.