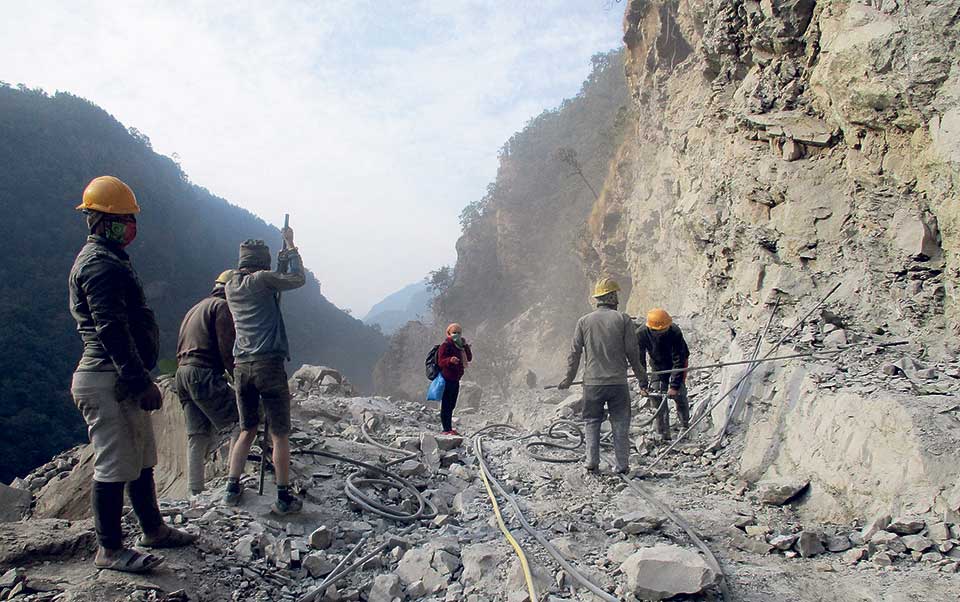 Nepal Army personnel constructing a road that will connect northern parts of the Gorkha district with its headquarters, in this recent picture. Photo: Narhari Sapkota/Republica

GORKHA, Feb 8: Chumnubri Rural Municipality in northern part of Gorkha district bordering Tibet remains isolated from the rest of the district in lack of road networks. Despite repeated calls, locals had failed to draw attention of the government in the past. In case of medical or any other emergency visit, the only option for the residents was to charter a helicopter, which would be not affordable for most of them. However, this is going to change very soon as Nepal Army is constructing road that would connect the area to other parts of the district and nation.

“This is great news for us. Roads will make our future prosper as it will open our doors to all forms of development” chairperson of the rural municipality, Dhan Bahadur Gurung said. “Our miseries in lack of road have been inexpressible. Now, this is going to change.”

The rural municipality is home to around 100 households. They use mules as the form of local transportation. However, for distant journeys using mules is difficult. As a result, their movement is quite limited. According to Gurung, residents in his municipality have remained poor just because they are not connected to roads.

“This is considered the remotest area in Gorkha and because of that we are deprived of even the basic facilities. When your place is not connected to roads, how can you imagine having any other form of development?” he stated.

The Nepal Army is presently constructing 121 kilometers road from Benighat to Lakre Bhanjyang. Rest of the total of 183 kilometers long road will be built by the Department of Roads.

Even though the project had kicked off two years ago, it could not take momentum due to challenging topography. As a result, it failed to make headway. Later on, the Nepal Army was handed over the responsibility. As soon as the army got in the scene, visible progress has been seen and this has elated the stakeholders, who now hope that the road will complete very soon.

“Nepal Army has taken over the responsibility to build road for us through the difficult mountains. They have constructed roads even in very tough topographical conditions in other districts. We are confident that they will bring the road to shape very soon,” said Gurung.

The section of the road, which has been given to the Nepal Army, comprises of rocky mountains. However, the stretch of the road between Behighat to Hawadanda, is relatively easier and this section will be taken care of by the Department of Roads.

“We used to go to the district headquarters by foot. We walked for several days to reach there. Now, we are assured that such days are going to be over very soon,” said Gurung. “Long halted project has gained pace.”

The army has already opened 13 kilometers of the road. They have been blasting rocks using explosives, almost every day. According to Major of Nepal Army Nishant Chhetri, vehicles have begun to ply on the newly opened track.
“The work is going on in full swing. We have opened 13 kilometers of the track on which some vehicles have started to ply,” he said.

Chhetri said that the team has been facing some technical difficulties but assured that they will meet their target. “At most of the points, we have been blasting off the mountains and rocks. That is going on smoothly. But areas where there is risk of landslides, we are working cautiously,” he said adding that they are yet to survey some of the areas.

Nepal Army has taken over the responsibility to build road for us through the difficult mountains. They have constructed roads even in very tough topographical conditions in other districts. We are confident that they will bring the road to shape very soon.

He shared that the army will construct a two-lane road that will touch Manaslu area. After the survey of the route from Hawadanda to Tatopani is completed the construction will speed up, he said. He further stated that around 100 army personals are currently working on the site.

“About 100 of us are deputed in the field to work on this road. It is tough and sometimes very challenging. But that is the reason, it was entrusted to us,” he further said.

Meanwhile a local of Kerauja, Deepak Gurung expressed sheer excitement over the progress made. Even the tourism sector is already reaping benefits, he said.
“The army is opening the track at a great speed. We have already begun to feel it easier to travel around. Life has become easier,” he said. He further shared that tourism entrepreneurs and trekkers are also equally elated with the progress.

“Most of the tourists, trekking to Manaslu go through this way. The road will help to bring in more tourists here. This will directly create more employment opportunities here,” he said.

KATHMANDU, July 6:Growing pollution in the Narayani River at Gaindakot Municipality of Nawalparasi East has made the locals to call for... Read More...

SANKHUWASABHA, Jan 26: Locals have been elated over the speedy construction of a road from Sankhuwasabha's commercial hub, Bazaar Pokhari,... Read More...