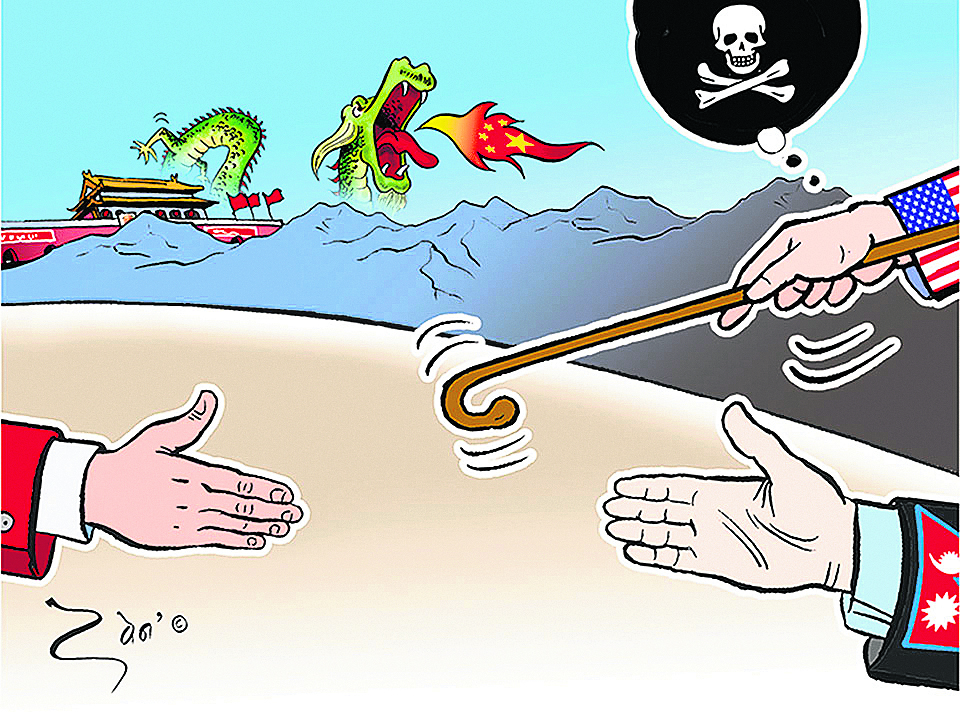 If Nepal ignores its next-door neighbors, the consequences may be stark. Ignoring the West may also be costly for Nepal’s development endeavors

The very idea of ‘non-alignment’ in foreign policy is neither practical nor doable. Yet, many countries adopted it in the past and still do so, at least in theory. The sea changes in the world politics, over the years, particularly in the sector of political economy, has made many ‘ideas’ redundant—‘non-alignment’ being one of them. Thus the current situation demands more pragmatic approach but countries like Nepal still revere it as a mantra for conducting foreign policy.

Nepal’s commitment to ‘non-alignment’, today, is facing litmus test with the emergence of two major initiatives which have come in the form of China’s Belt and Road Initiative (BRI) and America’s Indo-Pacific Strategy (IPS).  Countries like Nepal, are in a state of dilemma as how to sail in the murky water filled with ‘old power—the US—and ‘new’ emerging powers—India and China. It is worthwhile to mention that Russia, the yesteryear super-power, has also revived itself and expanding its sphere of influence everywhere including in South Asia. This has created a geopolitical momentum in South Asia never seen in the past. This article looks into the interplay among China, India, and the US—the main actors in the geopolitical struggle—in the background of recent projects, BRI and IPS, which is likely to impact Nepal’s international relations in the days to come.

Competing Asian powers
China and India—two re-emerging powers—have made great economic strides during the last two decades. Of the two, it is China, which has received wider attention as it has successfully uplifted a significant mass of people out of poverty, which it calls its own model of governance. China’s rise as an economic dragon and aspiration to create its own world order through a trillion-dollar Belt and Road Initiative (BRI) has kept the world mesmerized for quite a while. India, too, is trying to reinforce its sphere of influence in South Asia and beyond. Taken together, their rise certainly has increased confidence levels of many states of Asia and Africa—who otherwise looked up to the West for both development and democracy.

China’s BRI and the subsequent US response to it in form of IPS have put states like Nepal in a conundrum. Since both China and the US are heavily engaged in Nepal, India has also scaled up its rail, road, and pipeline projects, which earlier remained in the backburner, connecting southern region of Nepal to Kathmandu.

With regard to China, not only visits but also investment from China has increased in Nepal. For the last four consecutive years, China, in fact, has become the largest investor in Nepal and is consolidating its foothold through its soft power to stimulate the interactions altogether missing so far at the people’s level. In recent times, China, for instance, has established sizeable numbers of Confucius centers in various parts of Nepal. There are more flights operating between Nepal and China than between Nepal and India. What is interesting is China seems to have become more vocal in Nepal’s political affairs, particularly after the abolition of monarchy in 2008, which was never the case in the past. If we look into the political incidents in Kathmandu, we can clearly notice Sinicization of Nepal’s politics underway. All put together, China certainly is trying to project its ‘exceptionalism’ through its economic might.

The recent elevation of the relationship to the ‘strategic level’ will add further dimension to it. China has already increased its interaction with Nepal Army. It seems China trusts Nepal Army more than the political parties and their leaders as the latter keep on changing the post. The joint military exercise between Nepal Army and People’s Liberation Army and technical and financial assistance former is receiving will create its own sphere of influence. In the absence of a reliable political partner other than the state bearing institutions like Nepal Army, China wants to reach out to the people directly and for that, it is penetrating deep down into society. It appears that China will not have to ally with one actor to advance its interests. In contrast, it will develop multiple alliances, which it has already done to a great extent, at various layers of society in the days to come.

On the contrary, ‘interactions’ with India on ‘development and governance issues’ have gone down. It is Hinduism—a common religion—and the culture between India and Nepal, which remains a strong bond to keep the relations intact. However, there are also many challenges in the store. Also, cultural and religious ties are losing the momentum as both believe more in ‘secularism’ than the ‘dharma’. India’s support is often held under deep mistrust may be because of its dillydallying in the projects and its unwillingness to sort out differences on border related issues such as Kalapani and Susta.

The same is not really true for China because there are lesser differences due to low-level of interactions. We do not yet know how Nepal’s relations with China will look like when the interactions at the multiple level increase in the days to come. However, as of now, the established ‘belief’ with some sections of society is that China does no wrong. Whatever the cases, the strength of India’s influence vis-à-vis other powers is dwindling in Nepal which certainly is not good for both the countries. India, however, has limited choices: It cannot ignore Nepal, nor can it put it under ‘undue’ pressure.

The Western gaze
Likewise, Nepal, too, has become an important country for the Western power(s) in recent times. The US has come up with a proposal similar to that of BRI for infrastructural development of Nepal. The announcement of US$500 million Millennium Challenge Cooperation (MCC) compact is a case in point. The US even wants Nepal to become a major actor in its Indo-Pacific Strategy (IPS) floated by the Donald Trump administration last year. But America’s offer to Nepal to become a part of IPS is hardly to the liking of its neighbors. Neither China nor India would like to see Nepal tagging along the US line despite the fact that India is a member-state of that strategy. The Sino-American rivalry followed by India is well reflected in Nepal and it would increase in the days come.

Taken together, while their engagements in Nepal might have a potential of creating opportunities, they have also unleashed implications of critical geopolitical salience, particularly for Nepal. Now, that regional powers are competing fiercely to influence the smaller states and rally them to support their rise, chances are that it will unleash problems not only for Nepal but also in the whole South Asian region. Their competitions, anchored through various forms, have resulted in a situation close to what the realists call as ‘prisoner’s dilemma.’ Under these circumstances, smaller states are undecided as to with whom to align. We should bear in mind that ‘strings’ are always attached with the assistance coming not only from the ‘states’ but also from the inter-governmental organizations.

Strike a balance
Nepal can neither totally ignore nor actively participate in various strategic approaches adopted by the immediate and the distant neighbors. The US and the West have been Nepal’s partners in its development for nearly 70 years. China and India are its immediate neighbors with whom it shares close cultural and civilizational ties and day-to-day interactions.  If Nepal ignores its next-door neighbors, the consequences may be stark even if not very immediately. Ignoring the West may also be costly for Nepal’s development endeavors. It can also leave an unwholesome impact on the interactions now initiated at the people-to-people level due to the high-level of migration for employment and otherwise. Nepal should prudently strike a fine balance between its fast rising neighbors and others rather than becoming a launching pad for power(s).

The author teaches and writes on political economy

KATHMANDU, June 29: Inaugurating the national dialogue on foreign policy organized by Ministry of Foreign Affairs on Saturday in the... Read More...

Minister Baskota forced to resign in bribe scandal
3 hours ago

I resigned on moral grounds: Gokul Baskota
19 hours ago