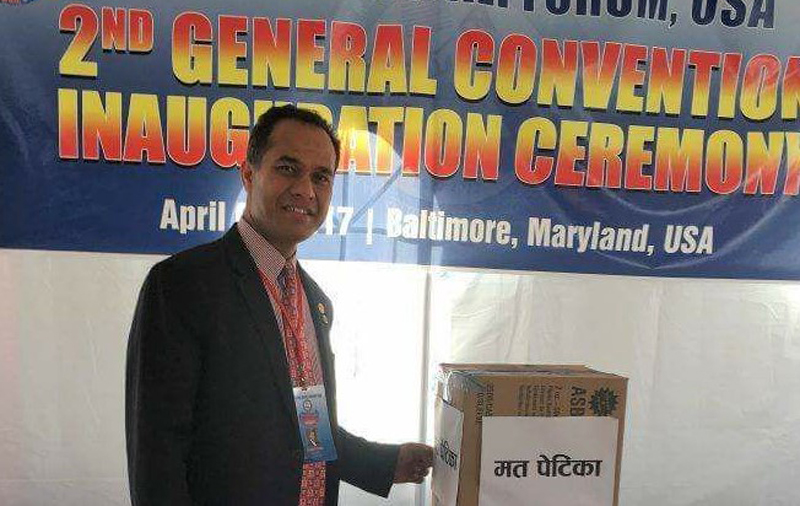 Thapa is the denizen of Meryland State in the USA.

In the election held on Sunday, Thapa was elected chairman by defeating Janak Rana of Texas
State. Thapa had secured 85 votes against Rana’s 56.

Thapa was General Secretary of the then working committee of the Manch. Rana was the founder member of the Prawasi Manch, USA.

Manch is the association of the Nepali Diaspora in the USA. CPN-UML Central Committee Member Prithvi Subba Gurung had inaugurated the program.

Similarly, Tek Gurung of New York was elected senior vice chairman of the Manch by defeating his closest rival Pritisagar Khatri of Kentuky.

Gurung had secured 77 votes while Khatri got 64 votes.

Radhakrishna Deuja of New York was elected General Secretary with 76 votes. His closest rival Shankar Pant of Texas got 63 votes.

Even though Thapa was elected chairman of the Manch, Tek Gurung was elected senior vice chairman from the Rana panel. There is a mixed elections result.

Most of the office bearers including general secretary were elected from Thapa panel.

The election could not be held unanimoulsy despite efforts by the leaders who reached the USA to conduct the elections.

Ultimately, the shadow of the faction in the CPN-UML Central Committee was reflected in the elections of the Manch.

In the inauguration held on Saturday, UML leaders Yubaraj Karki, and Khagaraj Adhikari were present as guests.   Karki is the in-charge of the UML USA chapter.