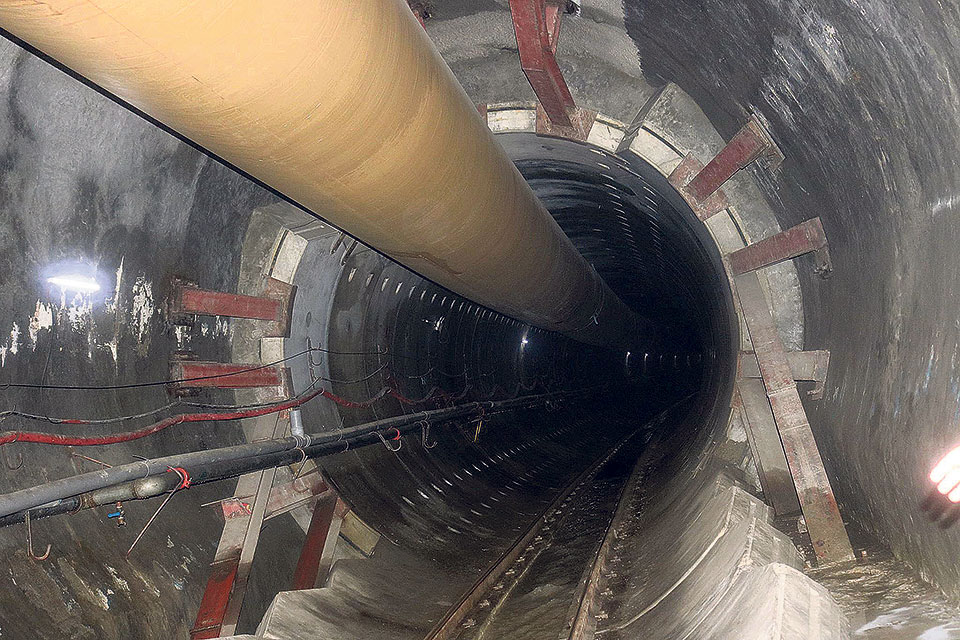 SURKHET, Aug 22: The much talked-about Bheri Babai Multipurpose Project looks quite in a sorry state. Project officials themselves express doubt over the timely completion of the project as the construction of the dam and powerhouse has not kicked off till date. The only component of the project that is on time is its tunnel. Almost 60 percent of the tunnel has been dug so far.

“Regarding the tunnel, there is no doubt that it would be completed on time. Actually we are ahead of time regarding its construction. We are going to finish it nine or ten months before the slated time,” said the project chief, Shiva Kumar Basnet. “But in terms of other project components we are slow,” he added.

The project deadline is set to March 2020. Since the last one decade, the government has been invested around one billion rupees in the project. According to Basnet, there is guarantee completing the construction of the tunnel, but little can be said about meeting deadline for other components of the project.

Digging the tunnel was an exciting experience for the project as it used a tunnel boring machine (TBM) for the first in the country. Reportedly, all risk zones of the tunnel have been dug and digging the remaining 40 percent of the tunnel is expected to be smooth. The tunnel will be used to divert water from Bheri to Babai River to facilitate irrigation in Banke and Bardiya districts and to generate electricity.

“The tunnel was indeed a difficult part. There were very fragile points. But we have almost crossed the risk zone and digging the rest of the tunnel is expected to be smoother,” Basnet reiterated.

However, construction of a dam along the Bheri River and a powerhouse in the Babai River, which are major components of the project, lag behind. According to the Department of Irrigation (DoI), the dam is scheduled to be constructed in the first phase and the powerhouse in the second phase.

According to Basnet, detailed project report (DPR) of both components has been handed over to the department, but that has not yet been certified. He informed that after getting approval from the department, there are formalities and procedures to complete, before starting the construction.

“After the project is approved, a global tender would be issued inviting bids from potential construction companies for constructing the project,” Basnet said. “Presently, we are waiting for the DoI’s approval of the DPR,” he informed.

Even if the DPR is approved right away, meeting the deadline to complete the project is not likely. Basent states that construction of the dam and powerhouse could start from the next fiscal year if the DPR is accepted right now. “Tender process takes time,” he said while trying to explain the delay.

“The tunneling technology used in digging the project’s tunnel is the first of its kind in Nepal. It was very risky to dig tunnel using conventional methods due to the topography. However, now we can heave a sigh of relief that work so far has gone well and the risk zone is almost over,” he stated.

“Now, we are going to speed up the work for constructing the dam and the powerhouse,” he informed.

Apart from the delays in studying and approving the DPR, there are other issues as well, which can further delay the project. The project has so far not made decision on compensation rate that will be provided to the families who will be affected by the project.

Acquisition of land for the project and reaching an understanding with the people who will be affected has always been a problem in almost all kinds of developmental projects in the country. Pokhara International Airport had to face long delays because of lack of consensus among the project officials and the affected families. Similarly, locals had taken to streets protesting lack of ‘reasonable compensation’ to them in the case of Gautam Buddha International airport. Similarly, road-widening projects are often affected because of the same issue.

“We are yet to take decision on the compensation to be provided to families who will be affected by the project,” Pandit said. “Hopefully it will be done soon.”

Around 30 ropanis of private land is expected to be required for the project. The government generally tries to pay the affected families as per its own land rates, which are generally lower than market rates. As such, landowners hardly come to an agreement with the government.  Despite the apparent expected delays, Pandit stated that the project would complete on deadline

DOTI, March 2: Several development initiatives have remained stagnant in dozens of villages in Doti for no headways in the... Read More...

Project starts construction but yet to decide over land acquisition

SURKHET, Aug 27: After the construction of a dam on Bheri River in Chiple under the Bheri Babai Multipurpose Project gets... Read More...