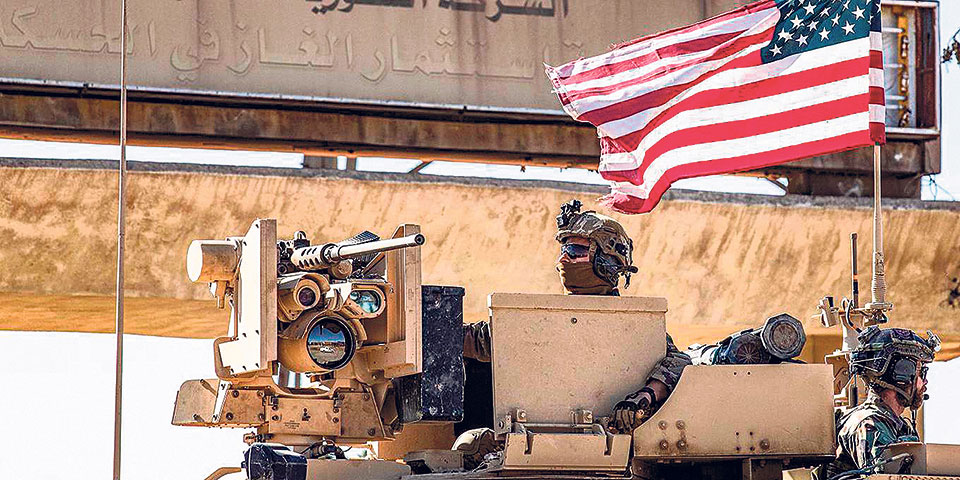 NEW YORK – It was August 5, 1990, just days after Saddam Hussein’s Iraq had invaded and conquered all of Kuwait, and US President George H.W. Bush could not have been clearer as he spoke from the South Lawn at the White House: “This will not stand, this aggression against Kuwait.” Over the next six months, Bush proved to be a man of his word, as the United States sent a half-million soldiers to the Middle East and led an international coalition that liberated Kuwait.

Three decades later, a very different American president embraced a very different US policy. In the wake of abandoning its Kurdish partners in Syria who had fought valiantly in defeating Islamic State (ISIS) terrorists, the US stood by as Iranian drones and missiles attacked Saudi Arabian oil installations, temporarily taking half of its capacity offline.

Welcome to the post-American Middle East. To be fair, the phrase is something of an exaggeration, as the US has not withdrawn from the region. In fact, it has recently sent additional troops to deter and, if necessary, help defend Saudi Arabia from future Iranian attacks and possibly respond directly to them. But there is no getting around the fundamental truth that the US has reduced both its presence and role in a region that it has dominated for nearly a half-century.

The roots of this trend date back to President George W Bush, whose decision to launch an ill-advised and poorly designed war of choice against Iraq proved to be a turning point in US foreign policy. The high costs and poor results of that war turned the American public against military involvement in the region, which influenced President Barack Obama as he chose not to follow through on his warnings to Syria’s government that use of chemical weapons would cross a “red line” and trigger grave consequences. Obama also decided not to follow up the NATO-led intervention in Libya that removed Muammar al-Qaddafi’s regime but left behind a divided country and a failed state.

President Donald Trump shares this aversion to military involvement in the region. In addition, increased domestic production of oil and gas has diminished the direct importance of the Middle East to the US. Moreover, renewed great power rivalry has increased the need for the US to shift resources and attention to Europe to counter Russia, and to Asia to offset China.

The Trump administration has distanced itself from the Middle East in myriad ways beyond demonstrating a reluctance to use military force or station soldiers in conflict zones. Diplomacy is largely absent. Trump has chosen to ignore human-rights violations in Saudi Arabia and Egypt, and his administration has not made any serious effort to resolve the Israeli-Palestinian conflict.

The greatest source of uncertainty in the region involves Iran. The Trump administration unilaterally withdrew from the 2015 nuclear agreement, despite Iran’s compliance with it. The administration then introduced a policy of “maximum pressure,” consisting mainly of severe economic sanctions, which are having a demonstrable impact on Iran’s economy—by some estimates causing its GDP to shrink by nearly 10 percent this past year.

But if the impact of the sanctions is apparent, their purpose is not. What is clear is that Iran will respond to America’s economic warfare with warfare of its own. In addition to Saudi oil installations, Iran has already attacked tanker traffic moving through the region, and is gradually breaking out of the constraints set by the 2015 nuclear deal. As the economic pressure on the regime intensifies, the US and its allies should expect additional Iranian responses.

This presents the Trump administration with a dilemma. Its unstated but apparent preference is for regime change in Tehran, but 40 years after the Iranian revolution, the regime remains resilient, despite public protests. Responding militarily to Iranian actions could lead to just the sort of conflict Trump does not want in the run-up to the 2020 US presidential election. But allowing Iran to free itself from the limits of the 2015 nuclear accord increases the odds that Israel will attack Iran, dragging the US into war. And even if that does not happen, US inaction might lead one or more of Iran’s neighbors to acquire nuclear weapons to balance Iranian capabilities and the possibility that the US withdraws further from the region. Such a development in what is already the world’s most unstable region would be a nightmare.

The best way forward would be for the US to articulate what policy changes it wants from Iran regarding its nuclear and missile programs, as well as its behavior throughout the region, and what it is prepared to offer in return. Such a policy should be announced in public, thereby forcing the regime to explain to its frustrated citizens why it is turning down much-desired sanctions relief in order to continue its destabilizing activities in the region and its nuclear and missile programs. In the face of intense economic and political pressure, the regime just might agree to negotiate, much as it did when it agreed to end its decade-long war with its then-arch-enemy Iraq. Thus far, though, no such US initiative has been forthcoming.

In short, the Trump administration is learning that pulling back from the Middle East is neither easy nor without risks and costs. The US still has a stake in fighting terrorism, resisting nuclear proliferation, supporting the free flow of oil, and promoting the security of Israel and American partners in the Arab world. What is needed is clear: greater US readiness to use limited military force, if necessary, and a willingness to pair sanctions with diplomacy. What is less clear is whether such a policy mix can be expected any time soon.

Richard N. Haass is President of the Council on Foreign Relations and author of A World in Disarray.
© 2019, Project Syndicate
www.project-syndicate.org

WASHINGTON, Sept 9: The United States military on Wednesday announced that it would be reducing its presence in Iraq from... Read More...

The United States told the United Nations that the killing of Iranian commander Qasem Soleimani was in self-defence and vowed... Read More...