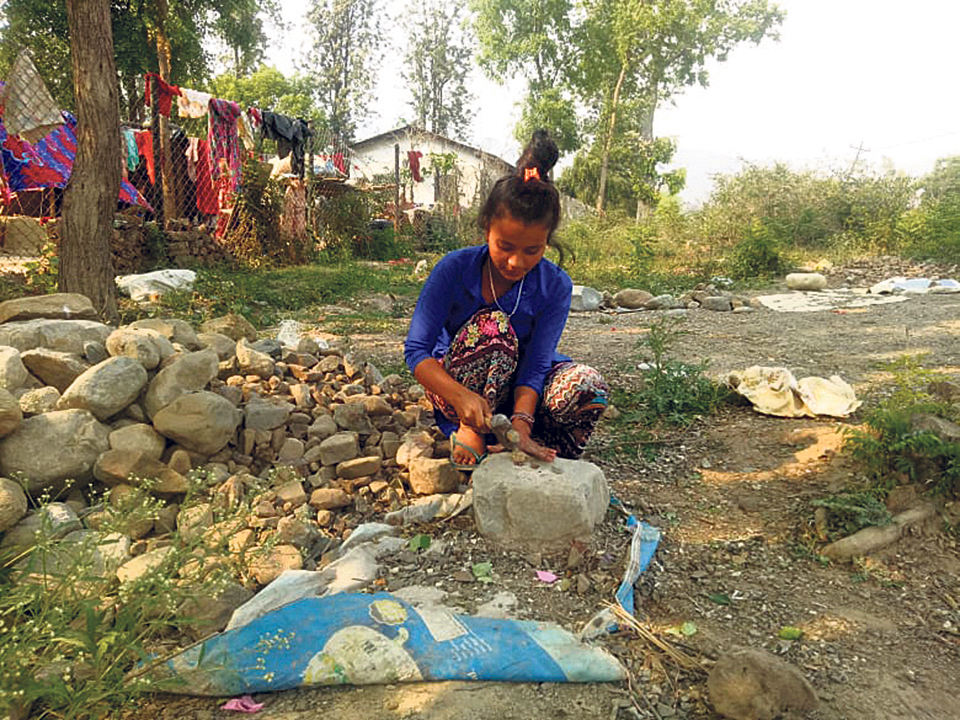 Deepa Shahi, who has been living in a makeshift hut with her parents in camps for flood victims in Birendranagar, does not go to school. Photo Courtesy: Jagatdal Bk

BIRENDRANAGAR, Sept 21: There is a school in front of the house of 10-year-old Samjhana Sunar in Khatigaira village of Dailekh. She keenly watches children go to the school and return back every day. When they play in the ground, she also feels the thrill. But attending the school is a distant dream for her.

“I want to go to school too. But I am not that fortunate,” she laments.

Samjhana does not know that it is her fundamental right to attend school. A happy childhood of every Nepali child has been ensured in the constitution. But neither Samjhana, nor her parents, who suffer from hearing impairment, have any idea about the provision. When asked why she is not in school, the family shies away from answering.

“We are too poor to manage school fees,” Samjhana answers in a faint voice, hesitantly.

Her sister Sanju does not have the experience of attending school either. And she takes it equally normally. “Our parents cannot speak or hear. We are poor and we cannot afford to study like others,” she said.

Srijana Luhar of Adanchuli village of Humla has no better story to tell. Her parents never told her that going to school is important. “My parents do not think it is important,” she said.

According to the government data, a total of 316,058 students have been enrolled in schools in Karnali Province. The provincial directorate of education states that 82,391 of them are from the Dalit community. While there is no exact data of how many children are out of school, the directorate reports that ‘children from poor families drop out midway.’

Officials at the directorate elaborate that girls from poor families are worst affected in pursuing their dream of education. If a family can afford education of one out of two children, the male child is preferred and the female is deprived of the opportunity. But the office does not have the exact data on how many girls in Karnali do not go to school.

“Gender discrimination is very deeply rooted in Karnali. Despite big slogans that girls should be educated on par with boys, few families believe in this kind of equality,” says Balbir Sunar, spokesperson of the directorate. “Due to the lack of awareness and also due to poverty, girls are deprived of education,” he added.

According to Balbir, well-off families are found to send boys to residential schools in towns and cities. But in case of daughters, they are not that enthusiastic. “Even if the families are poor, they try to admit their sons to boarding school or English-medium school. While it comes to daughters, they either send them to community schools or just keep them at home,” he added.

According to Narayan Prasad Bhattarai, president of Karnali Foundation, not all children in Karnali go to school. When families are marginalized and poor, children are least likely to get admitted to school.

“Even if they join school, they are hardly regular in classes,” he said, adding that girls feel the brunt of poverty as their families give priority to boys.

Talking about this issue, a youth leader in the district Krishna Hamal stated that girls and women are still considered just as ‘a tool for reproduction’. “In this region, people are extremely conservative. They do not understand the concept of equality. Women and girls are largely treated as tools to reproduce,” she remarked. “There are many families who will go on having a number of daughters in the expectation of having a son. And daughters are not sent to school while the son is pampered and sent to an expensive one,” she added.

She urged the local, provincial and the federal governments to take serious steps to bring girls to school. Unless and until attractive incentives are given to poor families, they will not be encouraged to change the practice, she noted.