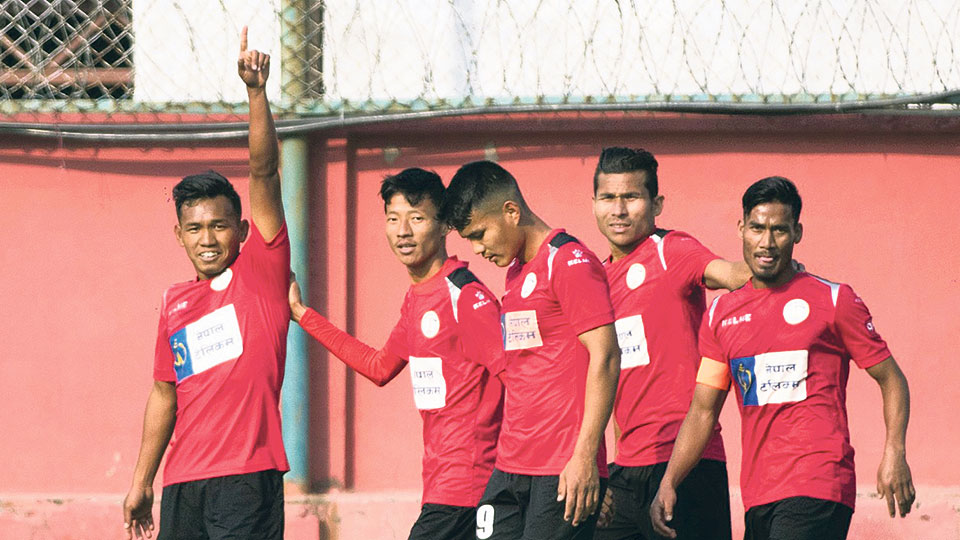 KATHMANDU, Feb 8: Three Star Club and Nepal Police Club registered 1-0 wins on Friday to move into the top five in the ongoing Martyr’s Memorial A-Division League in Lalitpur on Friday.

Three Star got past a tough challenge from Sankata Club as center back Ananta Tamang scored his third goal of the season as the team moved into third ahead of holder Manang Marshyangdi Club, which has a game in hand.

Likewise, Police saw off Brigade Boys Club with the same score line as forward Bharat Shah scored a first half goal to help his team climb to the fifth position and go two points clear of  Sankata, Jawalakhel Youth Club and New Road Team, the latter two have a game in hand.

In the early kick-off played at the All Nepal Football Association (ANFA) Complex in Satdobato, Three Star was lucky to get away with a win as Sankata dominated the possession, had more shots and shots on target and looked better with its passing. The only goal scored by Tamang was all but enough to secure the sixth win for Three Star.

However, Three Star got the first real chance of the game in the 12th minute as a header from inside the box from Sanjog Rai went just off target.

Sankata fastened up its attacking gear after that and created a chance, but could not utilize it. Ajayi Martins got a good chance to head the ball into the net, but his effort was off target in the 17th minute.

Amit Tamang produced a good header into the box looking for Dipesh Ale Magar, but his header from inside the box went over the bar in the 25th minute.

Both the teams played with good attacking tactics creating chances after another, but could not provide suitable threat to either of the goalkeepers.

Three Star got another chance through Ashok Khawas as his right-footed shot from right side of the box grazed over the crossbar in the 27th minute.

The winning team was back with good chance just four minutes later as a cross from Ashok Khawas was headed by Lal Rammawia, but the ball went off target.

Sankata got two back to back chances in the space of two minutes as Massouke Oloumou carried the ball forward and dribbled well. But, his cross inside the box was cleared by a Three Star defender and went out for a corner in the 38th minute.

Laxman Ruchal got another chance, but his shot from outside the box went wide.

Martins was so close to get the first goal of the game for Sankata, but his strong header was cleared from the goal line by Three Star captain Bikram Lama, who was awarded the man of the match for his good defensive display.

Massouke displayed the same type of attacking threat in the second half as he did in the first as he dribbled the ball past two Three Star defenders, but his shot from outside the box was saved by keeper Guillaume Yves Priso Njanga at the near post in the 49th minute.

Rammawia got two chances in just a space of a minute, but could not score a goal. He had a heading chance in the 52nd minute, but the ball went over the bar, while his shot from outside the box was way over the bar.

Mikchhen Tamang had a chance to score for Three Star as well, but his shot from outside the box was saved by Sankata keeper Binaya Shrestha in the 54th minute.

Mikchhen hit another shot six minutes later, but it was saved by keeper Shrestha again.

Then, Three Star got its goal as Ananta got a chance to hit a shot from inside the box following a corner and the ball hit a Sankata defender and went in the 61st minute.

Sanjog had a chance to double the lead in the 70th minute, but his effort flew over the crossbar.

With the win, Three Star goes third with 20 points, one ahead of Manang. It has won six matches, drawn two and lost three so far. Likewise, Sankata is sixth with 15 points consisting of four wins, three draws and four losses.

In the late-kick off, Bharat Shah scored the only goal of the game in the 29th minute to give Police its second 1-0 win in its last three games.

Captain Shah headed the ball superbly into the net after a superb corner from Nir Kumar Rai.

With the win, Police climbs fifth and has 17 points with five wins, two draws and four losses. Likewise, Brigade still stays 11th with 11 points from two wins, two draws and seven losses. It is just four points off the relegation zone with two games to go.

On Saturday, Manang will hope to get back to winning ways after a shocking 2-0 loss to Chyasal Youth Club, as it faces a strong New Road Team. With a win, Manang will climb third again and will be four points off leader Tribhuvan Army Club and three off Machhindra.

Differences between the couple after engagement
37 minutes ago