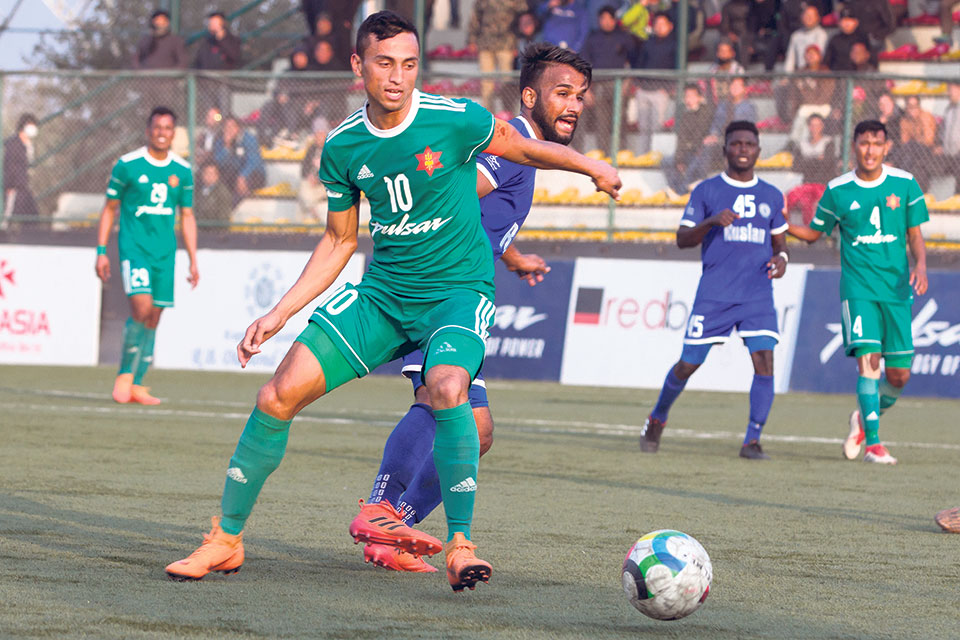 At the All Nepal Football Association (ANFA) at Satdobato, both the teams struggled to find the net until the 70th minute of the match, but Karki’s equalizer in the fourth minute of the second half injury time settled the game for a 1-1 draw.

Despite creating glorious chances to keep Army under pressure, Three Star was unable the find the net in the first half. Three Star’s Ajayi Martins got a chance to score in the 16th minute, but his flick went just wide of the target. Just two minutes after that, Santosh Tamang hit a shot just outside the penalty box, but his fierce shot went over the bar.

Three Star’s Mikchhen Tamang hit a free-kick in the 33rd minute, but his set-piece was brilliantly saved by Army keeper Bikesh Kuthu. On the other end, Army captain Nawayug Shrestha passed the ball to Santosh, but his shot that was going for the second bar, went just wide in the 38th minute.

Shrestha replaced the first choice captain Bharat Khawas, as the latter was serving a suspension due to two yellow cards in the league.

Both the teams were in attacking mode in the second half as both of them were looking for a win to keep in touch with Manang Marshyangdi Club. Both Army and Three Star have lost a game once.

Three Star took the lead in the 70th minute as Nirajan Khadka scored in a counter attack. Peter Segun provided a long pass to Martins, who gave a headed pass to Khadka. Khadka hit a right footed shot from the center of the box to score for Three Star.

Three Star got another chance to equalize late on in the game as Anil Gurung beat the keeper in the 87th minute, but his shot hit the post.

Army’s Karki then equalized in the fourth minute of the injury time from a free-kick.

After the result, Three Star is third with 22 points, five points behind leader Manang and two behind second-placed Sankata Club. Army is at the fourth place with 18 points.

In the other match played earlier on the same day, Abhishek Rijal’s late goal in the 75th minute helped Police salvage a point in a 1-1 draw against struggling Brigade Boys Club.

Hritik Khadka scored an early goal in the first half to give Police the lead, but Rijal’s strike cut the lead settling the game in a draw.

Hritik Khadka gave Brigade Boys the lead in the fifth minute of the match as he took the pass from Kazeem Adegoke Busari, rounded the ball round the keeper and beat him to score the first goal for the struggling team.

The goal from Brigade sent a wake-up call to Police and the departmental team started playing attacking football creating many chances throughout the game. But, most of its chances were either heroically cleared by the defense line, or saved by Brigade keeper Sagar Raya.

Police then started threading the ball through the flanks causing problems for the Brigade defense line, with Brigade struggling to attack with intent as it did to score its first goal in the game.

Police’s Ajit Bhandari gave a whipping cross to Dinesh Rajbanshj, whose header looked like going inside the post, but a brilliant headed clearance by Brigade defender Sujit Bhandari kept its team’s lead intact in the 21st minute.

Police kept on trying to get the goal back, but could not capitalize on its big attacking thrust, seeing Brigade clear the ball to safety. The midfield was used more from that time, with midfield duo of Hem Tamang and Tej Tamang contributing its attacks from the center of the midfield.

Hem was also named the man-of-the-match, but even though the midfielder did not score, he kept on providing stability in the midfield and the defense for Police. His combination with Tej was largely helpful in Police’s attacks, the team could not find a way through in the first half.

Ravi Paswan hit a shot in the first minute of the first half injury time which beat keeper Raya, but the slow ball lancing towards the goal was cleared from the goal-line by Randip Poudel.

Police was left frustrated with the defensive display from Brigade, but it finally got a way through in the last 15 minutes of the match. Rajbanshi crossed the ball into the box, which was headed in by Rijal to pull the game back on track in the 75th minute.

Police missed chance to take the lead just a minute after that as Paswan’s shot was spilled away by keeper Raya, but Rijal failed to score the rebound.

Rijal had another chance to score again, but his shot in the second half injury time after a Paswan pass, was saved again by the Brigade keeper.

After the result, Police is at the fifth place with 15 points, while Brigade is languishing at the 11th place with five points. 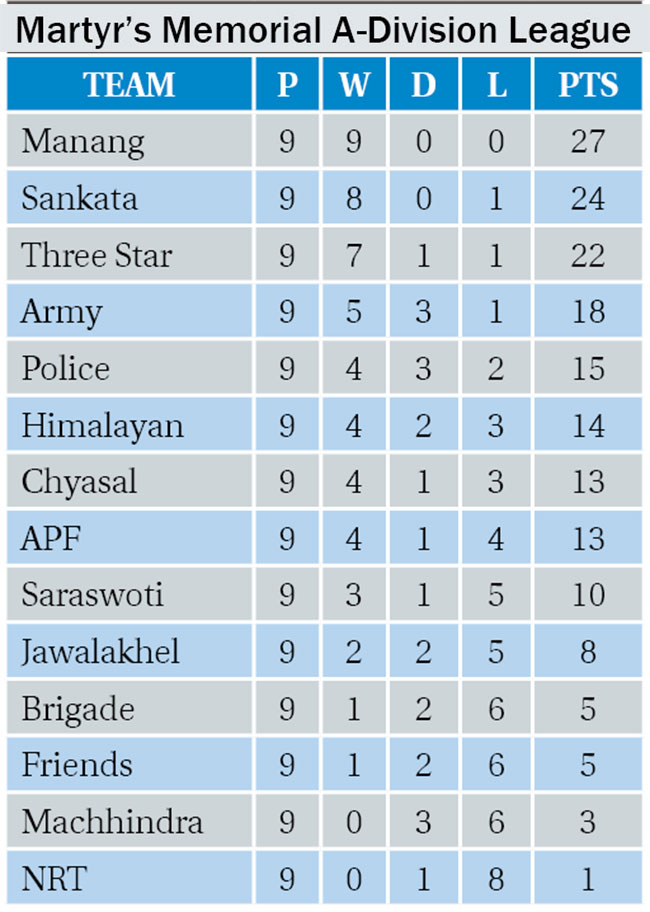