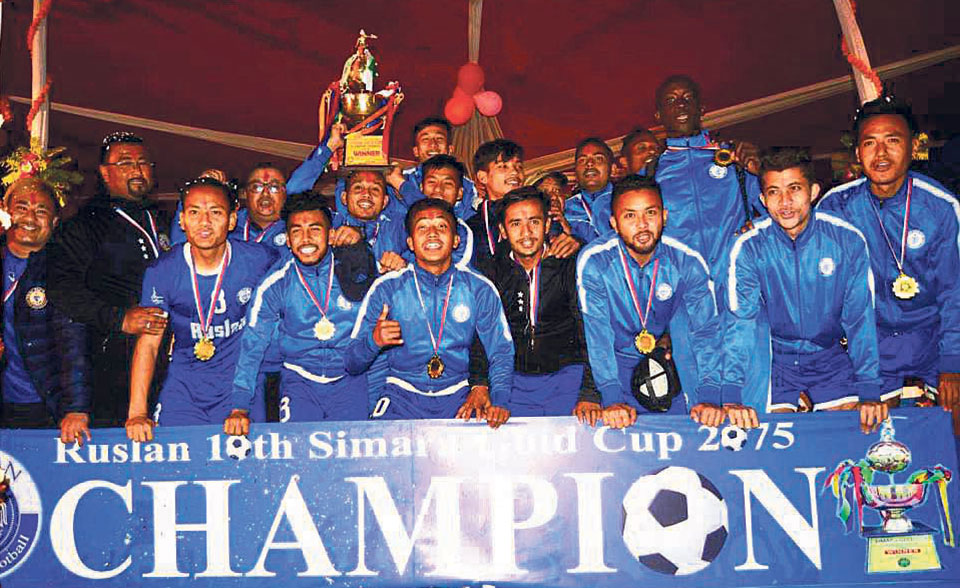 Members of Three Star Club pose with the trophy after winning the Simara Gold Football Tournament at the Simara Stadium in Simara, Bara on Saturday. Photo: Upendra Yadav/ Republica

At the final match played at the Simara Stadium, Three Star defeated Army to become the champion of the tournament for the first time.

Earlier, the match was pushed into the tie-breaker when the regulation time ended in a goalless draw. In the tie-breaker, captain Bikram Lama, Ananta Tamang, Rupesh KC and Ranjit Dhimal converted Three Star’s kicks, while Kuthu saved Sunil Bal’s effort.

Likewise, for Army, skipper Bharat Khawas, Dip Lama, Bibek Basnet and Santosh Tamang scored, while Kuthu could not score against his counterpart Neupane.

In the individual awards, Three Star’s Sushil Rai was named the best player of the tournament and was given a Yamaha Seluto bike. Alan Neupane, Adama Doumbia and Megh Raj KC were adjudged the best goalkeeper, the best defender and the best coach respectively.

Army won the remaining categories as Santosh Tamang and Tanka Basnet were named the best midfielder and the best forward respectively. They all bagged Rs 20,000 each.

Nawa Janjagriti Yuwa Club’s Nikesh Thapa was declared the rising talent and was awarded with a cash prize of Rs 15,000.