KATHMANDU, Feb 15: Manang Marshyangdi Club has ended its season in the third place after a slender 1-0 win over Jawalakhel Youth Club, while Three Star Club registered a 2-0 victory over Chyasal Youth Club, to secure the fourth spot in the ongoing Martyr’s Memorial A-Division League in Lalitpur on Friday.

Manang and Three Star shared the same story at the start of the season as the teams sold some of its star players to title contender Machhindra Club. And despite Manang coach Fuja Tope indicating that it’s the team quality that counts rather than the individual players, the team has underperformed this season.

Manang and Three Star finished on eight wins each, but the story of their struggle reflects different narratives.

Manang only faced a single loss this season which came against Chyasal, but it defeated Army and drew Three Star and Machhindra 2-2. However, Three Star was unable to beat any top three side after it losses against Army and Machhindra.

With the contrast between the sides, Manang finished just two points ahead of Three Star.

Meanwhile, in the other match of the day, Himalayan Sherpa Club came back from a goal down to defeat New Road Team 2-1, and finish in the 10th place.

In the late kick-off at the All Nepal Football Association (ANFA) Complex in Satdobato, a second half goal from Nishan Limbu was all but enough to ensure a vital win for Manang.

Despite a firm attacking pressure from Jawalakhel, Manang did well with its defensive tactics and did not let any of the losing team’s seven shots on target get into its post.

Manang had a few chances of its own as it had a total of nine shots, and four of them were on target. It dominated the possession in the match and also had a spell of domination with its good passing plays.

Jawalakhel got the first real chance of the game in just the fourth minute as Fode Fofana hit a shot from inside the box, but it was brilliantly saved by Manang keeper Deep Karki.

Manang then dominated the possession and looked for openings from the flanks in which Limbu’s crosses were the catalyst.

Pujan Uparkoti got a good chance for Manang, but his long range shot from outside the box in the 15th minute flew over the bar. He got another chance three minutes later, but it went just wide off the target this time.

Jawalakhel got two good back to back chances, but could not score a goal. Sujit Budathoki hit a good shot from inside the box, but keeper Karki saved in the 27th minute, and a rebound shot from Daddy Junior Wamba was saved again.

Wamba tried a shot in the second half in the 57th minute, but his effort from outside the box went over the crossbar.

Budathoki had a superb chance to draw the first blood in the game, but his header from close range hit the post in the 75th minute.

Moments later, Manang scored as Sushil Lama delivered a superb cross from the right wing looking for Limbu, who brilliantly scored to make it 1-0 for Manang.

Jawalakhel had another crack in goal as Simant Thapa hit a brilliant volley, but it was superbly saved by keeper Karki again four minutes from time. Karki came in for the rescue again as Dilan Loktam’s shot in the second minute of the injury time was saved by Karki again.

Karki was adjudged the man of the match for his superb goalkeeping performance.

With the win, Manang finished third on 28 points with eight wins, four draws and a loss. Likewise, Jawalakhel had already ensured a place in the National League with a top six finish as it ended in the sixth place with 19 points from five wins, four draws and four losses.

In the second match of the day, Lal Rammawia and center back Ananta Tamang scored their fourth goals of the season as Three Star defeated Chyasal 2-0 to finish fourth.

Nishan Khadka put a solid free-kick inside the box and Rammawia scored a bullet header to give Three Star the lead in the 70th minute.

Three Star then went on to score another in third minute of injury time as Tamang converted a spot-kick hitting the ball into the right corner to ensure a solid win for the team.

In the first match of the day, Sherpa recovered from a 1-0 deficit to beat NRT 2-1 with both its goals coming in the first half.

Ashok Thapa gave a pass to Rajesh Pariyar and he hit a shot from the right side of the box to give NRT a lead in the 31st minute.

Stephene Samir Dieubeni equalized for Sherpa in the 41st minute as his shot from the left side of the box went in.

Then, Tridev Gurung scored in the first minute of the first half injury time to give Sherpa the lead.

In the final match of the league on Saturday, Army will face Machhindra for the title. Army is on top with 29 points, while Machhindra is second on 28. 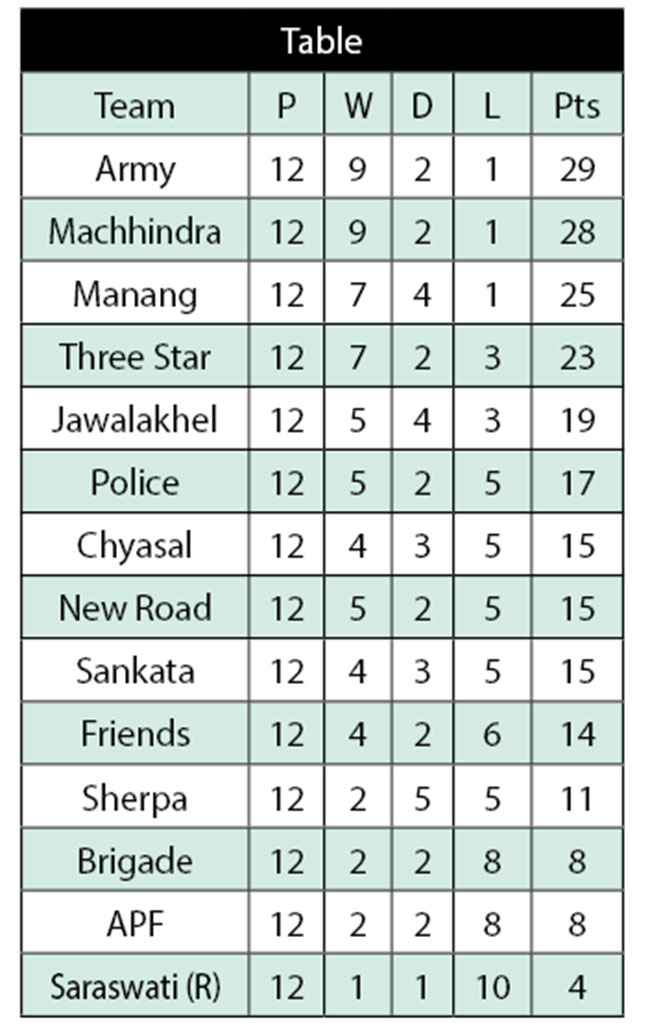 Manang too hot to handle after ninth straight win