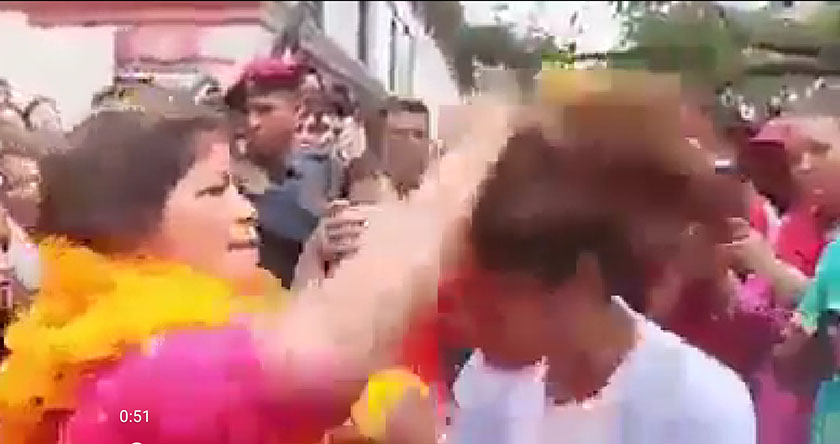 KATHMANDU, June 30: Nepal Police has come under fire over a viral video which shows a woman shaman assaulting another woman for allegedly being a witch.

The video which has been making the rounds on social media shows police constables becoming silent onlooker as Bishnu Kunwar, alias Dharti Maata, which literally translates to the mother earth, thrashes an unknown girl at Bhadrakali temple, in front of Singha Durbar – the administrative building of the government. One lady constable even appears to be helping Kunwar as her supporters in drove cheer her misdeed.

According to police, the victim was a random stranger who, like Kunwar, was there to worship in the temple.

Kunwar is a household name in Butwal, her hometown. Hundreds of devotees throng her abode in Kalikanagar seeking help to overcome evil spirits. Kunwar is also a known figure on social media, especially Youtube which she has long exploited to propagate superstition and dogmatic values.
The video generated a big uproar on social media. The incident also dominated a meeting of the federal parliament’s committee on women, children and elderly people, according to Narendra Pant, an official working in the committee.

Following the social media outcry, police arrested Kunwar from Balaju of the capital on Thursday. Superintendent of Police Ramesh Thapa said that Kunwar is currently under investigation for alleged assault and violence.

“None of our personnel seen in the video were on duty that day. But an investigation has been initiated on the matter. Action would be taken accordingly,’’ Thapa said. He said that Kunwar would remain in custody until the investigation ends.

“Nepal Police would not tolerate such inhumane activities that are being carried out in the name of superstition,’’ Thapa said.

However, Kunwar’s arrest proved too little and late to stop erosion of Nepal Police’s image, which of late has been suffering a lot of damage due to its handling of cases of violence against women.

Nepal Police has long found itself at the receiving end for its handling of domestic violence and cases of violence against women. Human rights activists and civil society members have expressed serious dissatisfaction over the way police dealt with Nirmala Panta’s rape case. Media reports show police taking side with perpetrators in several high-profile rape cases including the rape in Durbar Marg and Kanchanpur.

The incident has also come as a reminder of how superstition like witchcraft continues to remain a big problem. Despite significant changes in the laws, superstitious practices such as Chhaupadi, a practice wherein women are exiled to shed during menstruation, witchcraft and dowry are widely practiced. Many women are still becoming victims of acid attacks.

These superstitious and dogmatic practices have fueled cases of domestic violence and violence against women. Data maintained by Nepal Police show a total of 12,225 cases of domestic violence were reported in fiscal year 2074-75 BS, while 1,1629 cases were reported a year earlier. Police report also shows rise in other crimes like cases of rape, child marriage, human trafficking, and physical assault in the name of witchcraft.

Amrita Thapa, an MP from the ruling Nepal Communist Party who has long been voicing for women’s rights, says that a number of factors including the state’s failure to enforce laws and launch effective awareness programs are to be blamed for the rise in such crimes.

“Over the years, I think that there has been a significant decline in witchcraft. But women still face violence under various pretexts. I think that the state should do more to raise awareness. Similarly, we should encourage good practices and punish violence against women arising from superstition,’’ said lawmaker Thapa.

KATHMANDU, July 28: Nepal Police and Central Investigation Bureau have arrested a murder-accused 12 years after he committed the crime. Read More...

KATHMANDU, Dec 5: Data maintained by Nepal Police show that around 83 percent of the people who went missing in... Read More...