Police in political quagmire: Pandering to tastes of parties while in service, becoming politician after retirement

KATHMANDU, Sept 23: Allegations of political interference in Nepal Police are overwhelming. Almost every promotion is challenged at courts. The fact that the highest level of political maneuvering takes place in transfers is an "open secret". 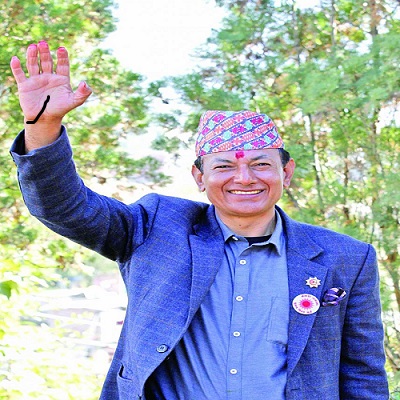 A proof of this has been given by former Inspector General (IG) Nepal Police Sarbendra Khanal. Even though he was in the police organization, it was not hidden that he was unofficially in the CPN-UML. But on Thursday, he formally joined the UML.

Retired police officers can join political parties. Khanal did the same. But the remarks he made while joining the party have exposed the politics within the police force. In the UML entry program, Khanal said that he worked for UML Chairman KP Sharma Oli even when he was in the police organization. He spoke for more than half an hour and sang Oli's praises.

"I faced about seven Prime Ministers during my service. During my tenure, I never met any other politician like Chairman comrade KP Oli. His words would always brighten me up,” said Khanal, “That's why I worked being close to him.”

He said that Oli and he did the best for themselves and for each other during his service. "I believe that I will still be provided a place under the cool shade of our respected comrade," he said.

Khanal recalled that when he was dealt with injustice during his service, he would go to the UML party office in Balkhu and meet Oli and said that he got justice from there. There are people who are of the opinion that Khanal had a “happy term” with the blessings of UML and Oli. He was promoted from DIG to IG on April 10, 2018 when the UML government was formed under the leadership of Oli. Another DIG, Ramesh Kharel, was dissatisfied when Khanal was appointed the IG and left the organization. Khanal retired on Feb 11, 2020 due to age limit. Even after retirement, he has accepted that he has worked closely with the UML.

As the controversy within the then CPN increased, Khanal was accused of being involved in the kidnapping of parliamentarians to sustain the Oli-led government. In April 2020, Oli introduced the 'Political Party Act Amendment Ordinance' to make it easier to break up political parties. The ordinance was brought to facilitate a split in the Janata Samajwadi Party (JSP). During the COVID-19 pandemic, it is alleged that former IG Khanal, UML leader Mahesh Basnet and then UML leader Kisan Shrestha reached Dhanusha on April 22, 2020 and kidnapped JSP MP Surendra Yadav and brought him to Kathmandu.

Earlier in 2018, the then DIG Nawaraj Silwal, who approached the Supreme Court after failing to become the IG, also joined the UML. Silwal had knocked on the court doors after the government led by Pushpa Kamal Dahal, who was in an alliance with the Nepali Congress, promoted Jay Bahadur Chand to the position of IG. That was an extreme example of partisanship within the police. Silwal went to the court after the then government made Chand the IG, who was close to NC President Sher Bahadur Deuba. The Supreme Court gave a short-term order not to appoint Chand as the IG.

The government appointed Dr Dinesh Chandra Pokharel as acting IG of Nepal Police. Silwal then resigned. He joined the UML without his resignation being accepted. After that, Silwal became a candidate for Member of the House of Representatives from Lalitpur-1 from UML and won the election.

These two ex-police officers are not the only ones who joined political parties and became politicians after their service period; the list of such police officers is long. They have been accused of "serving the parties" not only after retirement but also during their service. Dil Bahadur (DB) Lama, who became the IG during the Panchayat period, joined the Nepali Congress after the adoption of the multiparty system. After that, he was elected as a member of the House of Representatives on a Nepali Congress ticket from Rasuwa in 2000 and became the Assistant Minister for General Administration in the Sher Bahadur Deuba-led government in 2002.

He says that political interference in transfers/promotions within the police organization is common. "These days, police officers are labeled as being close to this or that political party right from the recruitment of inspectors. The parties use them accordingly,” said Thapa. He commented that the tendency to serve political parties and politicians while in office and join the parties after retirement is fatal for a healthy police organization.

Climate Finance and Accountability
32 minutes ago

Over 10,000 people enter Nepal via Gaddachauki in a week for Dashain
12 hours ago

US Acting Assistant Secretary Trudeau in Kathmandu
13 hours ago